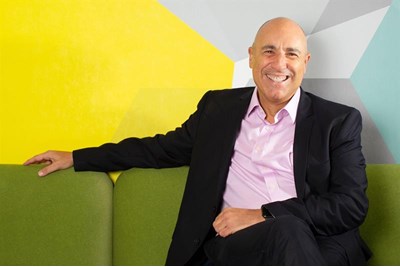 When HR magazine catches up with Simon Linares at Direct Line Group (DLG)’s Bromley head office it’s been a long time in the making. It’s taken several months and a fair amount of journalistic persistence (some would say pestering) to get in this HR director’s diary.

But it’s not that Linares is awkward to pin down or that he feels too busy and important to commit his time to an interview. Rather – in his own words – he “ha[s]n’t done one of these ever as [he] think[s] it’s more important that people look back and go ‘oh they did that in that organisation’”.

Boasting about your successes is not the way things are done at DLG, Linares explains: “The culture is ambitious and successful without any arrogance. We’re quite humble – most companies brag about the things they do but we just quietly get on with the job and don’t make a lot of noise about things.”

And yet make noise he should. Ranked fourth in HR magazine’s HR Most Influential Practitioners 2018 list, Linares must be doing something right.

Linares joined DLG in September 2014, around two years after the insurance company split from RBS and started trading on the London Stock Exchange. “There are three versions of the history of Direct Line,” he says. “There’s the seven-year-old version, which is since the IPO [initial public offering]. There’s the version that’s a bit longer where we were a division of RBS. But if we go back to the beginning about 35 years ago, we were effectively a digital disruptor.

“The whole reason Direct Line started was that when people wanted insurance they went to a broker on the high street who put them in touch with an insurance company that then sold them the insurance. We used the new technology of the time – the phone – to say ‘just come directly to us’ and took out that whole model. What Uber and Airbnb do now is what Direct Line started, in terms of disrupting a whole business model.”

Today the group is home to a range of insurance brands including Direct Line, Churchill, Green Flag, Direct Line for Business, NIG, DLG Partnerships, Privilege, Shotgun and DLG Auto Services. It employs around 11,000 staff based in various contact centres, commercial satellite sites, and accident and repair centres up and down the UK. Frontline contact centre staff – made up of personal lines (sales) and claims – account for almost half (4,500) of the workforce.

Linares’ remit is something of an unusual one. As well as being responsible for the 250-strong HR team, he also leads CSR, internal comms and external comms, including government and public affairs. While the latter typically sits in marketing, in Linares’ eyes his responsibility for it makes “sense”.

Such an overarching approach was needed when Linares took the helm of these functions back in 2014. “The business had been through a lot of change and had to look at a lot of efficiencies. So it was the perfect opportunity to say: what’s the business trying to do from a strategic point of view? What do we need to build? What do we need to protect? And what do we need to change?” he recounts. “It was a whole new company and wanted to be something distinct.”

One thing Linares quickly realised was that, in the aftermath of such change, he needed to focus on rebuilding employee engagement. The first step has been to move from a traditional satisfaction measure, which Linares says “HR often uses because it makes us feel better”, to a new model that categorises each employee in a similar way to customers: as champions (highly engaged and want to stay), blockers (disengaged and want to stay), disconnected (disengaged and want to leave) and mercenaries (highly engaged but don’t intend to stay long term). “We think about our colleagues in the same way we think about our customers – about what makes each of them tick,” he says.

However, rather than dismissing blockers as lost causes, Linares is confident they “can become our biggest champions”. Because “if someone who’s been here 20 years is engaged and passionate, everyone else starts to believe it and get behind it as well,” he says.

He’s also quick to dispel assumptions that contact-centre staff are the most difficult to engage. “We have a higher engagement score in our frontline than for our senior leadership,” he says, adding that turnover is also low compared to typical contact centres at sub-20%.

Claims staff deal with highly-emotional customer circumstances, he explains. “When your kitchen is on fire and your partner is crying, these are the people who stay on the phone to you, help you and reassure you someone will be with you in the hour.”

So the company feels it’s critical to offer these staff a broad range of support – everything from the ExCo personally handing out 1,200 cupcakes in the Doncaster site, to eight to 16 weeks’ training before these frontline staff are allowed to even speak to a customer. Performance targets have also been redefined in the claims teams, as “you can’t put a standard time on those calls”, Linares adds.

And in the sales and service teams all financial incentives are now based on getting ‘gold-level’ customer feedback. “What makes us different is our level of service,” says Linares. “At the start of every shift every employee reads their customer comments from the day before. So it puts front of mind what they need to think about when talking to customers today.”

It’s a far cry from the “chicken-pen call centres” and scripted, target-driven cold calling that often springs to mind in relation to such workplaces. As Linares insists: “They’re not chicken fodder for us – they’re highly-skilled, highly-trained people who handle really complex calls.”

The importance of this workforce is something Linares personally appreciates, having spent the first 10 years of his own career in sales. “I left school convinced I wanted a career in banking, then worked out banking wasn’t for me so went into sales where I realised what I really loved was developing my direct reports,” he says, adding that this was his “bridge” into sales training and then into “what I realised I really wanted to do”: HR.

These experiences gave Linares the commercial acumen that HR leaders need today, he feels. “In HR you do a lot of influencing and we have to think of our employees as customers increasingly, so a sales background is helpful,” he muses. That said, he’s conscious that there are pros and cons to pulling on his own experience when doing HR for a sales workforce.

“It’s good because you’ve done some of the things they do so you’ll never forget,” he says, adding that this is partly why he was “passionate” about graduate-scheme joiners having to spend six months of the scheme in a contact centre to appreciate the work the frontline does. But the downside, feels Linares, “is the danger [he’ll] think [he] knows what people in sales in 2019 feel”.

“The world’s moved on,” he explains. “You have to be careful as you can have a lot of empathy, but you can equally be out of date.”

To this end Linares has been keen to change how all senior leaders connect with the wider workforce. “There was a misconception that you can’t get onto the ExCo if you haven’t been to Oxford or Cambridge,” he says. “I left school at 16 and didn’t do A-Levels, yet there was a misconception.” This “forced us to rethink how we interact informally”, Linares says. “It’s about what type of leadership and tone from the top we want to set and stand for as a company.”

The answer, he says, relates to the core value of “bringing all of yourself to work”: “One of our main priorities over the past four years is how do we value individuality and uniqueness and create a culture where people can be completely open and honest.”

This means a focus on attracting – and celebrating – diversity. A key part of this, and something Linares is especially proud of, is the This is Me campaign launched in 2018. This encourages people to bring their whole selves to work and talk about who they are – in meetings and face to face, but also through hashtags, the company intranet and most recently via a video campaign (“I’ll give you three guesses what the background music is,” Linares jokes).

“This is Me has become a way of saying ‘I need to talk to you about something – I need to have a This is Me conversation’,” he says.

Critical to its success, he believes, has been opening up the conversation around mental health “not as a problem but as a solution”. “It’s a test of whether we have an open honest culture. As if we can get to a place where everyone can talk about mental health comfortably, then you’ve got a culture where there probably isn’t anything people feel they can’t talk openly about,” he says. “I’ve never seen something catch the way it did.”

Other commitments to diversity and inclusion have included efforts to promote “silent stars” (“the people who are doing a really good job but aren’t putting their hands up”), and to recruit individuals on the autistic spectrum into roles that Linares says they tend to be better suited to than neurotypical employees.

Which is why he rolled out a programme all around managers understanding their own personal purposes. “Ask anyone who’s gone through it what their purpose is and they’ll be able to tell you,” he says. “Then the question is: how do you connect your personal purpose to your job as a team leader?”

Linares certainly practices what he preaches. He recalls the “single-biggest pivotal” career moment that shaped his own personal purpose today.

“When I got the Spain job [working in HR in Madrid at Diageo], about a year later I found out I’d got it because somebody had challenged the people making the decision by saying: ‘how long does someone have to be in HR before they’re no longer seen as the salesperson in HR but as the HR person with sales experience?’” he recalls.

“That’s why my personal purpose is around people having the choices to live their lives to the fullest. Because one person made a huge difference to my opportunities; therefore I could make that difference to someone else.”

That “someone else” could be the new CEO, as the organisation prepares to take on a new leader and so with it new business and people strategies. It could be a new neurodiverse recruit, as Linares plans to take D&I even further. Or it could be one of the many digital natives he expects to recruit to help DLG become “a really digital agile organisation”.

“It’s about being bold and disruptive,” says Linares. “There are things we offer that no-one else in the marketplace can.”

Brexit in the workplace

Culture HR in the boardroom  by Jo Gallacher
December 03, 2020