Tanni Grey-Thompson: Disability targets give a false picture of progress 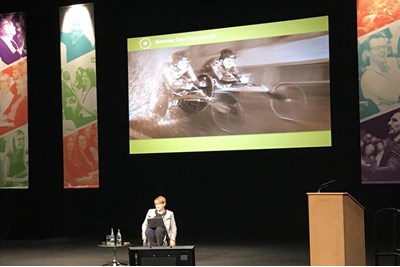 Disability targets could be giving a false picture of progress on D&I in organisations, said Tanni Grey-Thompson, record-breaking Paralympic gold medalist and cross-bench peer of the House of Lords.

“One thing I’ve seen in the last two years is that some companies have changed their definition of disability and broadened it out a lot more, so some say they have now hit their target on disabled people,” she said, pointing out that this means firms look good on paper but haven’t actually recruited any more disabled people.

Speaking on day two of CIPD Annual Conference and Exhibition, Grey-Thompson said that HR professionals have a “tough” job encouraging their organisations to recruit a more diverse range of people. “The tough thing working in HR is it’s meant to be about people but also it’s about process,” she said. “And sometimes when someone is seen as a high flyer in the organisation, and has been allowed to get away with not hiring a diverse workforce and with going back to the same people they know all the time, it’s hard for people in HR to challenge that.”

Grey-Thompson recounted how one businessperson said to her recently that it’s “really hard to recruit disabled people”.

“People are nervous and scared of talking about disabled people and that sets standards and behaviours that aren’t helpful,” she said.

While progress has been made in other areas of diversity and inclusion, disability is lagging behind, she added: “You couldn’t get away with saying you’re not comfortable talking to women, but things in disability get left to last,” she said, adding that firms often say: “we’ll do disability next year”.

“I want change to happen now – we need people to take the time to think about how to do things differently,” she said, adding that the message needs to come from senior leaders.

Communication is critical to reducing the employment gap for disabled people, she added.

Grey-Thompson shared her experiences of being born with spina bifida and becoming a successful Paralympic wheelchair-racing athlete. She shared how “growing up [she] didn’t see anyone that looked like me."

"Disabled people were locked away and were in segregated education and were not expected to get a job," she said, adding: “It was before we had words like 'diversity and inclusion' and 'equality'."

When people told her parents she wouldn’t be able to do things in life because of her disability, her parents dismissed them and even “threatened to sue the secretary of state for Wales” for trying to stop her going to a mainstream school, Grey-Thompson reported.

She explained how being an athlete is “glamorous” but also a lot of hard work. “They teach you to train hard as an athlete but they don’t teach you resilience and mental strength,” she said.

Though she competed in an individual sport there was a lot of focus on being in a team, with support from psychologists and counsellors for example, she said. When she made the move from athletics into politics this training group continued to act as critical friends. “That critical friend is really important in a trusting relationship,” she said.