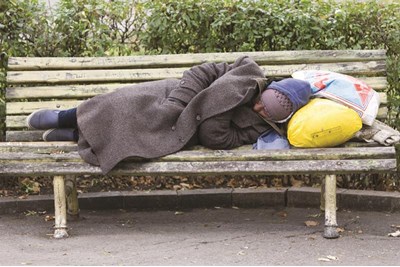 Many factors causing homelessness are out of employers’ control, but they can still lend vital support

More must be done by employers to support staff affected by homelessness, according to experts.

The issue recently received increased focus as a result of research from Shelter, and a Channel 4 Dispatches programme. The research found that 55% of families living in temporary accommodation are working, representing 33,000 UK families.

While there are now more people in employment, a Freedom of Information request carried out by Shelter showed that between 2013 and 2017 the number of working families in temporary accommodation rose dramatically by 73%.

The Dispatches documentary revealed the ‘double lives’ of the working homeless who had jobs in security, education, retail, and hospitality, among other sectors. It featured a homeless security guard working at Prada in Bond Street, and another interviewee who had become homeless after her marriage ended but had kept her job in adult education, who said she used bathrooms in McDonald’s to wash before work.

The reasons behind homelessness are varied but are primarily the result of rising rent costs, a ‘chronic lack of affordable housing’, and the stringency of the benefits system, Shelter’s research concluded.

While many of these factors are beyond employers’ control, they still have a key role to play in supporting affected employees, said head of employment initiatives at the Single Homeless Project Joe Mitchell.

“This is definitely something we’ve seen more of over the past few years. We are contracted across London to help people get into work and education but we’ve started to see that people don’t just need help getting work; they need help sustaining their jobs,” he told HR magazine.

“There’s a lot of stigma around admitting you’re homeless, and it often turns out that employers are unaware of the problems. People without housing don’t feel they can turn to their bosses. It’s really important that employers understand the reality of life for some people in their workforce.”

People struggling with both their mental health and insecure housing are often trapped in a vicious cycle, Mitchell added. “A decline in mental health is one of the biggest causes behind both homelessness and workplace issues,” he said. “Even if [someone does] find housing, it isn’t necessarily stable. The stress of knowing that they are just one decision from a landlord away from being homeless again is immense.”

Robust policies around mental health and wellbeing can help minimise some of these pressures, said Mitchell: “It really comes down to the basics of management; asking the right questions and taking time to understand the issues at hand.”

Helen Giles, executive director of people and governance at St Mungo’s, added that those dealing with or who’ve dealt with homelessness can bring a lot of positive attributes to an organisation.

“There are all sorts of reasons that can lead to someone becoming homeless; it’s very complex. We know that under a good employer work can really help to improve the lives of a lot of people who have been through a lot of extremely difficult experiences, and get them out of the cycle of homelessness,” she told HR magazine.

“Some employers will have a lot of misconceptions about homeless people, including doubts over their reliability. That’s a shame, as they can use their experiences to help others who might have been through similar situations, and can be invaluable in charities or support roles.

“People who have been through homelessness can often make the most loyal, committed, open employees if they are shown the right support.”