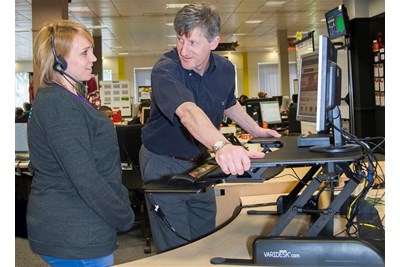 Hello, has your experiment finished? how has it gone? what are your conclusions?

The longest-running scientific experiment into standing desks to date has been launched by the University of Chester and Virgin Media.

Twenty-four employees at Virgin Media’s Sheffield contact centre have volunteered to use adjustable sit-stand desks and stay on their feet for a minimum of two hours each day.

Research by the British Heart Foundation suggests that the ever more sedentary lifestyles of UK office workers can result in increased risks of serious health problems. Sitting for long periods of time can result in greater risk of type two diabetes and cardiovascular illnesses for example.

A person could burn around 30,000 extra calories per year – which equates to half a stone of fat (7lbs) – simply by standing for two to three hours a day at work, previous short-term studies have shown.

University of Chester researchers, led by professor of applied exercise science John Buckley, will measure the effect of standing on physical health, psychological wellbeing and productivity.

Buckley said: “The simple act of standing for even as little as two hours per day can increase muscle activity and have a significant impact on health and wellbeing. This unprecedented study with Virgin Media will allow us to gain a more comprehensive understanding of the benefits working on your feet can have on health and performance.”

Maurice Daw, chief people officer at Virgin Media, commented: “We are always looking for new ways to improve our people's health and wellbeing. The results of previous studies are impressive and we are looking forward to working with the University of Chester to explore the longer-term benefits achieved from this way of working.”

He added: "This is a long term health and wellbeing and engagement initiative. We want to look after the long term health of employees. That's why we're doing this as a scientific study rather than just putting some standing desks in and seeing whether people feel more enagaged and healthier short term."

The experiment will run for one year, with one group of employees using the adjustable height desks for six months, and then a second control group doing the same.

Virgin Media plans, if results are persuausive, to roll sit-stand desks out to other employees acrosss the company. "We won't make this mandatory though," said Daw. "It will be up to individuals."

Hello, has your experiment finished? how has it gone? what are your conclusions?

Hi Harry There appear to be no publicly available results from this experiment just yet. However, it will take time to fully analyse and write up the results so do keep an eye out... The HR magazine team conducted a (very unscientific) experiment on standing desks of our own, which you may be interested to read: http://www.hrmagazine.co.uk/article-details/hr-editorial-team-tries-standing-desks