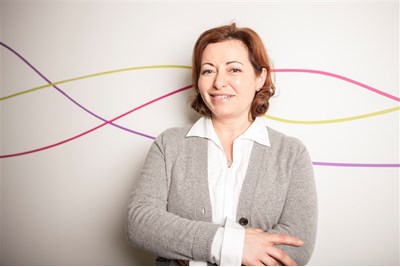 At Sodexo people are the only asset. HR magazine met its European HR director Natalie Bickford to find out more

“It’s people cooking, sitting on reception desks, manning security, pushing trolleys in hospitals,” she continues. “People are the only product we’ve got. So how you treat, recruit, reward, develop and retain your people is critical to the success of our organisation. HR is genuinely and tremendously valued. That’s why I’ve stayed here so long.”

Bickford joined Sodexo as UK & Ireland HR director in 2008, from pharma firm AstraZeneca. Coming from a highly regulated industry, she joined Sodexo at a time when “there wasn’t much in place” and the business needed attention on its people.

Her time in the UK role included putting in talent management processes from scratch and launching extensive work around diversity and inclusion, all of which contributed to her being ranked the 18th Most Influential HR Practitioner in the 2014 HR Most Influential list. Oh, and she led HR during a little project called the London 2012 Olympics, where Sodexo was responsible for catering across much of the Olympic Park.

In September 2012, Bickford was promoted to HR director for Europe, and she is now responsible for 150,000 employees across 24 countries, from established markets such as the UK and France to smaller ones including the Nordics, Hungary and Romania, as well as what she calls the “big growth engines” of Russia and Turkey. Although these fast-growing markets have challenges – Bickford says 100% turnover is not unusual, given the number of opportunities available – she is excited by the “enormous potential” of emerging markets.

“The people and the culture might be different, but you can always find great ideas you can bring from one place to another,” she says. “I try to work with local HRDs to ensure we don’t recreate the same process 24 different ways. We tend to develop things for everyone, in an inclusive way. We are a low margin business and we don’t have big budgets, so we need to find [other] ways to be effective.”

Maximising effectiveness against a backdrop of tight margins has included a major, cross-Europe focus on engagement – but despite this reach Bickford says she wanted to keep things simple. “You can get very busy with employee engagement, trying to do lots of initiatives, reporting on them, and then creating more,” she believes. “We wanted to get back to the fundamentals.” That covers making sure everyone, whatever their role or level, has access to training, and focusing on recognition for all.

One issue Sodexo faces around engagement is the fact its people are spread across a variety of sites and sectors, from defence, to hospitality, to the NHS. “With first generation outsourcing, someone might have been working somewhere for 10 years and then suddenly find themselves working for us, and it’s very important they don’t just feel that Sodexo is a name on the payslip,” Bickford explains. To tackle this, Sodexo runs a ‘Brand Ambassadors’ programme to help people on the frontline understand more about the organisation.

Bickford is keen to stress that training, career development and performance management are for everyone – frontline employees as much as back office and more senior staff. “The issue is making sure that people are aware the training is there, and that they are supported by their manager to take part in it,” she explains. “If you are committed and want to grow, the opportunities are endless.”

She adds that the hospitality sector has a perception problem in the UK, which doesn’t exist in other markets. “In the UK people see it as a transitory career, which is a shame as it’s one of few sectors where you can find yourself managing a large team early in your career,” she says. “In France, Spain and Italy, working in hospitality is seen as much more of a career.”

In a bid to increase career opportunities for frontline staff, Sodexo recently extended its approach to global mobility. Whereas international mobility used to be constrained to more senior positions, frontline staff can now register an interest to move, the languages they speak and where they would like to go, and country offices can advertise vacancies.

Bickford gives the example of a Spanish-speaking French chef keen to go to Spain, who was able to find the perfect role in a French-style café in a Spanish bank. “It costs the organisation nothing, and people feel valued as they can pick themselves up and move around the group,” she adds. “That helps people see us as an organisation that values them.”

In the outsourced services industry and hospitality more widely, pay remains a tricky issue. Should companies like Sodexo commit to paying the living wage? Bickford says that while a “tiny proportion” of the workforce is paid the minimum wage, the vast majority – she estimates well over 90% – receive more. The challenge for service providers, she adds, is that the client often has the power to decide what the pay will be.

In addition, Bickford says the organisation tries “very hard” to do more around non-financial reward, such as on-the-spot recognition and award ceremonies. Benefits can be extended to family members, and the company is rolling out access to a global employee assistance programme to every employee and their family.

One of Bickford’s personal passions is diversity, in particular gender diversity. She is chair of Women 1st, which promotes the role of women within the services and hospitality sector, and has both championed and formalised Sodexo’s commitment to diversity in her seven years there. Key achievements include enhancing maternity benefits for all staff and introducing inclusion training for all UK managers. She has also created a thriving women’s network, which currently has about 1,000 members across the UK.

“The thing I like best about [the network] is that it’s a completely different cross-section of the organisation,” she reflects. “It’s not about which business segment you work in, or where you are in the hierarchy. It’s a group of women who come together because they want to, and that’s powerful.”

Sodexo is careful to manage its metrics, she adds, citing that 33% of the UK executive committee and 30% of the UK’s senior manager population are female. And keeping an eye on the pipeline of female talent is critical. “It’s easy to hire senior women to affect your statistics, but actually you’ve got to employ women, develop them, train them, engage them and retain them, so you have that pool of women to come into senior positions,” she says, adding that this can be a particular challenge in operations.

For Bickford, flexibility is something “[UK Plc] still need[s] to unlock”. “In a career where you are going to be working until 70, what difference does seven years of flexible working make?” she asks. “And yet we are still so wedded to the concept that you have to be at certain levels by certain ages. We’ve got to stop that thinking, because it’s no longer relevant. Different generations aren’t going to accept that you have to choose between work and life. We need to see it as a much longer journey. People will reach their potential at different stages in their lives.”

She herself is a case in point, a role model for more flexible working patterns. Although her desk is in France, she lives in England, travelling around her 24 markets as required. “My boss only cares that I deliver the output,” she says. “He doesn’t care where or when I am doing it. If you are prepared to set the strategy, set the direction, manage and support as needed and review outcomes, you can let your people work in a more flexible manner.”

For more operational roles, she is an advocate of job sharing and part-time work: “Part-time can really work for a few years and it doesn’t mean you’re going to work part-time forever.”

More widely, she believes the government is focusing on the wrong area of gender diversity, and would like to see more focus on executive boards: “There are sufficient women now to take up main board positions, but we should be focusing on operational and executive roles much more heavily.”

Of course, diversity is wider than gender and Sodexo does work in other areas too. In the UK it has even launched a generations network to encourage people of different ages to learn from each other. “It’s the same as with gender and race,” believes Bickford. “If you get a good balance of people with different skills and experiences coming together, you will get a better outcome than if it’s homogenous.”

She would like to see those different skills and experiences reflected in the backgrounds of CEOs too. “I’d like to see the group HR director being promoted to CEO, rather than it being the group CFO,” she says, adding that she believes HR is “meriting a much more positive reputation” now, and that, “as long as we are careful not to tie organisations up in process”, the future is bright.

“As soon as you start to prove the link between engagement and financial outcomes, people in the boardrooms start to pay attention,” she adds. “If you invest in people – emotionally, financially and in their development – and they stay, that’s got to be the way to go. It’s like diversity: that used to be about not ending up in court, but now companies see it as a tool for delivering better business results. It’s not something to be afraid of, but something you should embrace.”