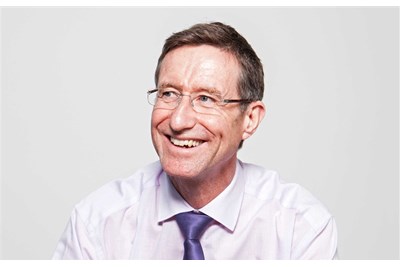 Toby Peyton-Jones, UK and North West Europe HRD for Siemens discusses how skills, automation and innovation will shape the future of work.

Every day, somebody working at German industrial giant Siemens could invent something that helps push their colleagues out of a job, or into a new one. With 20 innovations created every day – almost one an hour – the challenge for Toby Peyton-Jones, HR director for UK and North West Europe, is to try and make sure Siemens doesn’t lose talent.

In between the headline grabbing stats about the dearth of young people choosing STEM (science, technology, engineering and maths) careers and a rapidly ageing manufacturing workforce, Peyton-Jones believes many people who will be employed at Siemens in 10 years time “are already here”.

“It’s about up-skilling them,” he adds. “Every one of our inventions is putting one set of people out of a job, and a new set of people into a job. We want that set of people to be the same.”

He uses the example of a new 6 MW wind turbine, which has no gearbox because “having all those moving parts on a wind farm out at sea isn’t a clever idea”. Removing the gearbox means a set of specialist skills suddenly becomes obsolete – what is needed is expertise in electrical direct charge.

“I see it as a conveyor belt that we need to keep people on,” explains Peyton-Jones. “Technology drives itself and the pace of innovation is getting much quicker. Technology is driving a spiral of innovation and the skills pipeline is critical moving forwards.”

It’s timely to be having this discussion. In the months before we talk, Peyton-Jones, a UKCES commissioner, has been promoting UKCES’s report: The Future of Work: Jobs and skills in 2030 (see below). “The work we’ve been doing with UKCES is very much played out day-to-day in the business,” he says. And after our meeting, it’s reported that Siemens’ plans to restructure into nine divisions from its current 16 could affect up to 11,600 workers worldwide. “The aim is to simplify the company structure and get closer to the customer by moving capability towards growth regions,” says Peyton-Jones in a follow-up conversation.

CEO Joe Kaeser has denied reports of mass redundancies and a company spokesperson has confirmed at least some redeployment, saying: “Removing jobs in one area does not necessarily have to mean job cuts.”

Beyond this programme of organisational change, it’s the wider issues around skills, engineering in the UK and the future of work itself that are occupying Peyton-Jones. He clearly relishes a challenge and thrives on variety. After originally training at Sandhurst for the Royal Engineers, he chose to study zoology and psychology rather than engineering. His first job out of university lasted three months – “I found it too boring” – and he decided to take to the high seas instead (literally). He spent three years as a professional sailing boat skipper, before finding the first job he really enjoyed: working in leadership and development training. From there, he started doing training work with Manchester Business School, then moved into consulting, before joining Siemens 20 years ago.

“Since joining, I haven’t had to leave to get a new job, I’ve moved into completely different fields every three or four years,” he says. Those fields include L&D, working in Beijing, managing M&A, setting up shared services in the UK and now leading HR.

“We have a fairly ambitious programme throughout the business,” he explains. “Due to the pace and rate of change, HR is absolutely the killer app for achieving our goals. If you don’t have the people on the ground to deliver that, you’re going to be in really big trouble.”

The fact there’s a STEM skills shortage in the UK is no secret. To tackle it, Siemens runs outreach programmes to tell teachers, parents and children about careers in engineering. As well as extensive relationships with schools near its manufacturing locations, Siemens has recognised a need to reach a wider population, and developed a range of free online games for children.

At the other end of the age spectrum, 30% of Siemens’ manufacturing workers are over 50. “And with the retirement cap lifted, we don’t know what the flight path of those people will be,” Peyton-Jones points out. Some commentators have predicted an intergenerational conflict in the workplace, but he sees increasing age diversity as a positive. “If you get the culture right, it will be really exciting to see all those generations working together.” It also means organisations need to rethink their comp and benefits strategies and terms and conditions, he adds: “If you’re on a retirement flight path, you might only want to work three days a week, but you could still be an extremely valuable employee. We need to listen and respond.”

In its mission to further boost the profile and reputation of engineering in the UK, Siemens recently opened The Crystal, a visitor attraction that showcases its expertise in green technologies. Found in east London, it is one of the most sustainable buildings ever built and hosts the world’s largest exhibition on urban sustainability. “People can see it is engineers who are going to solve these problems,” explains Peyton-Jones. “Engineers see climate change not as insolvable, but as a problem that needs a solution. Engineers are the architects of the future.”

Innovation in the UK

He is keen to stress the UK has traditionally been strong at innovation, so why should we lag behind now? “We might have lost sight of some of the aspects, but that sense of innovation is still here,” he says. “Look at automotive: we are manufacturing more cars than ever before.” He cites the 6 MW wind turbines (each the size of the Gherkin from blade to base) and medical advances that allow surgeons to see inside the body in 3D while operating as two innovations from the past year that have most excited him.

This all means HR has no choice but to become much more innovative. “Part of our innovation is an HR transformation programme, which makes far better use of technology. We will have a more empowered organisation, because people are being empowered at home.”

The use of technology will give his department more data on human capital, enabling it to provide dashboards at the push of a button. “We will come to the table, a little bit like the finance function, with an important agenda around the intangible assets of the business,” believes Peyton-Jones, who is involved with the CIPD’s Valuing your Talent initiative. “Making the intangible assets of the business transparent will become a defining point in the role of HR.”

This increasing level of automation also means “individuals will need to take on more responsibility for keeping themselves up to date. With that, you see the importance of changing the whole skills model. The idea of an employer-led landscape of skills development is very important,” he adds.

Peyton-Jones is practising what he preaches: Siemens has been involved with the Government’s pilot of Employer Ownership of Skills. “Governments around the world have realised a demand-driven model is necessary simply because the pace of change means the only people who know what skills are needed tomorrow, let alone in five years, are the businesses themselves,” he explains. “Employers must take a leadership role in reaching out to providers, saying this is what we need, establishing standards and making sure quality is up to scratch.”

What is needed is a strong collaboration model, where learning and earning becomes far more common, even within university degrees, he says. “Those topics are hugely important for UK Plc, as well as companies like Siemens who are trying to deliver some rather ambitious projects.”

He admits there have been some “extremely painful” contracting issues around delivering EOS that need to be ironed out, and calls for a PAYE model where funding flows directly to employers through the tax system: “I think it would bring stability to the system, which would be extremely beneficial and hardwire the employer-led model.”

To encourage more SMEs to take up EOS, he proposes the skills agenda be reframed as a community issue. “A lot of this training becomes a community activity whereby the region identifies what it can be good at and does that,” he adds.

By building those skills, could we see further repatriation of UK manufacturing? In Lincoln, Siemens is the largest employer, embedded in the local community and university.  “We have a full pipeline there, from schools, up to universities, then through to R&D,” says Peyton-Jones.

Siemens’ UK daughter company is actually older than the German parent company, he adds: “It was set up here because of the industrial revolution and the skills in the UK. It’s a massive cultural heritage for rebuilding our confidence in this area.” After all, however the UK’s skills and employment landscape evolves, no organisation can look to the future without a healthy respect for the past.

The Future of Work

“There is no doubt we’re going to have agility and flexibility permeating all aspects of what a job is and isn’t,” says Peyton-Jones. In the UKCES report The Future of Work: Jobs and skills in 2030, researchers identified four potential scenarios for the UK’s economy and the impact on work. They are:

1. Forced flexibility: Greater business flexibility and innovation in many UK sectors leads to a modest recovery of the UK’s economy, while a sharp rise in flexible working changes the way many do their daily duties. For highly skilled individuals, a progressive work environment allows for greater autonomy and a better balancing of work and family life. While the “squeezed middle” of the workforce sees jobs disappearing, low-skilled workers compete ferociously for positions.

2. The great divide: Robust growth occurs, driven by strong high-tech industries – particularly in life and material science industries, but a two-tier society has arisen, with a divide between the haves and have-nots. While highly skilled workers are in demand and can be choosy about their terms and conditions, lower skilled workers are limited to poorly paid jobs with fewer career prospects. Flexibility, transparency and employee engagement are widely adopted by business, but their application is effectively limited to the highly skilled.

3. Skills activism: Innovation in technology drives the automation of professional work, prompting an extensive Government-led skills programme to re-train those whose jobs are at risk. Employers find it harder to fill vacancies, due to increasing skills mismatches, and become more involved in skills development. Employees can face long periods of unemployment, as work is mainly project-based, with a high turnover of jobs.

4. Innovation adaptation: In a stagnant economy, productivity is improved through a systematic implementation of ICT solutions. Employers reduce their workforces to a minimum and virtual workforces complete tasks that were once handled in-house. Limited projects and zero-hours contracts are commonly used to transfer risk to employees.