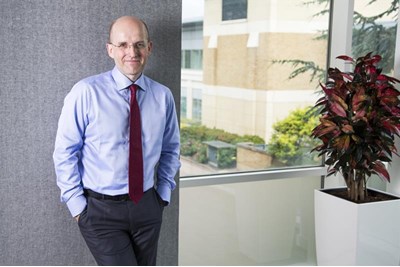 A new senior leadership team has shaken things up at IMI, but a three-pronged HR strategy has helped its HRD leverage change for success.

Geoff Tranfield is very clear how he doesn’t want HR to be seen at engineering company IMI. During our interview at IMI’s HQ just outside of Birmingham, he shows me a short clip of a scene from Clint Eastwood classic Dirty Harry. In it, Harry is told he’ll be transferred to personnel. His response: “Personnel? That’s for assholes.”

Tranfield uses the clip in internal presentations to his HR team, to break the ice and show what he doesn’t want. “I’ve got a real thing about HR being at the centre of things,” he says. “You can be on the periphery or you can be in the middle of it. What I learned early on is that if you’re not well connected as part of the leadership and at the centre of things, you’re nowhere. Then HR rapidly becomes a much-despised transactional service. In my role, I should either be a key part of the senior leadership team, or I shouldn’t be bothering.”

That possibility is not much of a risk for him personally. He joined IMI from oil and gas firm Petrofac precisely because he was attracted by the opportunity to be central to the success of a fresh leadership team.

“The appeal was that a new CEO [Mark Selway] was coming in,” he recalls. “The previous CEO [Martin Lamb] had been here for 13 years. That was an interesting challenge because when someone has been in charge for that long the succession piece is really tricky. Supporting someone to make that transition was part of the draw.”

He’s also a firm believer in continuous improvement, both personally and organisationally. “If you’re doing a senior HR role in a listed company you have a certain shelf life,” he says. “After six years you’ve probably added most of the value you’re going to, and with the pressure on companies to keep improving a fresh pair of eyes is a good thing.”

It turned out that the challenge ahead wasn’t just going to be supporting a new CEO, as Lamb’s retirement led to a ripple effect – in less than two years IMI has installed not only a new CEO but a new chairman, new NEDs, a new CFO and “about half the line guys”.

But while perhaps it wasn’t quite the dream succession strategy, the challenge to help the management team become highly effective as quickly as possible has been an appealing one. “It’s been about getting the best people in and helping to meld them as a team,” he says. “We have staff who have been here for many years and new people: how do you get those two cultures to come together?”

It’s not surprising to hear that alongside the fresh eyes of the senior leadership team has come a revamped strategy, and one that requires a different kind of HR. IMI has a long heritage, having existed since 1862, and historically Tranfield describes it as running “more like a conglomerate”. “You had more than 100 P&Ls, lots of geographical dispersement and [units] running as separate businesses,” he recalls. “Now we want to run it as a coherent engineering business, with much more collaboration.”

“In a listed environment everybody is chasing growth in a global economy where there isn’t much growth to be had,” he adds, on the decision to shift strategies. “You have to look at what would be most effective in delivering growth and the dispersed model couldn’t produce much more value. Our judgement call was that to grow we’d have to do something different, and get our factories operating more efficiently and effectively. We did a big process around lean manufacturing.”

On the business model side of things, this has meant restructuring into three core divisions – precision engineering (“making widgets”), critical engineering (“great big bits of kit”) and hydronic engineering (cooling systems) – and divesting two others. The company has also rebranded, bringing seven previously different business units under the IMI brand.

Rather appropriately HR itself has also been re-engineered, with a focus on three distinct areas: core processes, organisation design and “clarity”, and behaviours. Standardisation has been critical, as there were few common processes when Tranfield joined – he found more than 500 bonus schemes, 89 pension schemes and “hundreds” of different PMI policies for IMI’s 12,000-odd staff.

“The reality is, if you have 12,000 people and 500 bonus plans how does that tie into the overall strategy?” asks Tranfield. “It doesn’t. There has been a heavy process re-engineering piece and we’ve saved several million by being more efficient. That was an example for me where HR could make the company money. And by making things simpler, that discretionary effort that was spent on administration disappears and you get people concentrating on things that add value.”

The second leg of Tranfield’s “triangle” is around “organisational clarity”. “My test of what a good structure looks like is: could you explain how the organisation works in five minutes?” he says. When he joined IMI he says it would have taken “two or three hours”, so another piece of work has centred around simplifying organisation design and creating more “clarity in terms of how decisions are made”.

For Tranfield having that “line of sight” between job roles and the wider business objectives and strategy is central to engagement. “If people are clear about their role, what’s expected of them, and what good looks like, you have more chance of them being truly engaged,” he points out. “If you are not clear with them what good looks like in the context of their job, do not expect them to guess it. Get that clarity and people can concentrate not on what their job should be, but on doing it well.”

The final, stabilising, and essential piece of the triangle is the behaviours, branded under the ‘IMI Way’. Traditionally the code of conduct focused on compliance, but Tranfield was keen to broaden it out to “how we do everything” and make it “integral” to the whole business. The values and behaviours have been refreshed, adding ones that are relevant to the new model, such as collaboration. Rather than going for a hard launch, all bells and whistles, it’s more about making the behaviours central to all HR processes, says Tranfield, to make sure it isn’t “just a flash in the pan”.

One challenge has been translating the behaviours, and strategy more widely, across IMI’s many geographies. The balancing act is in “building great HR for the geographies you are in”. In less mature markets such as China, where HR has to deal with high turnover and intense competition for talent, making people feel part of a “global whole” is critical. “You constantly need this interplay between line and centre,” says Tranfield. “You have to talk to each other, work as one team. The natural behaviour should be to collaborate, not compete. One of the key HR competencies is being able to see the sensitivities and make that business decision between global and local.”

To build global capability and support a diversity strategy hooked on localisation, IMI has been steadily and heavily reducing expat numbers, removing about 50% of the expat budget. “The CEO and I do not believe [in relying on expats],” he explains. “I believe you transfer the skills and get the best people you can locally. I would define diversity in a company like this as being true to the markets in which you sell and operate. We need to be authentic to where we are.” He adds IMI has fewer than 50 expats, “probably one of the lowest in the sector”.

On skills more widely, despite the headlines around engineering skills shortages Tranfield says IMI isn’t struggling as much as you might imagine: “If you can get your act together HR-wise and be clear about what you’re offering then you can find the people.” However, an ageing workforce is driving a rethink around career paths, he adds. “The traditional career path doesn’t really work any more. [To tackle that] don’t let staff retire too early. We’ve retained people on coaching contracts so you don’t lose knowledge. A lot of people don’t want the grind of five days a week any more, but offer them two days coaching graduates and they love it.”

Tranfield has always worked in ‘tough’ industries, from oil and gas, to utilities, to engineering. As such, he says it was “beaten into [him] at an early age” that no-one will listen to HR unless you are “clear about what you do and how you contribute to the business generally”. Now, as part of the CEO, HRD, CFO triumvirate, he views the HRD role as a challenging yet rewarding balancing act.

“To be at your peak in your HR role you have to be an exec, and not just in HR,” he explains. “You have to be the one that’s interpersonally agile enough to make sure everything is working between the execs and the non-execs, the internal and external. In the HRD role you have that extra responsibility. You are the glue in the organisation. If there’s a dysfunctionality in the senior leadership team you need to be the one who’s aware of it.”

“The HR function will never have the obvious power position that the finance function has,” he adds. “But that doesn’t mean you can’t be incredibly impactful.” And with three-and-a-half more years of his self-imposed six-year timeline to go, I sense that much of Tranfield’s impact is still to come.