Richard Hytner: The HRD has the best role in the business 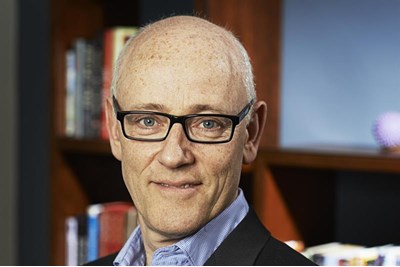 Richard Hytner explains why being an alpha in business isn't everything

It’s not often a discussion of leadership includes a baboon analogy, but go with it… A 2011 study of baboon social groups in Kenya discovered that the beta baboon (the number two in the troop) is significantly less stressed and has a higher quality of life than the alpha baboon. “I’ve opted to be a beta baboon in my professional life,” says Richard Hytner, adjunct professor of marketing at London Business School and former global deputy chairman at advertising giant Saatchi and Saatchi, who has just set up a creative management consultancy called, appropriately, Beta Baboon.

The concept of being happy as a ‘number two’ and “leading from the shadows” is the basis of Hytner’s book Consigliere, and is what he recently shared with an exclusive group of HRDs from HR magazine’s HR in the Boardroom programme. HR magazine caught up with Hytner afterwards to talk leadership, purpose and the joy of being second in command…

RH: We all have a choice about what kind of leader we wish to be, and in leadership – which is a collective endeavour – we need people to exercise two types of leadership muscles. One is the ‘A’ role, where they are ultimately accountable and make the final decision. That’s typically associated with being a CEO or team leader. The other is the understated leadership muscle of advice, support and council – the kind of role we associate with being a deputy. Typically there’s too much of a hierarchy.

HR: So do we all use one muscle more than the other?

RH: A complete leader is able to exercise both A and C muscles. We need to test both, but ultimately we are all more effective when we are happy, so be honest about which role brings greater contentment. In the end I found I was more effective in C mode than in A. I love being responsible for shaping, not taking, a decision.

HR: How does this affect how organisations consider leadership development?

RH: Society and business culture elevates the importance of being the out and out leader. We do need charismatic leaders who are willing to subject themselves to the scrutiny of the media and quarterly reports, but we make too much of it. Enlightened organisations are rebalancing their leadership. Board leadership should have a better balance of A and C. Organisations are still stuck in conventional thinking – testing someone in an A role by sending them off to run a remote market. Instead we should create more short, sharp bursts of development, a little like the military. Give someone the opportunity to be an A on one project and a C on another, offering multiple opportunities to test both styles of leadership.

HR: What qualities does a C bring to an A?

RH: When I asked leaders how they wanted to feel as the result of having great Cs around them, they wanted four main things. The first is they want someone to act as a liberator- to lift the weight of the world off their shoulders. The second thing is they like to feel enlightened; the good. As surround themselves with educators, people who bring them the latest thinking, serve up fresh ideas and give recommendations. Most importantly, they need people around them that anchor them and keep them authentic – people who are courageous enough to speak truth to power. And they need people who deliver and can make things happen. [Liberate, educate, anchor and deliver form the handy acronym LEAD.]

RH: I think the HRD potentially has the best role in the organisation. They are both an A, in that they are accountable for the people function, and a C to the CEO and their peers if they are very skilful around the boardroom table. That anchoring role is a huge skill – knowing when to break bad news and holding the mirror up. It’s a subtle art. It takes courage and you cannot be a popular anchor because you are dispensing tough stuff. It’s a critical role, and HR is the best place for it.

But Cs also need their own circle. As an HRD it’s important you have your own casting going on, and your own diverse circle of liberators, educators and so on.

HR: Although many HRDs find themselves playing a major C role with the CEO, people issues can still often slip down the management agenda. Why is that and what can be done?

RH: CEOs are conditioned, whether they like it or not, to answer to the markets and to spend more time with the CFO because they know embarrassment is one quarter away. Despite their great rhetoric and intent most CEOs do allow the people agenda to slip down the management board agenda. That’s at their peril, because the robust, resilient health of their organisation depends on their people. But the pressures of running quarter to quarter, and the cunning of some CFOs in pushing their agenda, means HR has a battle on its hands. HR directors have to demonstrate some fight and courage as the major C.

I don’t think [HR] will ever win the argument as a functional, rational debate of HR deserving a seat at the table. [HRDs] will need to win it, person by person, one boardroom at a time. The trends are in their favour – the uncertainty of the business environment for example. Any business that wants to make a sustained impact in the world will have to elevate the people agenda.

HR: In terms of making a positive impact on the world, what is HR’s role in creating purpose?

RH: Purpose is an aspiration that goes beyond any metric. It’s who you are as an organisation and what really drives your culture. Businesses are struggling with lack of trust, and culture change needs to be built on what people care about, inside and outside the company, so where best to place the responsibility for driving purpose-inspired change than HR? It’s people who will make the change. People act on emotion and HR has a higher EI quotient than most. To get an entire organisation behind purpose you have to make sure purpose drives all the key decisions and allocation of resources. HR has the opportunity to make sure purpose never slips off the agenda.

HR: When you talk about bringing insights from internal and external people together, does that mean a closer working relationship between HR and marketing?

RH: Today there’s nothing that stands between the brand as seen externally and the business internally. HR should take command of insights – all too often its left in the hands of marketing, who only think about the external. But great change comes from the inside out. While marketers can use their creativity to get messages out, nothing will change unless behaviour inside changes, and that is the domain of the HRD. It needs both EQ and real, hard delivery, and I’m not sure most marketers have the stomach for that kind of marathon.

HR: As well as subsuming marketing, how would you like to see the HR function develop?

RH: HR needs to evolve. The model has to be to reduce and eliminate the things that are not adding huge value. HR should be finding imaginative ways to get that work done, either elsewhere within the company or outsourced, in order to free up the resources, time and space to focus on what adds value: purpose, culture change, transformation, and leadership effectiveness. HR needs to liberate itself to spend time on that. HR has to develop more of an appetite to play more clearly in a position as first among equals.

HR: Would you like to see more HRDs taking on the CEO role?

RH: Yes. The HRD should be the prime candidate for CEO – but only if they want it. There’s not enough internal succession planning, and [CEOs] aren’t coming from a diverse enough pool. HR should be the natural space for a CEO to source a successor as those C qualities of influence, inspiration and thoughtfulness should be much more prominent in the ultimate leader. Cs can derive a great deal of contentment leading from the shadows, as opposed to being the alpha baboon in the limelight, but if the HRD wants to be the CEO they should be knocking on that door.

HR in the Boardroom is HR magazine’s high level, innovative and exclusive development programme specifically designed for HR directors who seek to have greater impact and deliver greater value to their board, CEO and chairman. It includes 1:1 coaching from our executive coaches and peer-based support and networking opportunities, with guest speakers. HR magazine is now recruiting for cohort 4, starting in January 2017. Places are strictly limited. Please contact Sian Harrington on sian.harrington@markallengroup.com