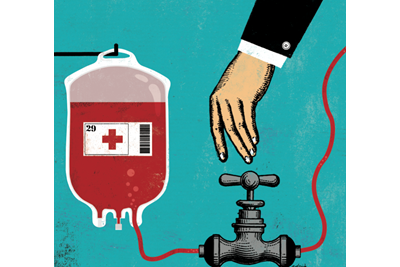 Yes, Pressure cause a lot of problems. As for me, I'm an example that my hyperthyroidism desease is caused by pressure. When I was in high school, there is a Gao Kao examination in the 3rd year of ...

More than 90% of HRDs believe employees’ ability to cope with change and uncertainty will determine their likelihood of being hired in five year’s time, according to a survey.

The results showed 79% of line managers and 75% of HR decision-makers thought employee wellness would be formally measured and reported by 2018.

However, 72% of line managers admitted their organisation could do more to support employees through persistently stressful periods.

“As a result of 2008, in almost all workplaces, whether in the public or private sector, there are fewer people,” Cooper said. “Those fewer people are doing more work and working harder, and most organisations are too lean and too mean.

“Whereas before the crash we were probably a bit fatter, and could tolerate people burning out or leaving, now what I’m hearing HRDs talk about is that they cannot cope with regrettable turnover – they cannot afford to lose some key people.

Cooper added: “The way we think we can keep them now is by making them more resilient and creating an environment that’s into wellbeing. Whether it’s flexible working or better management of people - whatever it is, we really have to retain people.

“This has become more of a bottom-line issue – it’s a retention issue and an attraction issue. But retention is key. We have to manage people by praise and reward, not by fault-finding.”

The survey highlighted flexibility as a key feature of future workers. Among HR decision makers, 79% expected employees to have multiple simultaneous careers by 2018, and 60% thought workers will be hired on temporary contracts or working as contractors or freelancers.

Almost all respondees (92%) thought older workers would opt to work part-time rather than retire.

Right Management UK & Ireland general manager Ian Symes said the results suggested employers needed to “put people at the heart of their plans and provide their employees with the support, structures and vision they need to cope in an ever-changing environment”.

“Organisations need to strategically plan their workforce and look at the systems they have in place to support employees and the business through turbulent times,” Symes said.

“Without this, they will always be reacting to what is happening rather than being in control. This will only add to the stress and exhaustion that many staff are feeling so it’s important that businesses look at ways to boost the resilience of their organisation and their people. Planning ahead and being flexible are central to making this a reality.”

According to the a report published by the Health and Safety Executive last year, 40% of all work-related illnesses were causes by stress in 2011/12.

Yes, Pressure cause a lot of problems. As for me, I'm an example that my hyperthyroidism desease is caused by pressure. When I was in high school, there is a Gao Kao examination in the 3rd year of high school. I felt too much pressure and didn't find a psychological counseling to help. Although my mom asked me to go but I ignore it. During a one year high pressure study I felt tired, so did my body. There are 3 billion people took this Gao Kao examination in our province and there are only 300 thousand people can go to a good university. I was checked to be a hyperthyroidism patient because one day I emesis crazily in my home and my pulse raise to 120 times a second. But luckily I came to the doctor and psychologist and learnt how to release pressure. My life is getting better now.