Protecting people's futures at the PPF 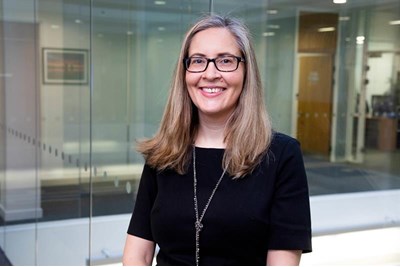 Over the years the Pension Protection Fund’s CPO has increased the reputation and influence of HR, enabling it to introduce key initiatives that benefit the business and the wider local community

People don’t generally give a second thought to the gradual build up of their pensions. Always growing in the background, they promise the dream of a Caribbean cruise and the chance to adopt a hard-earned pipe and slippers lifestyle. But in the event of company insolvency all that can change in a minute.

“Everybody that works here works here because of the mission of the organisation,” says Katherine Easter, chief people officer of the Pension Protection Fund (PPF). “Protecting people’s futures and putting the member at the heart of everything we do.”

Founded in 2005 in response to new government legislation, the PPF offers employees a lifeline when their pensions have been liquidated. Its core values – integrity, collaboration, accountability, respect and excellence – run through the organisation.

“The good thing is that the values are a really key part of our business,” says Easter. “Lots of organisations talk about what their values are, but you don’t get the sense that people could recite them. In this organisation they’re really embedded.”

Each value is consistently reinforced throughout the PPF’s people management strategy and messaging, from recruitment through to retirement.

They have also been critical to implementing culture change at the company, for example helping influence D&I initiatives.

Tapping into accountability, Easter remarks at how measuring the pay gap in the organisation has helped to pull focus on disparities.

With herself and two other women on the executive committee, Easter felt that the board was well represented from a gender perspective. However, she realised that “it didn’t necessarily translate down to the gender pay gap.” This challenged the company “to put more action” behind it.

Through analysis of company data, and “a focus on recruiting people into difficult-to-recruit areas like investment risk technology and senior management roles,” Easter says that the PPF has been able to reduce its gender pay gap year on year and is planning to share this publicly later this year.

Following positive steps with the gender pay gap, Easter is now focusing on ethnicity. “Being based in Croydon, it’s a very ethnically diverse area, I think it’s really important to be reflecting the community that we are part of,” she says.

The population of staff at the PPF that identify as non-white is around 24% and, as is often sadly the case, “that tails off the more senior that you go”.

In response the decision was made to independently audit the company’s hiring process to assess if there were any barriers to starting a PPF career.

“While, by and large, we were doing everything that we should be doing,” Easter says, “there were some interesting observations that led us to do a short online training programme before people are shortlisted and before people undertake interviewing.”

By reminding staff of the importance of ethnic diversity, this training is useful for helping to positively drive a culture change.

In January this year the PPF also signed Business in the Community’s Race at Work Charter, and Easter has established a reverse mentoring relationship with a member of the project management team.

Through reverse mentoring Easter gains insight into the impact of HR’s D&I initiatives. In one example feedback indicated that people were asking to see where the action was with regard to more ethnic diversity.

“In response to that we’ve matched each of our executive committee members with someone from the Race Action Group so we can ensure all of the leadership team have insight into what action needs to happen,” Easter says.

Engaging with the community

To directly give back to the community the PPF has designed a course in pensions administration especially for Croydon College.

“That means we make a real difference to recruiting people in the community and putting them through that qualification. It’s something I’m really proud of, and Croydon College nominated us for an award that we won as a result of that partnership.”

Wise to the fact that initiatives only go so far when challenging inequality, Easter is aware of the entrenched behaviours that are barriers to change.

“It can be hard for people to understand that there are invisible barriers to people progressing because they think ‘I would never behave in a way that would inhibit anybody’s progression’. And yet something must be going on for us to not see people moving through the organisation.”

Going forward, she adds, “what we need to do is scratch the surface and think about things like privilege that people don’t always understand.”

A steady presence at the PPF for nearing 10 years, Easter has steered the company through its transformation from a “public sector start-up” to the established corporation it is today.

As of February it handles more than 1,000 liquidated company pension schemes. Woolworths, BHS and Toys ‘R’ Us are some of the most notable brands transferred to the PPF’s books, each bringing with them intense scrutiny from the public.

“When I joined the PPF it still had a lot of its people coming out of the Civil Service,” Easter explains. “Some of them are still here now, and they’re very connected to the thing that they’ve built. But it’s changed significantly over the time that it’s been in existence.”

Reflecting on when she joined Easter says: “I remember the finance director at the time saying to me ‘HR is kind of like an administrative function, isn’t it? One that doesn’t do admin very well’.”

She adds that the PPF’s HR “wasn’t where I thought it needed to be as a platform for culture change. And if you’re wanting to influence people to change you have to be getting the basics right.”

To ‘get the basics right’ at the PPF the first challenge was to increase respect for and the reputation of the HR department. “Mostly this was listening more to people,” Easter says of her strategy at the time.

She adds that listening was critical to understanding their challenges and “how they wanted to solve problems and responding with pragmatic solutions.”

It took a few years, but when Easter came to take maternity leave to have her first son the department was at a crossroads.

She says: “People were much more confident in the advice they were receiving. We got the right letter to the right people at the right time, that kind of thing. But the thing that I wasn’t definite about was how much was there an appetite for culture change.”

On her return Easter was promoted to director of HR, OD and communications. With this new role she was given the opportunity to guide the dialogue surrounding the PPF at a point in its history that would be critical to its culture, the people it supports and its employees.

At the time the fund was handling the restructure of UK Coal, the UK’s largest coal mining business. Transferred to the Fund following administration in 2012, UK Coal’s deal triggered one of the PPF’s largest financial losses.

Around six months after Easter’s promotion BHS also went into administration and was taken on as an account. Both of these cases, and more high-profile rescues from the Fund, rapidly transformed the PPF’s media presence.

“It was a real step change for the organisation in terms of the position we were in the public consciousness,” Easter says.

As the PPF’s whole purpose is to hold steady in the middle of an administrative storm, the organisation did not share the same concerns as the companies it was taking under its wing.

“Although they [high-profile cases] have been challenging in so much as going from nobody knowing what your organisation does to being in every newspaper publication,” Easter says, “it was a challenging time with respect to how the comms team at that time were resourced and how the board understood how people talked about us.

“The rhetoric around the PPF started to change from ‘thank goodness it’s there’ to ‘but what about x? And what about y and what about z?’ And that was difficult for people internally,” she says.

“One of challenges was how do you maintain your employer brand inside when it’s being challenged from the outside?”

Thanks to her cross-disciplinary role in HR and comms Easter was able to control the internal conversation about the PPF.

“Because I did have the HR piece and the comms piece I could be really clear on what we should be saying to our employees about the role we were playing – that we were doing the right thing, and that we were putting the member at the heart in the various negotiations that we had to have to make sure that other people did the right thing.”

Culture change is now one of Easter’s areas of expertise. Prior to the PPF Easter worked at engineering consultancy firm Mouchel (now part of WSP Global) during its merger with Parkman. As part of the acquisitions team Easter says this role ‘brought to life’ for her how important people are in creating or reducing value in an organisation.

“When you buy a company,” she says, essentially “you buy it for the people in it, and so it’s really important you keep the people that you’ve paid for.”

The consideration there for Easter was of growth and reduction, and of how to integrate acquired talent within a big organisation – a contrast to the smaller consultancy businesses people had previously been a part of.

Working on the company’s Thames Water contracts Easter says: “It was an interesting group of people that I had at Mouchel because we had what we’d call blue-collar workers and then, at the other end of the spectrum, you’d have some of the country’s specialists in things like geotechnical engineering or somebody who’s an expert in Japanese knotweed and how it affects sites that needed to be reclaimed for building.”

At the end of her time at Mouchel Easter and her colleagues proposed a management buyout for their segment of the business. Though the deal was ultimately rejected on a cost basis, Easter still learnt a valuable lesson.

“That was an interesting process to go through in itself; thinking about what would we need to carve out a business? How would that look?”

In order to stay agile when it comes to future strategy Easter makes sure to challenge herself on what might be deemed “too accommodating” when it comes to people’s preferences or change and surrounds herself with a strong team who bring different perspectives to the table.

Having gained a great deal of influence at the company, for around six years Easter has been a consistent presence at board meetings. Influencing company culture from the top down, she brings with her a fundamental understanding of the people that work for the PPF, their needs, and the challenges they have overcome in the past.