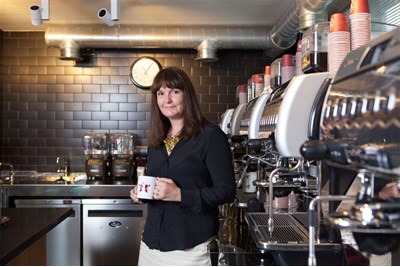 As Pret a Manger expands its global reach, the focus is on building and maintaining a happy workforce

Andrea Wareham clearly remembers the moment she decided she wanted to work at Pret a Manger. While working in HR at consultancy Arthur Anderson, she used to go to her nearest Pret every morning for a cup of tea and a pretzel. Then one morning, she placed her order, looked in her handbag, and realised she’d forgotten her wallet.

“The manager said: ‘Don’t worry, it’s on us’, and he did it quickly and without embarrassing me,” she recalls. “He made me feel so much better.”

Shortly afterwards, Wareham went for an interview at Pret. And 14-and-a-half years ago she joined the food-on-the-go retailer as HR manager. Today, she is group people director. She has seen the chain grow from about 70 shops in the UK, to over 360 outlets in the UK, US, Hong Kong, Paris and Shanghai. “It was very exciting to be part of something that was being created,” she says. “We needed to put in place guidelines, processes and people standards. We had the most amazing culture, but needed to structure it as we grew.”

That structure has become particularly important as Pret’s overseas presence has expanded. It’s no surprise to hear that “international ways of working” have been a huge focus for Wareham and her people team over the past year.

“We realised about a year ago that our model might not be the best for growth,” she explains. “Every country was self-sufficient, but had its own support centres. The problem with that is you get duplication and can lose brand consistency. It’s also very costly to have head offices in every country.”

After review, it was decided that the support centre in London would become the “mothership”, with localised support in each country. As a result, London-based roles “suddenly grew enormously” and became international, says Wareham. “People became responsible for toolkits, processes and ways of working in different countries, and had to understand [new] markets. The local markets had to accept that. It was a big change and not something you create overnight. To do this properly across time zones we needed to become more tech-savvy and get a lot better at project management.”

She adds that behind the scenes in every Pret shop you’ll find a “breathtaking” level of standards and rigour. “Spend a day in a shop and you’ll be blown away by the level of detail in how every sandwich is made; how the red peppers are washed, how the cucumbers are sliced,” she says. “But around that rigour, people can be entrepreneurial in the way they execute.”

Just like making a sandwich, training, management style and recruitment processes are standardised across the world. “We make sure we put those things in place from day one, even though it requires extra investment,” says Wareham. “Put those in place and we know the culture will grow.” This rigour is certainly paying off: sales were expected to rise by 17% in 2014.

Pret famously recruits for behaviours, “personality rather than skills” as Wareham puts it, and these, she adds, are “relevant in every market”. Candidates are assessed against three behaviours: passion, clear talking and team working. Whether someone has ever worked a day in retail before is unimportant. The team in every shop recruits its own members, with each candidate spending ‘experience days’ in a store and the team members voting on whether they are hired. “The team own their new starters, which is very powerful,” says Wareham.

Managers are told to focus on “family trees” – having the right people in the right place – rather than growing sales and profitability. Wareham says she “obsesses” over how long it takes to fill vacancies, and the aim is to fill every one within three days (for which Pret has an 80% success rate). “We are constantly keeping an eye on family trees and strengthening them,” she adds. “[Sales and profitability] will come if you get the right team in place. Lack of resource is not an excuse to slow down strategy. It’s not about having bums on seats, it’s about having the right people in place who are learning, growing and happy.”

Happiness is critical to Pret’s service style, and so investment in culture is massively important. “Often companies will spend 7% of their turnover on marketing,” says Wareham. “We don’t do marketing outside the shops; we spend that on culture instead.” That means investing in parties, giving each shop a budget for staff trips and offering “a huge number of different rewards”. Go up a level on the career ladder, for example, and receive £200 of ‘shooting stars’ vouchers. These vouchers aren’t for you to spend, however, you give them to those you feel helped most in your training.

As Pret recruits for personality, staff are encouraged to be natural while serving, rather than following strict customer service rules. Once a week, every shop worldwide is visited by a mystery shopper, who scores the team on 10 areas. If the shop gets over 90%, staff receive an extra £1 an hour for the week. Wareham says that over 85% of the time, that’s the case. “It’s a bonus we absolutely want to pay,” she says. “Team members know what’s going to earn them that extra money so they focus on those things. It’s natural, not forced, service.”

Pret’s success in this area hasn’t come without some backlash. In 2013, a Daily Mail article accused the chain of “emotional labour” for its focus on behaviours. “When I read that, I thought: ‘Isn’t it sad they have to find a reason why people are happy?’” Wareham recalls. “We care passionately about our people, and if you treat people well, with great respect, then they are happy. You cannot force happiness. When I talk to team members about the difference between us and other companies, they often say they are treated well by their managers here. Typically in food retail, management style can be command and control, but at Pret it’s about engage and encourage.”

Pret has also been criticised in the past – possibly unfairly, as Wareham points out this is “an industry-wide issue” – for employing too many migrant workers. “I love that Pret is multicultural, as do the teams,” she says, adding that 106 nationalities currently work in its shops.

The chain is hiring about 100 frontline employees every week in the UK, but according to Wareham the issue is that few British people apply for these roles. “Not enough British people see it as an attractive option,” she explains.

She estimates one in 50 applicants is British (although Pret doesn’t ask for nationality at recruitment stage, so it’s hard to measure exactly). “We are trying to get the message out that it’s not just a ‘McJob’; you can have a career you can be proud of,” she adds.

In a bid to encourage more young Brits to consider careers in food retail, the company launched its School Leaver Programme two years ago. Young people join straight out of school and receive nationally recognised qualifications. “We know we’re good at training people, so school leavers were perfect for Pret,” says Wareham. “It’s about telling the story that you can join a company like Pret and have a great career. You can be a manager by age 21, responsible for every aspect of a million-pound business.”

The programme has also led to an unexpected but hugely valuable off-shoot. Like most other businesses, Pret offers far fewer Saturday jobs than it used to, due to the availability of more flexible labour. “We thought, if we want to help British young people, the thing to do is give them weekend work,” says Wareham. “Schools were often asking for a week’s work experience, but what do you really get out of one week? If someone works every Saturday or Sunday, they are part of a team, learning great skills.” As a result, since September 2013 Pret has created 105 weekend jobs for British young people.

At Pret’s support centre in Victoria, London, the people team is the largest – bigger than finance, food, IT or property. It’s also the area the company invests the most in, says Wareham. “The people team here are the glue that holds the place together,” she says. The biggest topic in senior management meetings is how people are feeling in the shops, she adds, “which means I always have the biggest to-do list”.

As Pret’s overseas growth plans continue apace, that to-do list isn’t likely to get any shorter. Lucky, then, that Wareham genuinely feels she has “the best job in the world”.