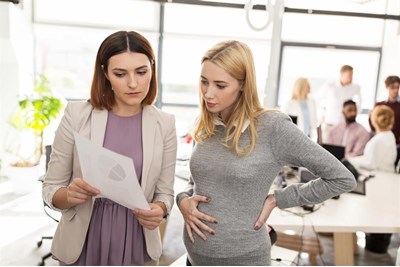 Its research, conducted by YouGov on behalf of the Equality and Human Rights Commission (EHRC), sought to understand managers' attitudes towards pregnancy and maternity discrimination.

It found that a third (30%) of employers believe that pregnant women and new mothers are ‘generally less interested in career progression’ compared to other employees.

The survey of 1,106 senior decision-makers revealed that 40% of employers claim they have seen at least one pregnant woman in their workplace ‘take advantage of their pregnancy’. A third (36%) of private sector employers also agreed that it is reasonable to ask women about their future plans to have children during the recruitment process.

A further 59% agreed that women should have to disclose whether they are pregnant in the interview process, and 46% said it is reasonable to ask a woman if she has young children.

Meanwhile, 44% of employers were found to believe that women should have to work for an organisation for at least a year before deciding to have children. The same number agreed that women who have more than one pregnancy while in the same job could be a ‘burden’ to their team.

Rebecca Hilsenrath, chief executive of the EHRC, said: “It is a depressing reality that, when it comes to the rights of pregnant woman and new mothers in the workplace, we are still living in the Dark Ages. We should all know very well that it is against the law not to appoint a woman because she is pregnant or might become pregnant. Yet we also know women routinely get asked questions around family planning in interviews.

“It’s clear that many employers need more support to better understand the basics of discrimination law and the rights of pregnant women and new mothers.”

While the report highlighted a perception issue, it also found that employers are struggling to provide pregnant women and mothers with the support they need.

Around 36% of employers disagreed that it is easy to protect pregnant women and mothers from discrimination in the workplace, with 51% agreeing that there is sometimes resentment among employees towards this section of the workforce.

Ben Willmott, head of public policy at the CIPD, said: “Discrimination not only disadvantages individuals, but also means that employers themselves are missing out on attracting and retaining female talent.

“Much more needs to be done to help organisations improve their people management practices, particularly smaller firms given the most negative attitudes to pregnancy and maternity in the survey are among those with 250 or fewer employees. Investment in manager capability is essential to challenge unlawful, short-sighted and unethical practice.”

"Sadly these findings are far from surprising," commented Sarah Jackson, CEO of Working Families. "We hear from women experiencing this type of discrimination every single day that our helpline is open."

“A key barrier to progress on pregnancy and maternity discrimination is the shortage of jobs advertised with part-time or flexible hours," she added. "Making all jobs in the UK flexible as the norm rather than the exception, as the prime minister has suggested, would help stamp out the discrimination endemic in the recruitment process, which these findings highlight.”

The EHRC called for employers to join the Working Forward initiative, designed to help businesses implement best practice and to improve workplaces for pregnant women and new parents. Its current members include Nationwide, Royal Mail, and Transport for London.