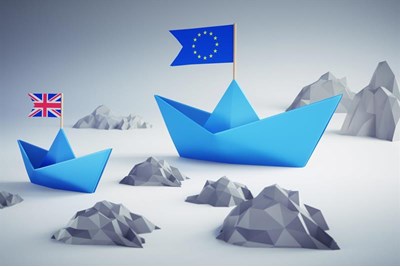 With just two weeks until the UK is set to leave the EU and another rejection of the PM's withdrawal deal, research suggests Britain's jobs boom could be ending

The business and financial sector, which employs six million people in the UK, could be hit by significant redundancies towards the end of this year, research from ManpowerGroup has warned.

Its Employment Outlook Survey for the second quarter of 2019 found that the national outlook has fallen to +4%, on par with the weakest levels of confidence seen in recent years.

The report comes as prime minister Theresa May was defeated on her amended Brexit deal by 149 votes last night. MPs will vote later on whether to block the UK from leaving the EU without a deal on 29 March. The no-deal debate will begin after chancellor Philip Hammond's Spring Statement economic update. If no-deal is rejected, MPs will vote on Thursday on delaying Brexit by extending Article 50.

A separate report by Quinyx presents a similar outlook to the ManpowerGroup report, predicting that the UK could lose 18% of its manual and elementary service workers (those who work in trade, agriculture, admin and service roles) as a result of Brexit. Despite this, 28% of businesses have no plan for managing the future pipeline of these workers post-Brexit.

Nearly half (49%) of UK employers currently struggle to recruit these workers, with the same percentage reporting that they struggle to retain them, the research found. The main barriers to the recruitment and retention of these workers in the UK are low pay (cited by 33% of employers), unsociable hours (25%) and lack of career progression (22%). Lack of flexibility was cited by a fifth (19%).

Patrick van der Mijl, co-founder and chief product officer at Speakap, said that businesses must communicate better with their staff as job cuts loom. “What I’m most concerned about is how communicative these UK businesses will be to their employees about the potential job cuts, if their specific positions will be eliminated as a result or if they will be moved to other branches or departments, and if they will be given severance pay, not to mention the mountains of paperwork they will likely have to fill out as a result," he said.

He warned that businesses that are slow to respond risk panicking employees. “If these UK businesses aren’t proactive, targeted and personal in how they communicate about the job cuts with their employees it could lead to even more confusion, frustration and panic," he said.

"Whether or not the employees are moved to another branch or department, no company wants to leave a sour taste in an employee’s mouth about the employee experience. And being too slow to communicate the news, or not providing relevant information to the affected employees in a timely manner, could do just that."


Van der Mijl went on to provide a number of suggestions for HR on how they can communicate restructures to staff.

“First things first, these businesses should send a targeted message to each group of employees that will be made redundant. This communication shouldn’t be a massive spam-like email. It should be direct and personalised to those specific employees and it should include the following information – what details they need to know, what actions they need to take (before, during and after their jobs are cut), who they should speak with, what paperwork they may need to fill out, among other things," he said.

"Additionally, this is a great opportunity for these companies’ HR teams to post and share interactive learning and development content on their employee communications platform so that the affected employees can gain new relevant skills to help them as they re-enter the job market.”

The Manpower Group Employment Outlook Survey for the second quarter of 2019 was conducted by interviewing a representative sample of 2,124 employers in the UK. Economic analysis was conducted by Development Economics on behalf of Quinyx, using Office for National Statistics data.