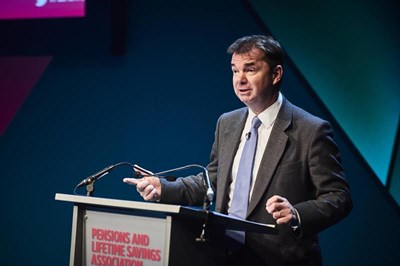 Guy Opperman shared his vision for pensions including mid-life MOTs, the launch of the new Simpler Annual Statement, and responsible investments

“Engaging people in pensions savings is a shared responsibility – not just the government, but the industry and employers all have a role to play collectively,” said Guy Opperman, minister for pensions and financial inclusion in the Department for Work and Pensions (DWP). “We need to work together.”

On day two of the PLSA Annual Conference and Exhibition 2018, Opperman outlined what the DWP is working on to engage savers with pensions: including expansion of auto-enrolment minimum contributions, a defined benefits (DB) whitepaper and defined contribution (DC) consultation, the creation of a single financial guidance body, and work on the pensions dashboard.

Citing his aim to deliver a pensions bill in 2019, he said he was “trying to kick as many consultations out of the door” so that he “gets the ducks in a row for legislation”.

Opperman outlined his vision for pensions in the UK:

Opperman championed the rollout of mid-life MOTs so that staff have greater awareness of their financial health, and said this is something the whole pensions industry should get behind.

“The reality of the situation is that we all receive intervention on our health in stages of our lives,” he said, pointing to the preventative health checks people receive as they near retirement age. “But we don’t do this in finance.”

Opperman called for a “sea change” with “proper intervention” so that people are engaged earlier with their long-term finances and future retirement income.

While some employers think this is something “HR wants the business to do… as it’s good for employee management but has no commercial benefit”, he said they “could not be more wrong”. Instead this can also help employers retain older employees, he said.

Plans to launch legislation for collective defined contribution (CDC) schemes are also progressing, Opperman said, explaining that “we are very close to announcing a consultation on CDCs”.

“We’re working hard to make sure we have a legislative framework on the schemes as [they] must work for employers and members – as well as the rest of the system,” he said.

CDCs, also known as a type of defined ambition scheme, differ to DB schemes in that members are not promised a set amount but instead have an ‘ambition’ amount that will be paid out, dependent on circumstances such as adverse economic conditions. They also differ to DC schemes as they pay out a regular retirement income from the collective fund.

Opperman tried to assure the audience that the government is making progress on the pensions dashboard, but admitted it “has taken longer than I’d like”. He didn’t provide a timeframe for the launch.

When it does materialise it will be “game-changing” for the pensions space, he said, but the industry “shouldn’t underestimate its size and complexity”.

He called on the industry to not wait until the dashboard is in place, but to go “in the direction of travel”.

“People want technology readily available so that they can see it straight away on their phones and that is the direction of travel for the customer,” he said.

Opperman went on to talk about the rise of financial inclusion, how it links to pensions, and the key role technology will play in engaging people in saving.

“Customers want all the information in a mobile- or laptop-friendly form. Fintech is transforming banking and savings and, in my view, pensions will be next,” Opperman said, referring to the fact people engage with their banks via their phones rather than visiting a bank manager. He called on the audience to ask themselves: “What are you all doing to enhance financial inclusion among your own staff?”

The conference also saw the launch of the Simpler Annual Statement, described by Opperman as “utterly key”. The statement, developed by an industry group including chair of the Tesco Pension Trustees Ruston Smith, in response to the government’s 2017 Automatic Enrolment Review, has been designed as a best practice example of an annual pensions statement, that cuts through the complexity and provides simple, clear, personalised and consistent information to help people engage with their savings.

Speaking on a panel about saver engagement with Opperman, Smith spoke of the importance of keeping it “as simple as possible”.

With people expected to have 11 jobs in their lifetime, they will have lots of different pensions and “they all look different”, he explained. “So even if someone is engaged (with their pension) they’ll find it difficult [to understand], so consistency is key.”

“The starting point is basic: how much have I paid in, what have I got today and what might that look like when I get to retirement?” said Smith, adding that it’s important to give information only on the “stuff that matters most and helps members engage”.

The statement can be provided online or on paper, and for employed and self-employed people.

Opperman pointed to new opportunities to engage and interest a new population of savers. “Investing for social and climate change issues is something we should be passionate about,” he said.

Opperman called on schemes to look at how they can remove barriers so that people can invest in funds that do “what they want to happen in the world”. The Treasury is working on radical proposals around how to make it easier to invest in the likes of UK infrastructure, he said.

“By investing in UK infrastructure, or climate change, or things people are passionate about, this will make a difference,” he said. “If we wish to engage savers and differentiate schemes from each other then that’s the hook.”

However, Opperman said environmental, social and governance criteria shouldn’t be included on the Simpler Annual Statement as it should be “kept simple”.