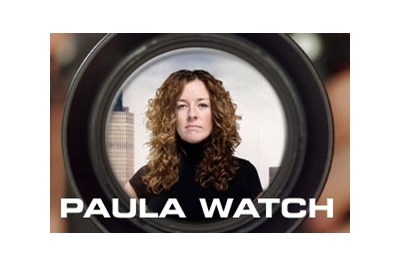 The HR community has woken up to a dark day as HR manager Paula Jones was mercilessly fired last night by Sir Alan Sugar on the BBC's The Apprentice.

Paula was plucked from the shadows of her previous performances by Sir Alan to lead her team, Empire, in the beauty and body care task.

Coming from a local council HR role in her home town of Walsall in the West Midlands, Paula claimed: "People from the public sector often don't get the respect they deserve but there is absolutely no reason why I can't stand shoulder to shoulder with anyone else from the business world."

Paula took charge right from the beginning coming up with the name of the product (Rock Poole) and after dispatching three of her minions to gather seaweed from rock pools (in Poole) to make soap, she and Yasmina set to the task of sniffing perfumes to mix into the soap ("This one smells like Tequila and dog").

Unfortunately, it was at this early stage our girl made the teeny, tiny, barely noticeable oversight of confusing cedarwood oil (costing £26 per kilogram) with sandalwood oil (coming in at £1,200 per kilogram). Whoops.

The girls poured generous amounts of the latter into their soapy concoction and Paula -  who had made it clear from the start she didn't know much about costs - estimated the production costs to be "about a fiver" when in fact she had incurred a spend of £700.

The product sell went well. At Portobello Road market Paula - decked out in designer sunglasses, motivating and encouraging her team throughout - flogged all her soap and even hiked up the prices due to demand, despite the fact the team had been giving a stall right next to a stinky, fast food van selling bratwurst. ("Sniff some shower gel to cover the smell of onions, anyone?")

But by this stage it was too late and the massive production costs incurred put the team into a deficit of £68 and they lost the task.

Paula and her team were dispatched to some greasy spoon to lick their wounds and apportion blame, while the other team and their ‘flukey' leader Nural were sent to a Japanese sushi bar to drink cocktails and contemplate who would get the ‘sake'.

But as the nation's HR professionals sat on the edges of their seats and Sir Alan's finger pointed towards Paula, and Ben ‘I got a scholarship to Sandhurst' Clarke prepared to "rip her to shreds", the age-old debate of the role of HR in the workplace came into play.

"You made a fatal mistake. You're fired!"

A lesson to us all: Paula was up for the challenge: she created and designed a great product, she had a strategy and she motivated and engaged her team - great HR traits. But when it came to cost she took her eye off the ball and it led to her downfall.

Paula Jones was fired just as she was coming into her own. It seems she had more to give to the competition. She may have lost this battle, but she has proved to the business world HR can be a strategic business function and I doubt we have seen the last of HR's own Apprentice.