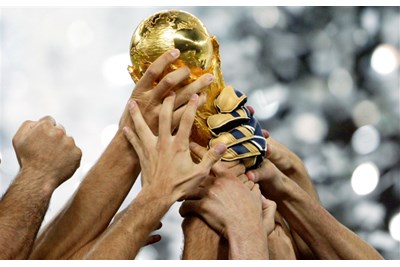 At HR magazine we don't really believe the economy will grind to a halt over the next month. But let's be honest, some people are going to go missing occasionally for previously unscheduled meetings.

Employment law specialist ELAS has surveyed 1,500 workers across the UK and found that 13% plan on pulling a sickie during the World Cup and 43% will take unauthorised time off to watch grown men chase a white ball.

“Taking an average wage of £13 per hour, the cost in terms of lost productivity from this time alone is well over £3 billion,” explained the firm’s head number cruncher Peter Mooney.

And even when people are at their desks, don't be fooled into thinking you have their full attention. An estimated 85% of employees admit they will likely spend an average of 20 minutes each day checking scores, as well as scouring social media for team news and updates on Wayne Rooney’s injury scares.

So what can be done to ensure your workforce is ‘match fit’ over this period?

David Fairs, partner in KPMG's people and change practice, advocates flexible working, but warns that clients will not be celebrating if staff come in late every morning. He says some "nifty footwork" could be necessary to keep both groups happy.

"Staff should be treated for what they are – responsible adults – and given the flexibility to watch games if they want to, but on the understanding that they would be expected to make up time lost as a result," he said.

"The simple fact is, of course, that if you don’t provide flexibility some people will find a way, anyway."

Gemma Reucroft, UK HR director of the Tunstall Group, supports England by default but will be cheering on Spain if (or once – Ed) the Three Lions bow out. She advocates applying a “dose of common sense”.

“My usual approach to these events is to use it as an opportunity to create some fun, engagement and light-heartedness in the organisation. We’re having a competition to see who can dress their office the best,” Reucroft told HR magazine.

“Our office is Spain because we have a Spanish intern, so we are hanging Spanish flags and bunting everywhere and will be offering Spanish food. We’re also having our own football tournament next week.”

When asked whether companies should consider introducing policies for large sports events, she said: “I would cry if we had to have one. It’s no different to anything else – it’s the same as managing a flexible working request or your social media policy.”

Reucroft warned that having an overly prescriptive approach to managing staff during the World Cup could result in an own goal if staff morale takes a Suarez-sized dive. However, for those who would like to know how to handle thorny situations without dishing out too many red cards, HR Legal Service has produced this useful guide.

Games to look out for

While we know that all employers trust their staff inherently, we thought we'd have a look at when HR teams might run into trouble across the next four weeks. Tonight the tournament kicks off with Brazil vs. Croatia. It's not the most mouthwatering fixture, but don't underestimate the effect of four years of pent-up anticipation on your most football-obsessed staff.

HR magazine predicts there may be a few sore heads adorned with faded Brazilian flag stick-ons, but there are likely to be more challenging days ahead.

Here are the fixtures you may want to look out for if you're thinking of booking crucial client meetings on a particular afternoon or the following morning.

England's first group match is conveniently placed late on the first Saturday night. While this may give emergency services and publicans a headache, HR teams should be relatively unaffected.

The first big game in or around office hours comes on Monday, as Cristiano Ronaldo's Portugal take on World Cup heavyweights Germany.

Both nations are football-mad and tipped to do well in the tournament. As people of all nationalities look to get good seats (or any seats for that matter) in the pub or living room of their choice, you might have a few mysterious off-site meetings crop up from around 2pm.

This being underwear model Christiano Ronaldo's first appearance, be prepared for a higher than usual proportion of your female staff to be attending such meetings.

Keep staff happy with: German beer, sausages and sauerkraut at a respectable time with the game running in the staff common area.

Avoid at all costs: Strategically placing life-sized posters of Ronaldo around the office.

The team with the worst nickname in world football (Socceroos – don’t ask) play their second group match against the mighty Holland next Wednesday. Dare I say it, employers in the hospitality sector may have something to worry about here. HR publications that happen to have Australian editors may also have cause for concern.

If you add to this football purists who still yearn for the glory days of Dutch 'total football', you could be a few light for this afternoon. Following this fixture is Spain vs Chile, so those with large Spanish workforces and 2010 glory hunters shouldn’t expect too much overtime.

Keep staff happy with: A BBQ, vegemite and avocado sarnies. Sangria is an optional extra that will keep your Spanish contingent happy (if the Aussies don’t get there first).

Avoid at all costs: Complacency. It’s sport, Australia are in it, you will need a Plan B.

England's second group match is on a relatively safe Thursday evening. If you believe the lifestyle publications that tell you Thursday is the new Friday, most of your workforce would be getting drunk anyway.

But England’s final game of the group is on Tuesday and could be an emotional affair. It’s simple, England will either qualify or not, but expect plenty of pints either way. Worst case scenario is if England pull off another Algeria-like bore draw (WC 2010, 0-0) – expect plenty of bleary-eyed, depressed workers the next morning (if they rock up at all).

Keep staff happy with: A moratorium on meetings before midday. Re-runs of The Verve’s Bitter Sweet Symphony if they qualify.

Avoid at all costs: Meetings before midday and re-runs of The Verve’s Bitter Sweet Symphony if they don’t qualify.

The group stages are anyone's guess. Assuming England make it through their group you may want to look out for the quarter and semi finals on 4 July and 8 July respectively.

Whatever happens, the final is a global event that demands everyone's attention. It's being held on Sunday 13 July at 8pm UK time. By this stage persistent offenders of absence will hopefully have gotten bored of football (unlikely) or been whipped into line (even more unlikely). However, the following Monday is certainly one to look out for.

If by some miracle England do make the final, our advice would just be to close the office the following day. Let's be honest, you probably won't be in yourself, at any rate. Good luck and enjoy.