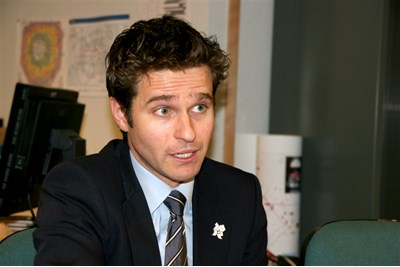 Does the following ring a bell? It’s 7:30am and your head is lodged in someone’s armpit, while someone else’s elbow is digging sharply into your back. You can’t move any of your limbs.

You're clinging onto the coffee the reason for buying which you can't remember, terrified it will spill. You arrive at work tired and stressed, ready to go straight back to bed, but you know full well that after you deal with meetings, emails and spreadsheets, you'll have to go through the commute all over again. And again. And again.

That's right, folks, it's the great British daily commute on public transport. The above example is based on a good day in London - one, that is, with no planned engineering work, leaves on the line, 'passenger action' or the dreaded signal failure.

The crowding on London's train and tube services has been a water cooler talking-point for years: there's an estimated seven million living in Greater London and approximately 300,000 employees travel to work in the City of London alone.

But with the Olympics looming - and an expected nine million more people ready to descend on the capital for 17 hotly-anticipated days in July and August - the capital's transport infrastructure is what could make or break the world's views of the London 2012 Olympics.

The London Chamber of Commerce and Industry estimates that for every day there is a tube strike in the capital, the economy has to fork out a stomach-churning £48 million in lost productivity - with staff unable to make it to work, hordes of confused tourists and the sheer influx of people convulsing the transport system and threatening to stop businesses in London and in the south-east functioning. Meanwhile, global investors look on aghast.

Much has been written and said about home working, remote working and flexible hours for employees, but this can't be an effective strategy for London's retailers, and with footfall in stores down over the Christmas period, employers in this sector - not to mention hospitality - will be keen to exploit the tourists for the event. But not if staff can't make it to work...

I went to meet the person with a lot of pressure on his shoulders: Mark Evers (pictured), director of Olympic Games transport at Transport For London (TfL). I have to concede, due to the efficiency of the tube service on that particular day, I arrived 15 minutes early. Friendly and unfazed when challenged about the threats listed above, Evers announces: "We are ready to put on a great games and keep London moving during the Olympics. Some 70% of traffic will be unaffected during the games and 65% of tube and DLR stations will operate normally - and that involves a huge network outside central London.

"We have known since November which stations will be affected at which times. These will mainly be Bank, Canary Wharf and London Bridge, which links to Greenwich [where equestrian events will be staged], Westminster and Stratford [where the Olympic Village is located]."

But Evers adds: "We are quite fortunate in that the vast majority of our upgrades are completed and we have a new infrastructure that has been changed to ensure businesses can operate and profit during the Games. We have invested heavily in transport, bringing forward our £6.5 billion-worth of improvements for London. We will increase capacity on the Jubilee Line by a third, up from 24 trains per hour to 30 trains. We have extended the Docklands Light Railway (DLR) line and increased the size of trains by 50% [three cars instead of two] and we have rebuilt Stratford regional station (pictured below) to accommodate the numbers travelling to the Olympic Village."

He explains about guides at stations helping commuters choose alternative routes and a large-scale advertising campaign for Londoners - which had already started as HR was going to press - to help them avoid delays and get to work.

I begin to wonder if Evers might have had to give this explanation more than a few times before, but underlying his words is the belief that it is not solely the responsibility of TfL to keep the workforce moving during the Olympic Games - the burden is shared with employers.

"We are providing detailed information for employers about the busiest days when they should think carefully about staff working from home," adds Evers. "There are going to be three million extra people every day making use of shops and we are talking to large businesses as well as suppliers and smaller restaurants about how to keep the delivery up. But we want to empower business to focus more on the upside: the Games are an enormous undertaking right in the centre of London. There are challenges, but this is a fantastic experience.

"Employers need to consider their annual leave policy, changing employees' hours and their own opening times and to be prepared to redeploy staff to other locations, if necessary. But I don't think it should just be the HR team managing this. It needs to draw in experts from other parts of the business, because this is a really big piece of work."

Evers' advice to employers is that they cannot expect, even in a best-case scenario, that it will be 'business as usual' during the games, and sounds a note of caution to prepare contingency plans as soon as possible. But he continuously reiterates he does not expect a massive impact on the majority of employees in central London.

He says: "Employers shouldn't underestimate how good the games can be. In my view, the best thing for employers is to have events in workplaces, get large screen TVs up and make the most of the big events for staff.

"There will be a different feel about London during those three weeks and the best way to keep business running is to make sure staff have a chance to enjoy the games in a controlled way and continue to be productive for the rest of the time."

So as Evers, like London, approaches a period that will be either his finest hour or a chaotic embarrassment, he remains - at least outwardly - confident his organisation and his systems won't let London down.

"We are on track," he says. "We have a lot more work to do, but we will keep London moving and ensure the situation is as good as it can be. It will make London a better place.

"It would be unrealistic to plan for no disruptions, but I want transport to be on the front page of the newspapers during the games for the right reasons. There is some really good work happening across the networks and we are prepared for that if a problem does arise.

"But I believe our legacy of improvements is what will be tangible and demonstrative."