OD must adapt to changing world of work 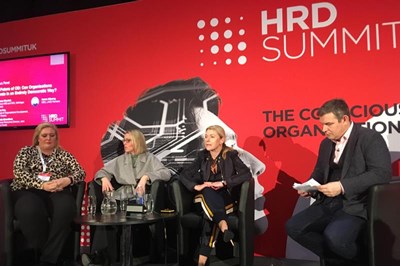 Organisational development (OD) needs to evolve to meet the demands of the future world of work, according to a panel on day one of the 2019 HRD Summit.

Speaking during a session called ‘The future of OD: Can organisations operate in an entirely democratic way?’, Lynne Weedall, group HRD at Selfridges Group, said that “organisational development takes many forms and many guises”.

“I think we’re entering into a really fascinating era and we might argue the digital world is full of digital dictators… and that’s shaping and changing the world we’re working in and turn[ing] on its head how we think about it and how we respond as an HR function, as an organisation and as a society overall,” she said.

Weedall explained how the retail industry – and the skills it now needs – has been significantly disrupted by digitalisation. Digital, engineering and software skills are particularly in demand, and “if we add the word 'agile' in then everyone is after those people”, she said.

Linda Mountford, northern Europe commercial HRD at Thai Union Group, agreed that “digitalisation” is having the biggest impact on the challenge of finding the skills needed in the future world of work. She said that the 'lifetime' of skills is now just two-and-a-half to five years, meaning it’s fundamental organisations become more agile.

The “whole world has changed” at KP Snacks, added head of OD Lisa Fox, giving the example of the production line where workers used to do the same job day in day out. “It’s no longer about that anymore but how can we get people to move the business forward,” she explained.

This digital shift is why Selfridges is focusing on reskilling and “turning old-fashioned policies on their heads”. “But probably the main thing I’ve noticed is the shift from talking of OD in terms of roles to designing things around tasks… and more task-related work patterns,” she said.

Such future shifts are driving the need for HR to explore new models of OD, the panel agreed.

At KP Snacks this has involved a shift to a lean manufacturing model and a focus on “almost self-managing teams that are very agile”. “From an OD perspective there is more structure than there used to be,” said Fox, adding that this helps the business “identify rising talent”.

Organisational development needs to be a continuous evolution, said Mountford, emphasising that “even if you do a fantastic job you can’t rest on your laurels for 12 months”. “I don’t think there’s a hard and fast rule or that you can put a date in the diary to look at organisation transformation but there are signals and prompts,” she continued. This means that it’s HR’s role to be “on the ground and understand the mood of the organisation”, Mountford added.

Yet when asked whether HR is prepared for the future changes it needs to make, Fox admitted that she “doesn’t know if you ever feel prepared”.

Weedall agreed that it’s a challenge: “We constantly hear in business that we need to be agile then we say to someone ‘we need you to move office’ and all hell will break loose. Some days we go into the organisation and things happen and it’s wonderful, like slicing through butter, and other days it’s so hard, there’s so much resistance. So you need to think: what’s getting in the way of the boat going faster,” she said.

The panel went on to discuss the idea that organisations should operate in more democratic ways.

For Mountford a democratic organisation is “a values-driven organisation”. She pointed to the fact that Millennials account for a growing proportion of the workforce so “from an HR perspective we need to look at our EVP, how we bring talent in, how they behave and if they have the cultural fit we need”. “All of that builds into democracy,” she said, adding that it’s important to not revert back to an autocratic relationship when things go wrong”.

This is where HR needs to play a critical role, she explained, by “having a clear strategy, vision and mission so people understand that their role in the organisation helps to make that democratic organisation more of a success”.

It’s not easy to be democratic though, conceded Fox, “but we have to start somewhere”. She recommended feedback loops so that “everyone can say what they feel will make the company better”.

But, according to Weedall, many leading organisations today aren’t following such a model. “When I look at the Mark Zuckerbergs and Jeff Bezos of the world I don’t think they’re particularly democratic,” she said.

While there are “many different models” businesses can choose to focus on, “there’s no doubt that getting people involved and feeling they have skin in the game for what they do… definitely works”, Weedall added. That said, it still “needs to be underpinned by clarity and direction”, she said.