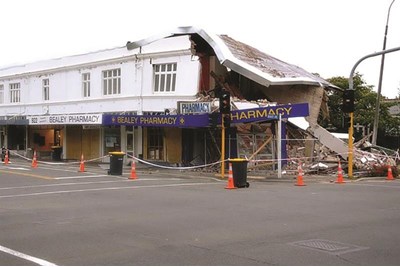 Out of such devastation, tragedy and adversity comes an inspiring collaboration within the community. Being aware of workers being emotionally strong, providing training and support has achieved ...

In February 2011 Christchurch in New Zealand was hit by a category 6.3 earthquake, which killed 185 people – 115 of whom died when the Canterbury TV building collapsed. As well as loss of life the earthquake saw widespread damage to other buildings, while railways, roads and other public utilities – including gas, electricity and water supplies – were also affected. The rebuild was so significant it was deemed too large for one single company to co-ordinate alone. So a virtual alliance company – SCIRT (Stronger Christchurch Infrastructure Rebuild Team) – was created, bringing together more than 2,500 staff from New Zealand’s five major civil engineering firms (Fulton Hogan, Downer, Fletcher, City Care, McConnell Dowell). For five years it reported to the Canterbury Earthquake Recovery Authority (CERA) and the Transport Authority (NZTA) before being disbanded.

A staggering 80% of Christchurch was damaged in the 2011 disaster – requiring some 700 separate projects to be co-ordinated – so the decision to create an alliance was a relatively easy one. However, because the entire Christchurch community had been affected to one degree or another, it was also apparent that the rebuild would take an emotional toll on workers involved.

“It was immediately clear that this scale of project required workers to be emotionally strong,” says Belinda de Zwart, former change leader, business systems at Fulton Hogan, who became SCIRT’s director of people and culture. “What was also apparent was that we would be bringing people together from organisations that would ordinarily be competing against each other.

“Trusting that they would all work together to meet common end goals couldn’t be left to chance, especially as there was a feeling that an elevated level of performance and capability would be needed – one that would hopefully create a legacy of new safety standards and processes just in case further earthquakes occurred.”

The answer, in partnership with North Canterbury Transport Infrastructure Rebuild learning and development coach Kathryn Jackson, was to create formal resilience coaching to equip staff with the emotional skills they would need. “Leadership clearly existed across all the companies, but it was clear not everyone was mentally equipped to lead the type of change that would be needed,” Jackson says. “The new organisation would also take people to a whole new area of ambiguity. There could be no place for plodders!”

Working with Resilient Organisations – a training offshoot of the University of Canterbury – the team decided an ‘adaptive resilience network’ would be most useful.

“Not in a ‘stiff upper-lip’ sort of way but to look at several key areas, including people understanding their own emotions, talking about their emotional state, and helping others,” says Jackson. “So-called ‘brain-based coaching’ was developed, which looked at how people’s brains work when they are put under pressure. Supplementary support was provided to help staff support each other.”

This included encouraging them to be more willing to ask and challenge people, especially those from different firms with different approaches.

“We had 220 leaders go through coaching workshops, with the motto being ‘our team’,” says de Zwart. In addition, wellness initiatives were expanded into the wider Christchurch community around the five ‘ways to wellbeing’ pillars of Give, Be Active, Keep Learning, Connect and Take Notice.

From October 2012 onwards SCIRT also took part in a Wellbeing Game (an online game developed by Healthy Christchurch and the Mental Health Foundation of New Zealand) that was rolled out in Christchurch. The game involved people accumulating ‘happiness’ in hourly slots by tracking the amount of time spent each day on activities that use the ‘ways to wellbeing’ principles. The idea was to make people more aware of what they already do, try new ways to increase wellbeing, and for workers to be champions of their own happiness.

A monthly forum was established where HR and related roles across SCIRT teams would share what they were doing around wellbeing. Wellness champions were also created to keep resilience messages constant. But the major result was enhanced worker resilience.

“Each month resilience and wellness was actually measured as a KPI, with distinctions made between whether projects had created ‘standard’, ‘stretch’ or ‘outstanding’ changes to people’s wellness levels,” says Jackson. “To reach outstanding all teams had to deliver one significant wellness initiative a month, and this was regularly being achieved.”

For this to be audited in the first place wellness champions created their own definition of a wellness initiative. This was: ‘significant ideas intended to assist employees in making voluntary lifestyle changes by providing them with the knowledge and skills to improve their own personal wellness so they feel more in control and in better health’.

Throughout the time SCIRT existed 152 such projects were created. Engagement and wellness was measured every six months and wellness scores of 76.2% were reached, while ‘alignment and team involvement’ scores hit 71% – even though teams knew they would soon be disbanded.

“While it wasn’t always easy, and there were some tense times, all leaders acknowledged the extra support they got was invaluable,” says de Zwart. “They all created ‘what we’re here for’ statements that they tell me they still use today. Such was the success of employee involvement it rubbed off on citizens too – with them giving the rebuild process an 86% satisfaction score – unheard of for major projects like this that cause mass public disruption.”

To an extent, we’re already seeing variations of this project in the UK. In December 2015 when Cumbria was hit by Storm Desmond (the biggest flood in its history, which saw 7,790 families evacuated and 2,000 businesses affected), the local council’s Infrastructure Recovery Programme appointed Mott MacDonald as not only lead contractor but manager of an entire supply chain of further sub-contractors. Its job included upskilling them to complete repairs (including 784 bridge repairs and 240 kilometres of road resurfacing). Construction News reported: ‘This collaboration and upskilling has enabled contractors to be equipped with the necessary skills to rebuild infrastructure should another major flood occur’.

Out of such devastation, tragedy and adversity comes an inspiring collaboration within the community. Being aware of workers being emotionally strong, providing training and support has achieved fantastic results. I love the five wellbeing pillars: of Give, Be Active, Keep Learning, Connect and Take Notice. Also to be able to know the progress of their resilience and wellness through measurement as a KPI will keep the engagement and continue their collaboration. Karen Waite