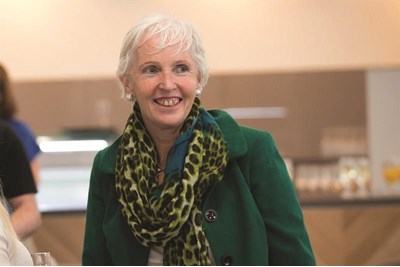 Helen McHale’s consistent support, openness and integrity meant she was awarded Most people-focused CEO at the HR Excellence Awards. But her employees have been there for her in return

In recent years housing has become one of the most pressing issues facing the UK. And Helen McHale, CEO of Stockport Homes, knows there is no way to sugar coat the challenges the sector faces. “We want to reduce inequality and we want to be different,” she says.

“For us it’s about assisting with policies that are progressive and helpful to the most vulnerable people in our society. At the same time, we know that we need to do what’s right for the organisation and we need to be entrepreneurial.”

When she started her career McHale’s priorities were to work in the public sector and to be within a reasonable distance of her hometown Manchester. That was 34 years ago. Since then she has had more than 10 jobs, working across five different local authorities.

McHale joined Stockport Homes in 2005, where she soon found that the right standards were not being met.

She says: “We weren’t able to deliver a high-quality service. And we had to look at becoming an ALMO (arm’s-length management organisation). We had tenants who really weren’t on board and staff who were demoralised. It was our lowest point.”

An ALMO is a not-for-profit company that provides housing services on behalf of a local authority. This means ownership and the terms of management are an agreement between the authority and the organisation.

But given ALMOs are not- for-profits and dependent on performance, there was concern that the change could lead to cuts in staff pay.

This situation led to the first of what have been many bold decisions from McHale, and it has clearly paid off. Fourteen years ago there were 225 staff and turnover stood at £10.85 million. Today there are 650 staff and turnover now stands at £45.59 million.

It also led to McHale winning our 2019 HR Excellence Award for Most people-focused CEO. If this wasn’t enough, just a few of the other awards the organisation has received include ASB Resolve Awards for Residents and Communities, the UK Employee Experience Award for Health and Wellbeing of People, and the Northern Housing Awards for Landlord of the Year and Partnering Scheme of the Year.

Rising to the challenge

The most important aspect of driving positive change was to lay out the facts and allow employees to help resolve organisational problems. “You have to challenge things that aren’t right in a constructive way. All you can ever do is be honest with people,” McHale explains.

She also feels that part of being a good leader is giving everyone a role to play in helping the organisation.

“When you get people to lead on different parts of the solution they really come together. You find that everyone is committed to doing their best, you celebrate your achievements, but you’re completely able to face up to things when they aren’t right too.”

The difficulties didn’t stop there, though. Regardless of how well the organisation was doing, its success would always be at the mercy of market conditions.

“Five years ago everyone was expecting rents to rise, and the government said rents would probably rise for the next 30 years. All of a sudden the government said that we had to put down rents by 1%. That means a significant loss of income,” she says.

Then there was austerity to contend with. In a similar situation many organisations would have opted for redundancies. But for McHale the answer was not to make further cuts and lose people.

In a message to the organisation she said: “We will not be making redundancies to our people. Instead, we will utilise their talent and passion to grow our way out of austerity, grow our streams and work together as one team to transform lives.”

So the organisation set up a trading company and had to employ people under different terms and conditions. Ultimately, it has led to a system that is both better quality and better value for money for the business.

Avoiding redundancies during austerity is just one example of how tough moments can create positive change, McHale says.

“When you’re thinking about innovation, challenge is part of that. It gives you that incentive to just get on with it, rather than batten down the hatches.”

Not all businesses are able or willing to prioritise their people when under pressure. However, McHale feels that the best innovators recognise the value of every one of their employees.

“Being innovative is absolutely our watchword, and we’ve been the first at so many things. Of course things go wrong and that’s what taking risks is all about. But if you really understand people, and can allow them to work together, that’s what will lead to real innovation.”

It is evident, however, that being compassionate is not just something McHale practises from a business perspective. It’s just who she is.

“I think I’ve always been quite forgiving and understanding. For me it’s about being able to see things from someone else’s point of view.

“If you make a mistake my job is to help put it right, to reflect on it, find out what was learnt from it and to put those steps in place. If you made a mistake but you tried your best no-one’s going to come and have a word with you, so long as you’re not being reckless or wilfully negligent.”

Above all, McHale makes sure her staff know that she is there for them. She has her lunch in the communal areas each day, personally delivers Christmas treats, and ensures every employee receives cake and a card on their birthday.

When HR magazine asks McHale how she manages both taking care of her own wellbeing and that of her staff, she admits that her priority is her employees.

As a result, her employees are there for her too. In early 2018 McHale tragically lost her son, before losing her older son four months later. She took little time off, instead preferring the structure and support of work. Following her losses, she sent a message to all staff to inform them of her loss and has openly shared her experiences with those who have asked.

For McHale openness is part of being a genuine leader. “I believe authenticity is the number one thing. So how could I sit there and have had such major traumatic things happen in my life, hide them from people, and expect to feel authentic?” she says.

“It could be easy to look at me and assume that I have it all. But I’ve got feet of clay. I gave people the chance to give something back to me, and it helped the relationship to feel far more equal.”

Around the time of McHale’s birthday, with her consent, employees organised a charity event. Photographs of her sons were put around the office, and staff raised £14,000 for MQ: Transforming Mental Health.

Employees also knew they could put their trust in McHale and began to share their personal stories of tragedy with her. “The best thing was people emailing me about their struggles,” she says.

“People told me that they had family members who were bipolar, and how difficult they had found it. Or another example was when an employee lost his fiancée and their unborn child. Our health and wellbeing experts put on talks about epilepsy after this. People really feel that their organisation is an accepting organisation.”

Throughout everything McHale believes recognising that there is strength in adversity can keep you going: “I always encourage my staff to enter awards, whatever the circumstances. I tell them we’ve had a difficult year, but we’re going to be the best employer regardless of the circumstances.

“Keep going, keep true, and don’t just back away when things get difficult. That will keep you in good stead in the long run.”

Entries are now open for the HR Excellence Awards 2020