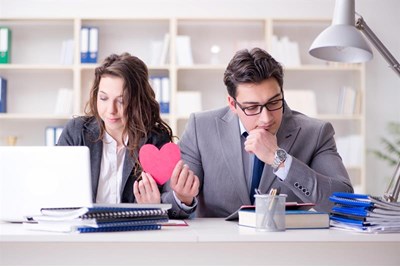 Nearly two-thirds (63%) of UK employees believe having a workplace romance shouldn’t be a sackable offence, according to a Perkbox survey

These respondents argued that employers shouldn’t have a say over employees’ personal lives and a workplace romance should be accepted if it is genuine.

The survey polled 1,000 UK employees and found that only 13% believe a work romance between employees at different levels should be a sackable offence.

Twenty-two per cent said the only expectation to not be fired would be if it was explicitly included in said person’s terms of employment.

The survey also looked at how comfortable UK employees are to admit they’ve had a workplace romance. Thirty-one per cent said they had cheated on a partner with a co-worker, and 39% said that either they or a close colleague have been caught kissing another employee.

The research concluded that UK employees feel tempted by workplace romances, with 75% of employees admitting to having had a secret crush on a colleague.

However, people were aware of some consequences to workplace trysts. Just under half of respondents (45%) felt that working with a partner would destroy their relationship.

Maddie Pozlevic, employee experience lead at Perkbox, said: “With the average person spending 90,000 hours at work over their lifetime – often equating to more time with work colleagues than family and friends – it makes sense that a certain amount of workplace romances will develop.

“The key is making clear to your employees from the outset what company policy or social norms should pertain around this.”

Employers' involvement in their workers' relationships has caused problems in the past. In December 2019 the dismissal of McDonald’s CEO Steve Easterbrook over a workplace relationship prompted a global debate about acceptable levels of intrusion into the personal lives of their employees.

In the US ‘love contracts’ have been workplace necessities for some time. This requires both parties to declare the relationship consensual and agree to certain standards of behaviour at work.

In the UK ‘relationships at work’ policies can be implemented, which are more or less the same concept as a ‘love contract’. It may be wise to have such policies in place to protect the business from any harassment claims brought by a disgruntled ex-lover.

Flowers, chocolates or a crate of seafood – which will you receive at work this Valentine’s Day?