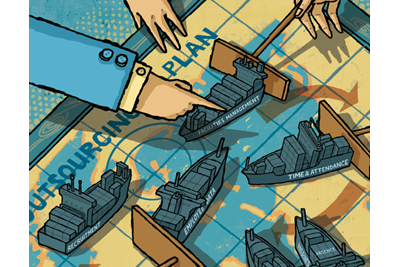 Lower-skilled and process-based jobs in the UK remain vulnerable in the face of continued popularity of business process outsourcing (BPO) to central and eastern European countries, according to research published today by professional services firm Towers Watson.

The General Industry Compensation Report shows that despite the fast economic development of many countries such as Poland, Romania, Bulgaria and Hungary, wages for low-skill business functions still remain between two and four times lower than their UK equivalents.

The report revealed despite high wages in the UK, compared to central and eastern Europe, wages for commonly outsourced roles are even higher in other Western European countries.

Germany, Belgium, France and Ireland in particular offer lower-skilled workers up to 57% higher salaries than their UK equivalents, or up to six and a half times higher than workers in the larger central and eastern European economies.

According to the research a typical account support clerk in the UK can expect to be paid an annual salary of £21,000, this compares to a Western European high of £32,000 in Belgium and an equivalent salary in Bulgaria of £5,000.

Poland and Romania are similarly competitive with salaries for this role of around £7,000 with Hungary slightly higher at £9,000.

Darryl Davis, senior consultant in Towers Watson's data services business said: "We have seen strong growth in BPO services in central and eastern Europe in recent years as wages have remained competitive compared to Western European equivalents and talent pools have been broadly able to keep up with demand.

This does leave lower-skilled workers in the UK - as well as other high-wage Western European countries such as Germany, Belgium, France and Ireland - vulnerable as organisations take advantage of lower wage levels elsewhere to make savings.

"However, companies considering this approach should be cautious as nominal wage inflation can be an issue in many emerging central and eastern European economies.

"Savings made in the short term may disappear quickly as economic development and high inflation put upward pressure on pay."

He added: "We have already seen Turkish wages increase significantly in the last few years as workers are able to demand pay increases that keep pace with the cost of living."