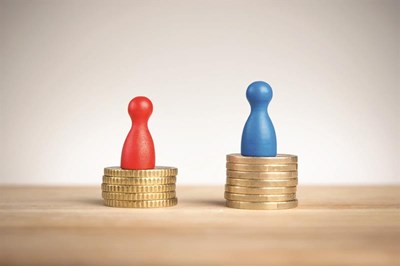 ‘The BBC is seeking a candidate to fill the role of head of the gender equality unit. Applicants should be fully conversant with gender pay issues and have a background in institutional management in order to establish absolute parity of remuneration at every level of the BBC. Salary: £400,000 if man, £200,000 if woman, £300,000 if transgender.’

So ran a spoof advertisement in a recent issue of satirical magazine Private Eye. The joke was perilously close to the bone for the broadcasting corporation, which at the time was embroiled in an equal pay scandal involving female journalist Carrie Gracie and her male colleagues, who were being paid significantly more than her. Gracie decided to step down from her role as the BBC’s China editor in protest at the disparity.

This wasn’t the only time the issue of gender pay gaps hit the headlines in February. Early in the month equal pay legal action was launched against Tesco by some of its female employees, with lawyers warning the company could face a bill as high as £4 billion as a result of the claim. Data revealed that the best-paid male consultant working in the NHS earned two-and-a-half times that of the best-paid woman. And figures released by travel group TUI revealed that women at the group’s UK Airways unit earn 56.9% an hour less than men on average – making this the largest gender pay gap to be announced so far.

The latter story resulted from TUI reporting salaries for male and female workers as part of the new gender pay reporting regime, which begins in April.

So what sort of issues have the new reporting rules highlighted so far and what can HR departments do to address any disparity in gender pay in their organisations?

The new gender pay reporting regulation is part of the Equality Act 2010 and compels companies that employ 250 or more ‘relevant’ people to publish calculations each year showing how large their pay gap is between male and female staff. The deadline to report is 4 April and as HR magazine went to press (end of February) only 1,047 firms had complied with the new regulation – leaving around 8,000 companies still to file information.

“A lot of companies have reported already and a lot of them haven’t,” says Jules Quinn, partner at law firm King & Spalding. “There are some exceptions to the rule, but very few companies have statistics to shout about as you would expect.”

Quinn explains that you can’t hold employers entirely responsible for the gendered disparity in salaries because it’s difficult – and different – for companies operating in some industry sectors.

“For example, in the energy sector they don’t get enough women studying STEM subjects in schools and universities, resulting in just 21% of the overall STEM workforce being female,” says Quinn. “In contrast 67.5% of the students studying law at university are female, and 73.9% of full-time teachers are female. As such it is not just about encouraging women to follow their choice of profession, but also supporting them in developing their careers.”

It’s also not about equal pay for many, says Dean Royles, director of HR and organisational development at Leeds Teaching Hospitals NHS Trust. He believes that some parts of the media are falling into the trap of confusing equal pay with the gender pay gap.

“Confusing the gender pay gap with equal pay is not a pedantic point,” argues Royles. “Many organisations can do a lot to reduce the pay gap, but just as importantly there is a challenge for government and society too. Why are caring roles, some of the most challenging in our society, still lower paid? Why do women still dominate these roles? What can society do to value these jobs more and to encourage more men to take caring and support roles? These are big issues requiring big policy decisions.”

As a result of the sheer scale of the issue it isn’t something that will be fixed overnight. Indeed, Patrick Woodman, head of external affairs at the CMI, argues that some organisations looking to address the disparity in wages may end up making matters worse in the short term.

“For instance if you’re in a very male-dominated sector – let’s say engineering or construction – the long-term fix would be to recruit many more young women into entry-level roles,” says Woodman. “But in the short term that could widen the gender pay gap even though it’s the right long-term fix for the organisation. That’s why it’s so important that companies are transparent and talk about what solutions they are putting in place so that people understand the approach they are taking.”

It’s a view shared by Gordon Smith, head of UK for Hired, who says that communication and transparency are key if businesses are going to tackle this issue successfully.

“Businesses must introduce transparency for women to truly know their value,” says Smith. “In turn this breaks down the unconscious bias prohibiting women from receiving the salaries they are warranted and empowers women to negotiate equal pay.”

HR departments have a vital role to play in this process. The onus is on them to monitor gender pay gaps and alert senior management to any issues, believes Quinn.

“They get the data, they can moderate it so they can get a red flag early enough and say ‘there is a problem here’. The worst thing companies could do is understand there is a problem with their data and then effectively not do anything about it,” she says.

Private sector business in particular can’t afford not to tackle any gender pay gap issues within their organisation because they potentially leave themselves open to class action lawsuits similar to the one that Tesco faces at the moment.

“This is a wake-up call for employers,” says Charles Wynn-Evans, head of Dechert’s employment practice in London. “HR departments need to be alert to the fact that gender pay gap reporting increases the focus on the issue, so they need to assess whether or not they are in a comfortable position. Are there any general or systemic equal pay issues within their business? And if these issues do arise they have to be clear about how they are going to resolve them in a way that is transparent and reflective of an employer that wants to deal with the issue rather than brush it under the carpet.”

Businesses cannot afford to try and sweep these issues under the carpet and bury their heads in the sand because the reporting regulations are here to stay.

“Employee expectations about fairness are not going away and the need to fix this is not going away, so it’s about time employers got moving on it,” says Woodman.