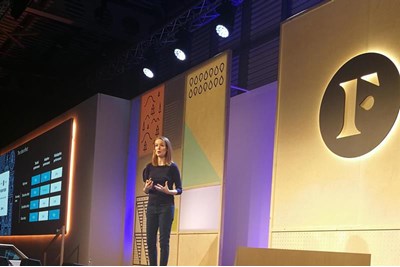 Play is an overlooked concept in understanding and measuring motivation, according to author and Vega Factor CEO Lindsay McGregor

Speaking at Slack's London Frontiers Conference, she said: "I used to think that purpose was the ultimate motivator at work, and looked for organisations with really meaningful missions. However, when you measure motives at work, play has twice the impact that purpose does. In fact motives have such an impact that when we combine play, purpose, and potential we get what is called 'total motivation' or 'tomo' for short."

McGregor added that too many organisations are motivating people in the wrong way: "Unfortunately most places are built in reverse, where we use lots of emotional and economic pressure to try and get people to do things. Our purpose statement is something big and grandiose on the wall, but we don't feel it in our nine to five. Play is something we're not even aware of at work; it's not something we have actively tried to cultivate."

She went on to explain the damaging effects that poor motives – or 'low tomo' – can have on performance, highlighting that creative thinking can be especially hindered.

"Nearly every job has an element of tactical performance and an element of adaptive performance," she explained. "If I start to lower total motivation I'd get the distraction effect. If you were trying to solve a maths problem on this stage part of you would be trying to work out the sum, but the other part of you would be distracted [because the audience would be watching you].

"Your mind would be torn. I would still get tactical performance, and your effort would in fact be higher. But your adaptive performance, or your ability to think creatively, would go down."

McGregor gave the example of a psychological experiment in which toddlers were given various motivations, such as praise, rewards, and repetition, to see how likely they would be to help someone by picking a toy up off the floor when dropped. While those who were repeatedly asked to help were the most likely to do so, over time the group of toddlers who were given rewards for helping became the least helpful.

"Do you know a colleague who will do the bare minimum? Who will complete exactly what is on their to-do list and go through the door? They offer no ideas and don't help their co-workers. This is exactly what happened to the toddlers. Over time these colleagues check out."

"When you have a high-tomo leader it will change the tomo of associates. When I'm teaching high-tomo leadership I tell leaders to go and experiment on their families first; through asking their kids to do a chore by using play as a motive rather than emotional pressure," she said.

"But what's even more important than leadership is creating truly agile routines for your teams. For all the leaders out there who are worried that they're not charismatic enough, don't worry, it's not all about you. How your team operates together is a much more powerful driver. "