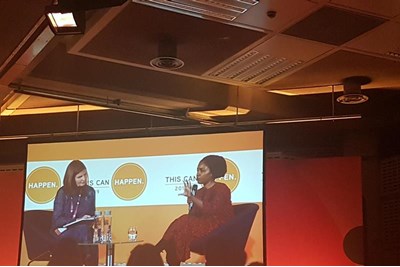 Religion and culture, flexible working and the four-day week were just some of the topics discussed at the This Can Happen: Empowering workplace mental health conference

In her keynote speech, TV chef and The Great British Bake Off 2015 winner Nadiya Hussain shared her experiences of dealing with anxiety, which she said became severe while filming for the BBC baking show.

“I’ve been anxious since I was about six. Anyone who has had a panic attack will know that it can take a couple of weeks to recover. While we were filming for Bake Off, I was having a panic attack every week,” she said.

“I’m feeling so much better now, and I’ve only had one panic attack over the past year. I’ve educated myself about anxiety and tried to learn everything I can about it. When I felt a panic attack coming on, I used to hide away and do everything I could to stop it, and it would make it worse. Now, if I feel it, I don't fight it, I accept it. I tell it to come and do its worst and it never does.”

Be aware of cultural and religious attitudes towards mental health

Hussain said that while many assume that increased awareness in recent years has made people more accepting of mental health conditions, stigma is still a very real issue.

“A friend of mine recently had a breakdown and had to take a couple of weeks off work. She got emails from her employers asking what was ‘actually wrong with her’ and when she’d be back. I was really shocked," she said.

Hussain added that mental health is still seen as a taboo subject in many cultures.

“In a lot of religions and cultures, people still don’t want to talk about mental health. My dad flat out refused to talk to me about it. He said he felt angry that I had anxiety but couldn’t explain why.

"Even after I made an entire documentary, he wouldn’t talk about it. As a Muslim, it’s hard. If you tell religious people that you’ve got mental ill-health, they’ll say that you should just have faith and pray. They don’t understand that it can be more complicated.”

A four-day working week can have mental health benefits

David Stone, chief executive at MRL Consulting Group, told how his organisation had reaped the benefits since shifting to a four-day working week.

“The four-day week isn’t political, this isn’t about [Jeremy] Corbyn or anything else, but we’ve found that people’s wellbeing and our productivity have both shot up since we introduced it,” he said.

“The recruitment industry is fast paced and full on. We’re constantly having to fend off competitors and make sure that we’re offering something different so our people will stay.

At first I was sceptical, but someone showed me the figures, and showed me how other companies in Europe were working less hours and outperforming us, and I thought, ‘I’m listening’."

He added: “Short-term absence levels have halved, people are happier, lots of them said they didn’t know how they’d find the change but that they have no intention of leaving. We’re much more efficient.”

Beware of the pitfalls of flexible working

“Flexible working can mean a lot of different things. It can mean that you’re working from home, you’re a gig worker, or you’re working remotely from a coffee shop because your office doesn’t have space for you,” she said.

“Over half of the workforce now work flexibly to some degree, and communication is really important. A lot of those important conversations can take place via WhatsApp or email, but it’s so easy for something to be interpreted the wrong way and end up with unnecessary stress and conflict.

"Make sure you’re talking to people in real life and that they’re getting the support they need.”