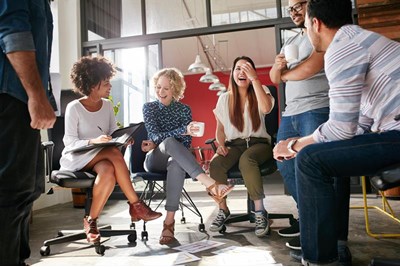 Around one in four (26%) Generation Z workers (aged 16 to 22) think their company isn’t doing enough to attract young people, according to a report from Advanced

In the report 20% of Generation Z respondents said a lack of diversity and multi-generation experience will hold their company back from modernising its key processes or systems.

Thirty-one per cent of Generation Z respondents also don’t think their company gives the younger generation a voice when it comes to technology adoption.

The report identified the younger generation as having an enormous appetite for new technology, as 80% of Generation Z and 81% of Millennials said they would be happy to work alongside robotic technology if it meant less manual processes. This drops down to 59% for both the Traditionalists and Baby Boomers.

Sixty-four per cent of Generation Z think a robot would be better at decision-making than their boss if it had access to the right business intelligence, a stark difference to the 39% of the over-55s.

The perceived benefits of using such technologies are varied. For Generation Z the biggest benefit when adopting innovative technologies is improved profits, according to 40% of respondents, whereas for Millennials and the over-55s increased productivity is top (40% and 41% respectively).

Gordon Wilson, CEO at Advanced, said: “It’s this enormous appetite for new technology, along with their innate digital skills, that will help propel businesses into the digital era.

“Generation Z is arguably the silver bullet for helping organisations successfully meet the growing pressure to be digital by default.

“Leaders must embrace the younger generation as a priority – and that means being open to change and a different way of doing things.

"What’s more, they mustn’t underestimate what this new generation can achieve or pigeonhole them into uninspiring roles. Rather, they need to create roles based on their skills, knowledge and talents.”