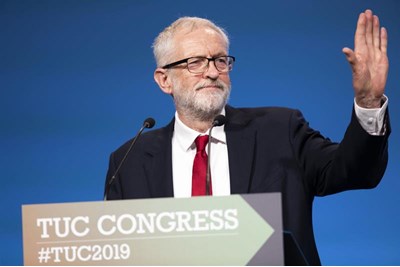 Another of Corbyn's ongoing 'initiatives' to reintroduce the good old days of the 1970s (when everyone had extra days off because of strikes, 3 day weeks, rubbish piling up on street corners, ...

Labour announced a number of proposals to reform workers' rights at the TUC Congress, including banning zero-hours contracts and increasing the power of trade unions

The Labour party has announced plans to create a Ministry for Employment Rights to bring about the “biggest extension of workers' rights that our country has ever seen”.

Alongside the new ministry, Labour also pledged to create a Workers' Protection Agency that would be embedded within the new ministry. This would enforce rights, standards and protections at work and introduce sectoral collective bargaining to set industry-wide minimum standards.

It would also give greater powers to inspect workplaces and bring prosecutions and civil proceedings on behalf of workers.


A new secretary of state for employment rights would ensure “the voice of working people will be heard at the Cabinet table, exactly as it should be”, leader of the Labour party Jeremy Corbyn pledged.


He also said Labour would ban zero-hours contracts and unpaid internships, end the 'Swedish derogation' (which permits employers to pay agency workers less than regular staff), give all workers over the age of 16 a statutory real living wage of £10 an hour by 2020, and repeal the 2016 Trade Union Act.

The Conservatives’ Trade Union Act has severely restricted the activity of unions and their ability to organise against bad employers, he said.

In a speech at the TUC Congress yesterday (10 September), Labour's shadow minister for business, energy and industrial strategy Laura Pidcock, said that “radical measures” are needed to reduce inequality in the UK. “Despite working some of the longest hours in Europe millions of people in the country cannot afford to make ends meet and are living in poverty. It is sickening that 14.3 million people are living in poverty, including nine million living in families where one or more adults is working," she said.

“The real value of wages is still lower than 10 years ago […] To meet the serious challenge of such stark levels of in-work poverty alongside the rapidly-increasing precariousness of work we need radical measures. Tinkering around the edges will no longer do.”

This rise of in-work poverty comes as research from the CIPD and the High Pay Centre in August found that there has been little progress on reducing excessive executive pay, with FTSE 100 CEO median pay now standing at £3.93 million per year, up from £3.53 million in 2016.

Alan Lockey, head of the RSA’s Future Work Centre, told HR magazine that Labour was right to address the pervasive issue of insecure work in the UK. But he was concerned the changes could be divisive for flexible workers. “A single enforcement body is welcome as a step to give workers more power in the economy. More empowered workers are crucial for a fairer future of work," he said.

“There is a huge issue with one-sided flexibility in the gig economy and proper enforcement of rights can help rebalance this. The question is whether a ban on zero-hours contracts is really implementable or even desirable – some workers will want this, others will find an outright ban overly paternalistic.”

High-quality work also depends on increasing learning and skills for all workers, he added: “We also need to consider rights at work for the majority of workers who aren’t union members. Alongside expanded workers’ rights and improved legislation, we also need to change employment practices and develop a culture of lifelong learning if we’re to make a shift to good work for all.”

Petros Elia, co-founder of the United Voices of the World Union, said that while some of the suggestions were positive Labour’s proposals fall short of delivering fundamental change to workers' rights.

“[The] Labour proposal for a Ministry for Employment Rights and Workers' Protection Agency, proposals for workplace ballots, a ban on zero-hour contracts, and a right of entry to workplaces to organise workers are positive," he said. "The rest are really moderate both in what they seek and fail to reform, and are a long way away from anything resembling an employment law framework that would genuinely protect and empower workers.”

Another of Corbyn's ongoing 'initiatives' to reintroduce the good old days of the 1970s (when everyone had extra days off because of strikes, 3 day weeks, rubbish piling up on street corners, management being prevented from managing on a commercially sensible basis, etc., etc. - still the summers were warmer, weren't they?) and keep his guide/confidant/mentor/political and ideological soulmate Len McClusky happy