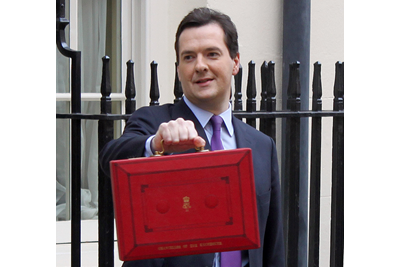 Chancellor George Osborne has promised "a laser-like focus" on raising productivity and living standards in today’s budget, the first all-Conservative Budget since 1996.

Osbourne is set to promise "bold" policies that will "secure Britain's future", when he addresses the House of Commons later.

The chancellor will begin his speech with growth and borrowing projections.

In March, growth for 2015 was revised up to 2.5% from 2.4% in the autumn statement, and then forecast to grow 2.3% next year before reaching 2.4% in 2019. Small revisions may be possible, with a cautionary note about the potential impact from the debt crisis in Greece.

Top earners may face a limit on how much they can contribute to their pension annually, cutting their annual allowance to £10,000.

Salary sacrifice, where employees give up part of their salary in exchange for other benefits, currently costs the government about £15 billion a year. While salary sacrifice is always touted as a potential target in any Budget, this time the Chancellor might actually address this, stretching his general anti-avoidance agenda to this area.

Actuarial director of pensions and employee benefits advisor Broadstone John Broome Saunders commented: “There is increasing speculation that next month's budget could see salary sacrifice under attack. Trying to stop salary sacrifice arrangements would be legally tricky, as it would be difficult to accurately identify when such exchanges were taking place.

"However, an easier solution - and one that would generate considerably more revenue for HMRC - would simply be to start charging employer and employee NI on all pension contributions. Salary sacrifice would still be possible, but would no longer help to reduce NI payments."

It is expected that rules around trading on Sundays could be relaxed, allowing larger stores to stay open for longer the current limit of six hours. A consultation is expected on handing back responsibility for this to Britain’s towns and cities.

Laith Khalaf, senior analyst for Hargreaves Lansdown, said: “The basic conundrum facing supermarkets is that consumers aren’t suddenly going to start eating or drinking more just because their bigger stores are open on a Sunday.

“Customers are simply going to spread the same purchases over the additional hours of shopping, and the supermarkets will bear the additional cost of keeping those big stores staffed for longer.”

John Hannett, secretary general of shopworkers' union USDAW, said the announcement was disappointing, and the union would campaign against the move.

Labour leadership contender Andy Burnham said in a tweet that Sundays were the only day shop workers could spend time with family.

But Small Business Minister Anna Soubry contended, on BBC Radio 4’s Today programme, that workers would not be pressured as a result into working when they didn’t want to. She said: "I want to listen to what the unions have to say and obviously I'm concerned if they say it will put pressure on workers. But I don't think they are right, actually.”

Employers’ national insurance contributions for under-21s have already been abolished. The Conservatives have already pledged in their manifesto that this would be extended to the under 25s, with the aim to create three million apprenticeships.

Many have welcomed these moves, among them Chris Jones, CEO of City and Guilds, who said in an open letter to George Osbourne: “Broadening high-quality vocational education provision can make a substantial difference to employment, productivity, and therefore our GDP. In your Budget, you have an opportunity to invest in skills and make a long-lasting impact on our economy.”

In the Queen’s Speech, the government committed to raise the personal tax allowance up to £12,500 by 2020. The 40p tax rate allowance is to rise to £50,000, and the 45p tax rate could be abolished. Estates worth up to £1 million are likely to be excluded from inheritance tax.

A crackdown on tax avoiding companies is also anticipated. The government has said it will find £5 billion from tackling tax evasion, aggressive tax avoidance and tax planning.

Osborne’s pledge to press on with £12 billion worth of spending cuts – on top of £21 billon in the last parliament – from the £220 billion welfare budget is expected to be a key theme. It’s expected this will be funded through benefit payments becoming subject to a regional cap, removing housing from young jobseekers and limiting child tax credits.

On the expected cut to child tax credits, Working Families CEO Sarah Jackson said: “From calls to our helpline, we know that parents can’t get the hours of work that they need to fit around their family responsibilities. It is naïve to think that employers would raise wages when the balance of power is already on their side.

“Parents will find it even harder to remain in employment and face hard choices about how to survive financially, care for their children and stay in work.”

Follow HR magazine on Twitter throughout the day for budget updates. We will also be sending a special budget bulletin this afternoon.