John Amaechi: HR are the custodians of humane treatment 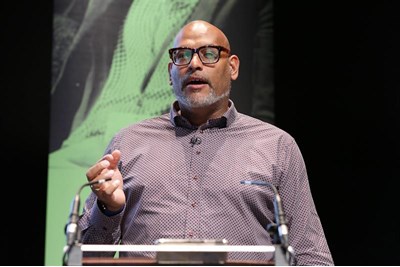 HR must see themselves as the custodians of the humane treatment of employees, organisational psychologist and former NBA basketball player John Amaechi urged in his talk at the 2018 CIPD Annual Conference and Exhibition.

Amaechi spoke on how in the current political climate “the window of appropriateness is just moving so far from what’s normative and expected and what many of us have worked so hard to achieve”, meaning that “even in workplaces we are finding ourselves challenged by approaches to ways of working that are almost regressive”.

He shared an interaction he’d once had with a worker on a cruise ship who described feeling like a machine customers “put coins in”, and described how customers and managers made them feel they should make themselves invisible.

“We treat our colleagues like vending machines. We [as HR professionals] may not; but too many of our people, our leaders, do,” said Amaechi, suggesting this to be the experience of many workers in a range of sectors.

This is not only inhumane and unethical but bad business sense in our current economic climate, he warned. “We are in this disruptive time where we need people to deliver more than their job description,” he said. “We want innovative thinkers that can respond in the moment, not machines that… deliver the same thing every day.”

Treating people as humans not resources is “how we can help our organisations reverse the trend of poor productivity,” he added.

Amaechi spoke on the damage a disconnect between rhetoric and reality can do when it comes to company values. He drew the comparison between a disloyal romantic partner and dishonest organisational values. “The bond you have with your colleagues is no less important than the one you have with your partner,” he said, explaining that many managers currently think it’s OK to “lose their cool, create a toxic environment [and] then lay a rose on the pillow of the colleague and think everything will be forgiven” when times are good or it’s annual appraisal season.

Rather than dismissing younger generations as disloyal “snowflakes” organisations must realise they create the conditions that cause Milllennials and Gen Z employees to quickly leave, by mis-selling their firm to attract people without backing this up culturally.

“They [the young employees] hear all these wonderful words and they believe you,” said Amaechi. “They are also highly sensitive to incongruence, however. So they show up with wonderful idealistic zeal and then realise what they were promised and what they experience are radically different. Then we call them disloyal when they leave. But if you’re in a relationship and someone is disloyal you leave – of course you do.”

This incongruence has an equally negative impact on older Baby Boomer employees, Amaechi explained. Their perspective can be “everyone lies” so they might as well stick at one organisation but not really put any effort in, he explained.

Amaechi also drew an analogy between how careful he has to be as a very tall individual not to hurt anyone he’s near, and how vigilant leaders must constantly be about the impact they’re having. Leaders must think of themselves as “giants” who are similarly “disproportionately powerful” he said – a power that can’t be switched on and off at whim.

“It can’t be part time,” he commented. “Erratic behaviour from leaders in organisations is like being in a relationship with someone who’s being unfaithful. No matter what they do you’re always thinking in your head ‘I know what you’re capable of…’”

“Sometimes you don’t know when you’re about to have a massive impact on those around you,” he advised. “When you’re a giant you can’t afford to take that chance.”

Amaechi highlighted that humans are unfortunately hard-wired from an evolutionary standpoint to pick bad leaders in times of disruption, because it’s tempting in worrying, uncertain times to be drawn to seemingly strong decisive characters. Unfortunately this makes it easy for leaders to lie about the scale of the “danger", and their role in protecting people from it. “This is not the time for autocrats,” he said, especially because “we still have enough of them at senior levels” that they become the role models for future leaders.

Amaechi urged his HR audience to realise their critical role as the ones “demanding [integrity] from leaders all of the time”. “They [leaders] will look to you to set the tone,” he said.

In response to an audience question regarding the power of sport to teach business and leadership skills, Amaechi added that in his opinion this is a slightly misguided assumption. Many other activities besides sport teach us important lessons about acting with integrity and about collaboration for example, he said, pointing out that many professional sportspeople do not necessarily embody such characteristics. "Sport it just the substrate... Sport teaches what we make it teach," he said.

Responding to another question regarding how he became a basketball player, Amaechi explained that he was attracted by feeling needed and admired for the first time – rather than sensing that people feared him as a tall black man.

Organisations could learn powerful lessons from this, he said. "If people see in your eyes reflecting back at them who they can be at their best, they will never leave your organisation", not even for significant sums of money, he said.