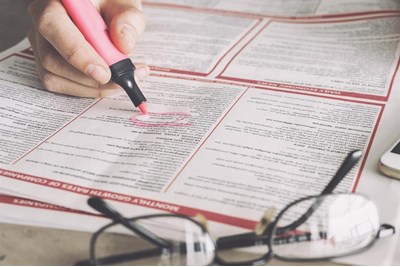 Half (50%) of jobseekers said they would be put off from applying to an organisation that used jargon in job adverts, according to research.

Milkround surveyed 2,000 UK adults about their views on the language used by companies when advertising roles. It found that complex language can be off-putting for those entering the job market, with 48% of graduates saying they had turned up to an interview unsure of what the job entailed, and three in five (59%) saying that not understanding terms would prevent them from applying in the first place.

Over half of grads (55%) feel stressed by the job application process, the research found.

Experienced workers raised similar concerns, with 68% saying they would prefer job adverts to be simplified.

Differences were found between genders, however. Men were slightly more comfortable with business acronyms, with 61% claiming to not understand them compared to 74% of women.

The research also suggested that women's confidence is affected more by not understanding job advert jargon. Three-quarters (74%) said that not understanding acronyms makes them feel under-qualified for the role (versus 61% of men) and 77% would lack confidence in applying for a role at all (versus 65% of men).

Steven Poole, journalist and author of Who Touched Base in my Thought Shower?: A Treasury of Unbearable Office Jargon, said the research shows that using jargon can cost businesses key talent.

"Research has long shown that business jargon makes people feel oppressed in the workplace, but the news from increasingly jargon-infested recruitment advertising is even worse. This new data shows that companies using jargon in their job ads are actually preventing candidates from even going for a role — and so pushing talent away. For the sake of both employees and employers it’s time to cancel the buzzwords and try saying what we really mean,” he said.

Speaking to HR magazine, marketing manager at TotalJobs Group (parent company of Milkround) Georgina Brazier said that employers often mistake jargon as a positive thing in job adverts. "While businesses want their jobs to stand out to budding candidates, some employers think that the overuse of technical terminology and jargon within their ads upsells the role. However, our research shows that it is detrimental and can put people off applying. It can also be an innocent oversight by employers who are so invested in their business – which is great – but can also forget that fresh candidates may not understand the terminology," she said.

When asked if it was ever necessary to use technical terms when hiring, Brazier said that clarity should be a priority: "We recommend a considered approach to writing copy for recruitment. Be mindful that a fresh-faced grad applying for a training scheme is unlikely to know industry abbreviations. With senior hires there’s an expectation to have the industry insights to navigate a technical advert, but don’t hide behind jargon and buzzwords – candidates of all levels appreciate and value clarity and openness around what an employer is looking for in a new hire."