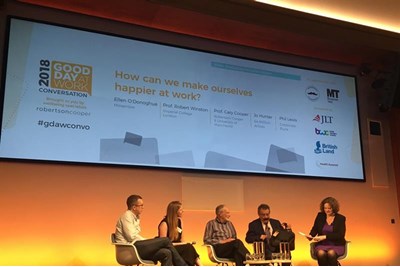 I am one of those survivors of a rough childhood. I absolutely believe that my resilience and reflective character are the reason behind my own success in industry. As a young scholar I strived to ...

Employees' happiness at work is determined by the experiences they have in their childhood, agreed a panel at Robertson Cooper's Good Day at Work Conversation 2018 conference.

Speaking on the panel, Cary Cooper, 50th anniversary professor of organizational psychology and health at Manchester Business School, explained: “Usually very successful people in the workplace have experienced a very negative life event in their childhoods, compared with those who are less successful and haven’t experienced anything as bad.”

Robert Winston, professor of science and society and emeritus professor of fertility studies at Imperial College London, also speaking on the panel, went so far as to say that the pre-birth experience affects an adult’s happiness.

Giving the example of neuroscience, he explained that the connections the brain forms and learns when people are young are crucial to later life. Wellbeing also depends on age, he added, with “people being least happy in their forties and then getting happier as they get into old age”.

However, despite agreeing that some level of happiness is deterministic, the panellists pointed out that employees can also be ‘trained’ to be happier at work.

“There are two parallel things,” pointed out Jo Hunter, co-founder and CEO of creativity social enterprise 64 Million Artists. “There’s structural inequality, but the parallel truth is we have agency to make changes in our lives through creativity.”

The problem, she went on, is that there isn’t often a creative environment in the workplace to encourage this.

“Toxicity in corporate culture squeezes people out,” agreed Phil Lewis, managing director of culture change consultancy Corporate Punk. “We need to encourage creative expression at work but first we need to figure out what we mean by creative expression.”

The panellists spoke of a number of ways that employers and employees can help make employees happier at work. The emotional intelligence of a leader was cited as a critical factor in the happiness of their teams.

Pointing to his own experience, Winston said: “In my lab I’m probably one of the least intelligent people, but what I’ve done is create an environment where we can be ourselves and go out together and I think that is one of the most important things.”

For Hunter, leaders should focus on "mentalising" to help employees be happier at work. This is “the psychological term where people genuinely put themselves in the shoes of others in their team and think: ‘do I know what’s going on in their lives outside of work and how they really are?’”

The importance of authenticity and being able to bring “your whole self to work” was also highlighted.

“People often turn up to work with a certain persona that they’re wearing and when everyone does this we don’t know how to relate to each other,” said Hunter. “If the work environment doesn’t allow us to turn up as ourselves, rather than these personas, this can shut us down.”

Lewis recommended leaders create a physical environment where employees have to cross paths with others in the office because “collision fosters communication” and “connecting with others is one of the biggest things that makes people happy”.

I am one of those survivors of a rough childhood. I absolutely believe that my resilience and reflective character are the reason behind my own success in industry. As a young scholar I strived to blend thinking that my poor socio economic roots would hamper my progress and create a negative impression amongst my peers. Now, I tell my own kids to be certain to present a true representation of themselves, its much more colourful and makes a far more interesting dialogue amongst the grey of academia. Moreover, colourful creative individuality is a bigger score in an interview than a top degree with no personality.

spirituality at work leads to happier and creative expression in the workplace.

I too had a deprived and violent childhood. When I was younger I tried to hide my past as I felt ashamed but now I am open and honest about it and I feel so proud when people praise me for my caring ways and thank me for my acts of kindness.