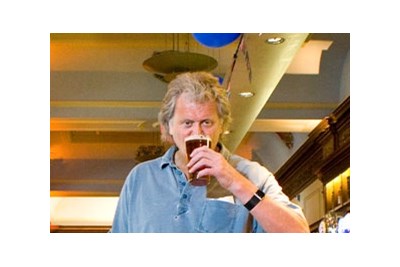 I am sooooo hoping we will see Tim Martin debating on our TV...there is just a week to go before the voting day...heres hoping. I have been to more than 80 of his pubs and love them..as I do him.

Clothes clearly aren't important to Tim Martin, founder of pub chain Wetherspoon. But how his staff look - everything from their rapport with customers to their pint-pulling expertise - is duly noted in a little black book he carries on visits to his pubs and which he uses to debrief his HR team.

He's worth £750 million, but as all six-foot-six of Tim Martin lollops into the Met Bar, a slightly gloomy pub in London's Baker Street, you would think his entire wardrobe that day is scarcely worth £75 - and that's including his shoes.

"Sorry, I've got buttons missing in my polo shirt," he says to the photographer, fumbling at a faded top and suddenly conscious he is much worse-dressed than the majority of student/OAP regulars here supping their 99p special-offer pints. At those prices, this pub needs no further introduction. It, and 751 others around the UK, comprises the Wetherspoon chain. Collectively they have contributed to half-year profits of £36.2 million, up a staggering 41% on 2009, and looks clearly are deceiving. As the dishevelled Martin, 55, still sporting the mullet hairstyle he first grew 40 years ago sits down, he can do so in the knowledge he doesn't have to care how he dresses. He not only owns this pub, he owns them all.

The story of Wetherspoon, which began life as Marler's Bar, Barnet, in 1979 and will this year turn over £1 billion at a time when 52 pubs a week are said to be closing, is, more than most, a story about maximising the potential of its people and a personal approach to HR. On top of the 27,000 people Martin currently employs, 250 new pubs creating 10,000 more jobs are set to open over the next five years; but what he says he will never compromise on is staff training, an HR lesson he learned very early on in his career.

"Back in the 1980s, it was quite revolutionary to be investing so much money in staff training," he says (today £1.5 million is spent on it annually). "But when you're running a small business on your own, as I was back then, you are the HR department. I knew it would be goodbye Irene if we didn't make sure we had the best standards."

The reason for his attire is that today he is on the road, doing what he spends two days a week doing - travelling the length and breadth of the country, personally visiting his pubs. And, make no mistake about it, everything, literally everything - from (ironically) the appearance of staff, to the size of the head on pints - is assiduously noted down in a black book he travels everywhere with. It's a habit he has had for 30 years. "I once stayed in a little Cornish hotel, and realised it was better run than my pub; I remember going to a McDonald's, thinking its toilets were cleaner than ours; so I started writing things down. I still do it, and I report everything back to our weekly 'Big Meetings', attended by all the board, and particularly our HR people."

As if on cue, a cappuccino is delivered to his table, and there is a break as he assesses its quality. The silence is almost palpable as he sits in quiet contemplation. "Not quite enough froth," he notes. "I will mention that," he mumbles to himself. "We've got to get it right ...

we've had whole video training sessions on this," he continues, forgetting I'm there. "How can we move onto flat whites (coffees) if we haven't got this right?" he trails off.

It's slightly comical watching this sequence of events, but Martin clearly takes his people's performance seriously. The note-taking is now an unbreakable force of habit, but Martin freely admits he steals HR ideas from whoever resonates with him: his business heroes, for example, are GE's Jack Welch and Wal-Mart's Sam Walton. "We didn't have an HR director until 1989; by then we had a dozen pubs," he recalls. "Looking back on it, we probably needed one about five years earlier than that," he says, one feels, regretfully.

A big turning point in his attitude to people was when the business was at four pubs. "I was sued for unfair dismissal," says Martin, after he sacked a barman for drinking on duty. "I represented myself. I'm not proud of having been there and it was a traumatic experience," he reflects. "Although I won, I've not forgotten what the chairman of the tribunal said in his summing up - that what made him anxious was that because I'd put up with bad HR for so long, I was in some way condoning it. My emotional intelligence at that age was not that high. I was still in my twenties, and out for myself. My awareness of what made people tick was poor; as the business grew I realised it was all about teams."

With an HR department now firmly embedded (although Martin says he thought HR sounded "pretentious", so decided to rename it 'personnel'), their main event is the weekly debrief on his pub visit observations. Just so they don't feel left out, the HR team is also sent on 'pub liaison meetings' to see pubs themselves. But with such personal visitations dominating the agenda with, some might say, over-attention to detail, does Martin admit he's a meddler, distracting HR from the wider concerns of the business? "I think they probably think I'm a pain,"

he says considering the question. "But I don't think I'm like other blocking CEOs. HR doesn't have to persuade me to introduce more training, for example."

In fairness, Wetherspoon's director of personnel and legal, Su Cacioppo, has had the freedom to make her mark. Last September Wetherspoon became the first pub chain to sign the Skills Pledge. It started smoke-free bars as early as 2006; it has abolished retirement ages (90-year-old kitchen-hand Emily Bullers is its oldest worker), and has introduced a pay scheme where managers can earn an extra 50% of their salary in bonuses. As a result, the turnover of managers is now just 10% - way below industry norms and most stay at least eight to 10 years. In 2009 £12.8 million was paid out in staff bonuses (up from £9.8 million in 2008). Of these, 93% went to non-directors, with 82% going to pub workers. Half of the directors are former regional or area managers. But Martin's attention to detail still remains a major factor in deciding policy. "I recently found out shift leaders don't have the same bonus structure as shift managers. That's something I talked to Su about," he says unapologetically.

One of the biggest HR policies came five years ago when Wetherspoon took the radical decision to open all of its premises at 9 am to cash in on the lucrative breakfast market (it now sells 715,000 a week). On 28 April - on Martin's 55th birthday - the pub chain upped the ante again. All pubs now open from 7am.

"Some of our airport pubs have opened at 5am for years," Martin says, dismissing the suggestion this is a huge ask on the built-up goodwill of staff. "I asked airport managers if they thought the rest of the chain could do this, and they said yes. So I think it's doable; it just needs adaptation," he adds, "I wouldn't have allowed it if HR had come back and said we'd be working people to the bone. They had a opportunity to speak, and did so."

You have to trust him. Martin is not the sort to risk everything crumbling around him because of an ill-advised strategic decision. "I try to do my best to make sure staff stay motivated and happy," he says. "It's a Sisyphean task," he exclaims, referring to Sisyphus of Greek mythology, who for eternity must push a rock up a hill in punishment for deceiving the gods, "because what customers like in pubs is individuality and rapport with staff. You can talk all you like about building brands, and marketing, and stuff like this," he says, "but I still say 80% of your view of a pub is how your pint is poured. That's why we do our best to train and keep staff motivated."

And Martin sticks by his people, when personnel might have acted to remove them, or close pubs down. "We're ultra-patient, ultra-dogged. I've got a quote on my office wall that says: 'We never get tired, we never get depressed' - that's how Wetherspoon works. One of my best-performing pubs didn't make a profit for five years, but I knew the people, and knew it would work in the end."

Remarkably, Martin claims to know more than 1,000 managers and bar staff personally. How many other CEOs could honestly say this? "It means managers tell me - that is, head office - what to do, as much as I send policy down from the top," he adds.

Today's expedition involves Martin driving north in his beaten-up Volvo to see staff in the Doncaster region (unannounced of course), where he will no doubt hear it as it is if there are any people issues that need bringing to HR's attention. And despite the fact he will be 60 when his vision for his 250 new pubs comes to fruition (his aim is to have a pub per 40,000 people of the population), he shows no signs of slowing down. "I'm with Warren Buffet, when he said he wants to retire five years after his death," says the avuncular Martin.

"That reminds me ...," he says, starting to go off on another of his private musings. "I offered him a job once. I offered him a post-retirement role with us," he quips. "He hasn't replied, though. Funny that. But there's a serious point here," he adds, coming back to the present. "My next big task is to start thinking about who's going to replace me. It would be negligent of me if I didn't produce a good number of candidates for my job."

Maybe this is one HR issue he can't solve on his own. But you can be sure, as he clocks up yet more miles driving to his next pub, he'll definitely be giving it some thought. One down, 999 people he knows still to go ...

MARTIN IN A MINUTE

- You were number 428 in last month's Sunday Times Rich List. I guess that makes you successful? "I used to be a lot higher, before all the billionaire Russians got in on it. Seriously, there are a lot of prats on that list. Wealth is not an end in itself. I walk most places."

- What's the most extravagant thing you own? "My wife, and even she's a bit mean. I don't do big mansions, yachts or New York penthouses. I have got three surfboards, though."

- What does success mean to you? "Seeing the part-time bar maid I knew in Windsor become pub manager in Swindon."

Great interview saw tim on questing time comes across as a good guy in life talks common sense, pubs are the cleanest in the land well done

I am sooooo hoping we will see Tim Martin debating on our TV...there is just a week to go before the voting day...heres hoping. I have been to more than 80 of his pubs and love them..as I do him.

what a fantastic guy. good luck looking after your brilliant staff