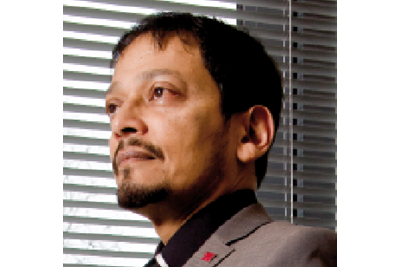 According to Chan Abraham, CEO of social housing company, Luminus, all of his staff say Sunday is the best day of the week. Why? “Because it means tomorrow they go back to work.” Where, naturally, the first working day is internally called ‘Glorious Monday’.

Surprising though this opening gambit might appear, by the time you have spent a morning with someone who wouldn't look out of place on a US evangelical TV channel, nothing surprises you any more. I am at the Luminus Huntingdon, Cambridgeshire HQ for one of Abraham's monthly staff conferences, where the whole company is in attendance. He struts in last, onto a stage, with an almost rock star-like entrance and a booming 'Are you ready to be inspired the Luminus Way?' Spontaneously, his congregation - for that is what they seem to be - are rapt in chorus, chanting 'yes, we are', punching the air, whooping and smiling wildly.

As an outsider, it appears to me as though staff are being whipped up into a frenzy of excitement. Continuing the evangelical feel, Abraham ends with what can only be described as a sermon - he calls it his 'message of the month' - ten minutes walking back and forth, commanding his employees' gaze, proselytising about 'daring to dream'. "Dare to dream for yourselves," he proclaims. "One of my favourite statements is, 'life in all its fullness'. Imagine this now. If you live for yourself," he warns, "your life will be unhappy. If you live for others, your life will be a much happier place. Dare to dream."

To the uninitiated, this bizarre event has hokum written all over it. But, as one staff member says, "it's genuinely how we roll" and the one thing that definitely can't be questioned is the fact this unorthodox methodology seems to produce an amazing and energising sense of wellbeing. Earlier this year, Luminus not only came second in the Sunday Times Best Companies to Work for (SME category), but won its Special Award for Wellbeing. It is on top of a whole string of other wellbeing success stories (finalist, Occupational Health Awards 2010 - Award for health promotion and wellbeing; Winner, National Business Awards 2008 (Regional) - Employer of the year; finalist, National Business Awards 2007 (National), Health, work and wellbeing award).

Abraham is in no doubt as to why this is. "Wellbeing comes from leadership," he says. "What drives me is a passion to lead, and make a difference to people's lives. We want our people to have an emotional connection with the company. For me, it is about being a shepherd, and having concern for my flock."

This concern manifests itself in giving all employees access to personal and professional development through its Luminus Learning Zone, offering staff courses on everything from public speaking to photography, via cookery. Each New Year, the company launches initiatives to help staff improve their physical, financial or emotional health. These are just the trimmings, though. What really matters to Abraham is the internal sense of wellbeing he hopes to inspire staff to have.

"We say, 'let's make work something you can smile about'," says Abraham. He says he is shocked by the 45,000 NHS workers who call in sick every day: in his organisation, sickness absence is virtually non-existent. In 2010, in fact, he gave out 98 'lifestyle day' awards to staff (staff can use these awards to take an extra day's pay or holiday leave). These are given to those who have had no sickness absence in the past year.

This personal-improvement approach to wellness - Abraham says, "I want to help staff be as happy as they can be, and by extension how they can improve themselves" - might not be everyone's cup of tea. The missionary undertones are certainly there and Abraham by his own admission is a religious person; he even has a cassette of Nashville String Machine's Hooked on Hymns on his desk. "What does 'evangelical' mean?'," he retorts, when asked about this. "It means good news. Shouldn't I be giving staff good news? Here people don't fear the Monday blues; we don't do office politics, sniping behind people's backs. We even hate the ambush of monthly appraisals. Instead, our whole culture is one of openness and transparency. Each interaction is a moment of truth."

Abraham, also founder of 'Leadership International', a group that says it wants to encourage '3rd Millennium Leadership', was formerly a strategy director at Cambridgeshire County Council and says he had a "light bulb moment" there in 1998, to make a difference to social housing. From nothing (and 128 meetings later), he persuaded Huntingdon District Council to hand over the running of its entire housing stock to him, after canvassing residents and promising them a better deal.

It is this promise of helping others, by being a fair landlord, that he says his staff buy into, and where he and they get their sense of inner wellbeing: "If we don't change people's lives, we can't leave a sustainable legacy for the future," he says. "Altruism is part of the human spectrum. CS Lewis talks of the deep magic that the universal sense of morality brings, and that's what we show our staff they can help achieve," he says.

It leads to Abraham's catch-phrase, 'a more excellent way of doing business', a grammatically-suspect motto that nevertheless creates the desired effect. And it is leadership rather than HR that he thinks is what creates the overarching wellbeing culture. "Leaders, not well-intentioned HR people, should be responsible for motivating and engaging staff," he asserts. "My task is being connected to the people who work here."

All this makes the specific mental wellness approach to wellbeing (Luminus has cash plans and the like, as any well-meaning business should) all the more fascinating. "It is a choice of mindset that people make if they think the world is descending into chaos," he says. "Good people that do nothing don't make a difference. But when people start to make a difference, that's when things can change, and staff feel happy in themselves." He says: "No-one who works here has to have a 'faith'," he clarifies, "just a faith that they can make a difference. We are all about making the most difference that we can make with the hours that we have available to us."

It is a persuasive, if not alternative, view of how to create staff wellbeing and, like it or loathe it, it seems to work. Staff conferences that end with a Mexican (retitled 'Luminus') wave do get people going - and there's no obviously somnolent raising of arms here. Staff turnover is a very low 7% (compared to the industry norm of 17%), and those that do leave tend to be its tradespeople, rather than head office staff.

All Luminus employees get given a fridge magnet, which says 'something good is going to happen to me today' and employees do refer to its inspiring message unprovoked.

If staff genuinely feel their day is going to be a good one, it is easy to see how their daily sense of wellbeing gets fully topped up by coming to work. During the Christmas snow, staff dipped into their own pockets to lend money to tenants to feed the meter and heat their cold homes. What disaffected member of staff, with no interest in their customers, would do that?

"No-one gets the feeling that if they come to work their creative ideas will be put down," Abraham says. "What drives me, the business and our people is a sense of a moral code. Servant leadership is my model - being willing to put aside ego to help make people the best they can be."