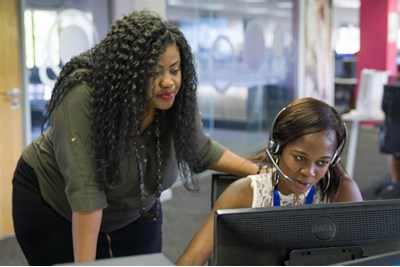 South Africa has an extremely high youth unemployment rate, but Webhelp is extending opportunities to this demographic with help from social enterprise Harambee

Business process outsourcing (BPO) firm Webhelp works with more than 500 clients in 35 countries, helping them manage their customer experience across a range of channels including digital, social and traditional voice. Founded in 2000, it has grown through acquisitions as well as organically to comprise more than 50,000 people. In the past four years it has grown by more than 250%, posting revenues of €1.3 billion for 2018. It has 140 locations across the globe, including offices in Denmark, Germany, Italy, Paris, Spain and Ukraine. In recent years South Africa has been a growth area for the organisation and it now has two offices there – in Johannesburg and Pretoria.

Despite South Africa’s economy growing modestly by 0.8% in 2018 some 40% of young South Africans will never find secure and stable work, according to Statistics South Africa. In June the government announced plans to create more than two million jobs for young people through its Expanded Public Works Programme, Youth Employment Service, and National Youth Service. But since 2011 government-funded not-for-profit social enterprise Harambee (Swahili for ‘all pull together’) is making inroads into unemployment; it’s helped more than 140,000 young people into the formal economy.

Now the seventh-favourite brand in South Africa among low-income earners, Harambee works by partnering with 500-plus locally-based organisations, of which Webhelp is now one. Two-and-a-half years ago youth employment accelerator at Harambee Evan Jones teamed up with Cathy Kalamaris, managing executive, people at Webhelp (SA).

“We were approached by Harambee in 2017 to see if a partnership would interest us,” recalls Kalamaris. “At the time our CSR strategy was very much trying to focus on putting back into the community, so a union felt right.”

Harambee’s model involves creating bespoke, eight-week, pre-employment, work-readiness training. The government funds the majority of the cost but 15% to 20% is charged back to partner organisations, so it’s vital partners understand from the outset that the cost of funding this type of initiative is better spent here than on recruiting from more traditional sources – such as universities and colleges.

“Investing in training aimed at a pool of people it would never normally choose to recruit from – those from outlying townships, with fewer academic achievements – can be a tall requirement,” accepts Jones. “But by the same token businesses also don’t value education certificates because the school system is a failed one.”

He adds: “A partnership with Webhelp was extremely important because BPO is the highest-growth sector in the South African economy, and one that is a perfect fit with younger people as a first job.”

Because Webhelp has strict service metrics it must meet for its clients Kalamaris decided to start small to test the waters. “We started with a cohort of 20 people to understand the type of training needed, and how the recruits performed in terms of sales and service levels,” she says. “After the eight weeks of Harambee training new joiners then had five weeks’ further training with us because we have to make sure the people we bring in understand the colloquialisms of the audiences they would largely be dealing with.”

This was an education process for Webhelp too. It had to retrain its HR people on how to interview people, focusing on ensuring they could identify people’s transferable skills rather than defaulting to asking what work experience they already had (which invariably was none).

Any initial trepidation Kalamaris might have had has been completely quashed by the results Webhelp has achieved – not just with the pilot, but through the hiring of significant numbers since. “The pilot was remarkable,” she recalls. “Of the 20 people we took retention was 96%. But more than this, the performance of these people compared to our existing experienced staff was either equal or better around key metrics like service and call resolution times.”

She was so impressed that in 2018 Webhelp hired 150 Harambee-sourced young people in a single hit to service one UK customer, while a further 60 were brought in to work on a mix of other clients. Of Kalamaris’ current cohort of Harambee-sourced staff there is a 100% pass rate in training, retention is 90%, and NPS scores have been consistently high.

“But it’s the ROI that has really blown us away,” she adds. “According to our first full year’s analysis we’ve achieved a 46% cost saving by hiring from Harambee. Not only this, we’ve helped people into work who might never otherwise get a chance.”

She continues: “Our young joiners have been so good 12% have been promoted to higher positions already. The success has led us to totally rethink how we assess for skills.”

According to Evans one UK brand Webhelp works with has been so impressed that it’s committed to supporting Webhelp to hire a further 500 staff dedicated to it. He says Webhelp is so bought into the process it plans to hire 20% to 30% of all its people exclusively via Harambee in future. “We’re now assisting Webhelp to benchmark what its top performers look like, and how we can bring more of these people into the funnel,” he says.

The partnership has been a success for Harambee too. Partly based on working with Webhelp, in 2019 Harambee won the prestigious 2019 Skoll Award for Social Entrepreneurship in recognition of the trusted and leading role it plays in solving youth unemployment at scale in South Africa.