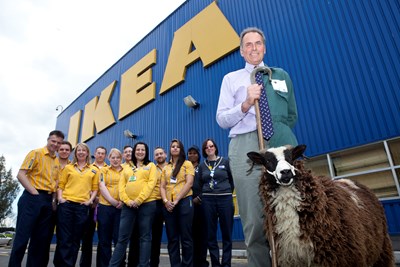 Ikea has become the first national retailer to commit to paying its staff the Living Wage.

The home furnishing retailer has announced it will pay all 9,000 UK workers at least £7.85 an hour from the 1st April 2016. The rate for employees in London will be £9.15 an hour. These are the rates set by the Living Wage Foundation.

The news follows chancellor George Osborne’s announcement, in his July budget, that employers will have to pay a living wage of £7.20 an hour to workers aged 25 and over from April, with the rate rising to more than £9 an hour by 2020.

Following the Budget, the Living Wage Foundation welcomed the chancellor's decision, but described it as "effectively a higher national minimum wage and not a living wage".

Responding to Ikea’s announcement, director of The Living Wage Foundation Rhys Moore said: “We are delighted with this momentous announcement that IKEA will be accrediting as a Living Wage employer. This is a historic moment in the life of the Living Wage movement, as IKEA become the first national retailer to announce their commitment to the Living Wage and they will reward all their staffwith an hourly rate of pay that covers the cost of living.

“This is a huge step for the British retail sector and we hope that many other businesses will follow the leadership IKEA is showing on the issue of basic pay.”

IKEA UK and Ireland country manager Gillian Drakeford said: “We believe our people are the inner strength of our company, so it is only right to ensure we provide a meaningful wage that supports the cost of living.

“Introducing the Living Wage is not only the right thing to do for our co-workers, but it also makes good business sense. This is a long-term investment in our people based on our values and our belief that a team with good compensation and working conditions is in a position to provide a great experience to our customers.”

Ikea’s decision will benefit half of its 9,000 UK employees. Meanwhile the government’s Living Wage pledge is expected to boost the wages of six million people in both the public and private sectors.

The Living Wage Foundation has accredited more than 1,600 businesses, including well-known companies such as Nestle, Nationwide and British Gas. But until now the only household name retailer signed up was Burberry.

Campaigners will continue to press the biggest chains, such as Tesco, Sainsbury’s and Next, to pay the voluntary rate, which is calculated according to the cost of living.

Other recent Ikea employee initiatives include the One IKEA Bonus programme, which sees all co-workers receive a performance-related bonus, and the Tack! loyalty programme, which rewards co-workers who have been with IKEA for more than five years with an annual contribution to their individual pension plans.

Osborne's July announcement met with concerns from the business community, with the CBI describing it as a "big gamble".