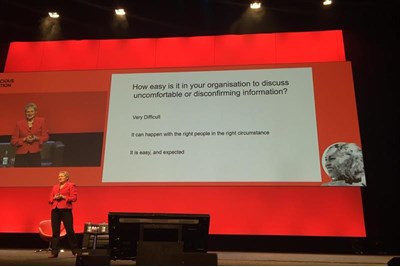 Great stuff - I completely agree organisations need to change to be more agile, democratic etc. However, I'd suggest there's a bit too much focus on hierarchy here - hierarchical structures don't ...

“One of the few sources of lasting advantage left is people”, according to academic Rita McGrath

In her opening keynote at the 2019 HRD Summit, the Thinkers50 thinker, professor of management at Columbia Business School and author of The End of Competitive Advantage described the critical importance of “strategic inflection points” to organisational success. She defined these as “those moments that tell you you’re on the brink of something really different” and that the business must change strategic direction.

McGrath pointed to the example of Blackberry as a company that realised too late the profound impact the launch of iPhone and Android smartphones in 2007 would have on its business model. “The assumption was that they were consumer devices and wouldn’t cross over into the business world,” said McGrath, warning that such changes to a company’s operating conditions “don’t happen overnight”.

“In the beginning it doesn’t look like much but then the effects are more and more apparent,” she said, stressing the critical importance of HR’s role in empowering people right across organisational structures to spot the early warning signs.

“Change happens at the edges,” said McGrath, comparing this to melting snow. This means traditional hierarchies must be reformed, she said, so that those lower down can share information with senior decision-makers.

Hierarchical organisational design made sense in an era where senior leaders genuinely “had more information” and so were better equipped to make decisions, said McGrath. “But what we’re learning is that it just doesn’t represent life right now; the best information is at the edges. So the skill is making sure that information makes its way to where strategic decisions are made,” she said.

When a business realises it’s at a critical inflection point the trick is for leadership to coalesce employees around a simple, achievable, motivating goal, advised McGrath. She gave the example of Build-a-Bear Workshop, which hit financial difficulties in 2008 due to consumers reining in luxury leisure spending during the recession.

McGrath praised founder and CEO Maxine Clark’s mantra at the time of 'SDSS' (“we need to Stop Doing Stupid Stuff”), and “earn a dollar” – which encouraged all staff to think about how they could save or earn just a dollar each day to keep the company afloat. “People thought twice about buying that box of paperclips… Of course there was a lot else going on, but it was something for people to focus on; they created that clarity around ‘what are we trying to accomplish?’”

Transparency about problems is also key at such times, McGrath advised. She gave the example of former Ford CEO Alan Mulally's mantra of ‘you can’t manage a secret’, relating how Mulally spotted all company financials were being reported in deceptively positive-looking green and encouraged senior leaders instead to “get those reds and yellows on the table”.

Creating a feedback-rich environment is also crucial, she said, citing the example of a CEO who would make ‘speed up’ hand gestures when people were presenting to her, because she thought that was a helpful signal that she'd understood. The CEO changed her approach when someone was honest enough to admit that junior employees were no longer being allowed to present to her in case it demoralised them.

Lack of time is the biggest enemy to inflection-point-spotting, McGrath warned. She advised her audience that she wasn’t 'going to ask [them] to change their li[ves]'.

“What I think you can change is how you spend an hour a week,” she said. “When people ask why people miss these inflection points I say it’s because we’re so busy – it’s emails, deadlines…”

All of this – encouraging listening and purposeful leadership, agile organisational design and empowering employees to realise it’s ok to try to innovate and fail – is squarely “the HR agenda”, McGrath concluded by saying.

Great stuff - I completely agree organisations need to change to be more agile, democratic etc. However, I'd suggest there's a bit too much focus on hierarchy here - hierarchical structures don't stop people collaborating across functions or sharing information bottom up - it's rubbish systems and managers that do that. And just reforming hierarchies isn't going to do much to make organisations more agile etc. The real opportunity is extending beyond functions to projects, communities and networks which give more voice to the 'edges'. These are generally less hierarchical but that's a complementary outcome of the shift not it's main objective.