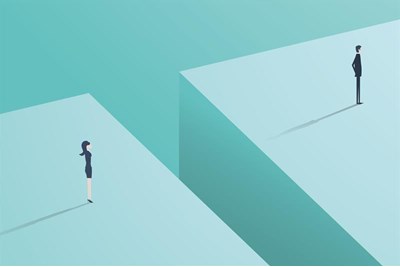 The gender pay gap for HR managers has been revealed as 10%.

According to analysis of managers’ salaries conducted by the Chartered Management Institute (CMI) and XpertHR, male managers in HR on average earn £4,469 more than their female peers. While the average salary of a female manager stands at £40,177 this rises to £44,646 for men. This includes salary and bonuses, as well as perks such as car allowance and commission.

However, the HR pay gap is considerably lower then the average gender pay gap across all UK industries, which stands at 26.8%.

The gender pay gap is particularly high in finance jobs, with male managers earning 33.9% more than their female peers (equating to an average salary difference of more than £18,000) the research found. The pay gap is at its lowest in IT where male managers out-earn female colleagues by £3,758, or 8.2%.

The analysis also found that just 77 of the 7,850 UK companies now obliged to publicly disclose the size of their gender pay gap have so far fulfilled this obligation. Under the reporting regulations that came into effect in April 2017 employers with 250-plus employees have until April 2018 to disclose.

“Our data shows we need the government’s gender pay gap reporting regulations more than ever,” commented the CMI’s chief executive Ann Francke. “Yet less than 1% of companies have reported so far. [So it's] time for more companies to step up and put plans in place to fix this issue. It’s essential if UK companies are to survive and thrive in the post-Brexit world.”

The findings also reveal that women are far more likely to fill junior management positions than men (66% versus 34%), and men much more likely to occupy senior positions (26% of director-level roles are occupied by women, 74% by men).

Bonus payments were found to be exacerbating the problem, with the gender bonus gap across all managers standing at 46.9%. This increases considerably at C-suite level where the average bonus for a male CEO is £89,230 compared with £14,945 for a woman – an 83% bonus pay gap.