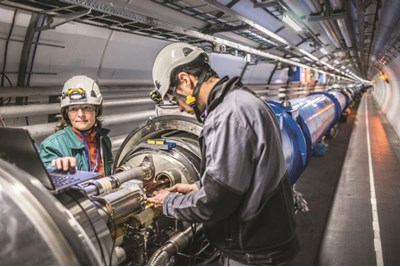 For James Purvis, head of HR at European organisation for nuclear research CERN, HR’s role is like that of a small tugboat.

Speaking at the annual MERIT Summit in Seville, Purvis explained how HR can sometimes feel small in comparison to the “cruise ship” that is the wider organisation. No matter the size difference though, the business cannot work without it.

“If HR is the vessel that pulls the company in the right direction then shouldn’t it also be continuously innovating the way that it does so?” questioned Purvis.

While HR is often looking at how it can make improvements to a business, Purvis noted that the department could do more to innovate itself.

Purvis has firsthand experience of working in an innovative environment. It was at CERN that computer scientists Tim Berners-Lee and Robert Cailliau came up with the Hyper Text Transfer Protocol (HTTP), as a way to allow physicists to share information with one another.

Drawing parallels to new ideas in HR, Purvis added “it doesn’t really matter if it’s innovation, discovery or invention, whatever it is it’s just got to add something of significance.”

Purvis shared an example of one of his HR team’s attempts at innovation.

“I asked my team to give me the iPhone of HR,” he said. “It wasn’t the users who designed [iPhones], it was Apple that said ‘this is what our users want’ and that is what I wanted my team to create. An HR tool that our employees didn’t even know they needed.”

CERN’s HR department put together a project team of 250 volunteers who defined a methodology that included collecting ideas through electronic devices, and handwritten notes from all around the HR department. The ideas were then put into themes.

“In June 2019 we ran something called a world café format that included roundtables, constant conversation and interaction between 70 people. There were wall-to-wall Post-it notes absolutely everywhere and so many great ideas came out of it,” said Purvis.

The HR team then did analysis work and narrowed it down to the top five ideas.

“So what did we gain from this lengthy process? What innovative HR tool did we come up with? Absolutely nothing,” he told the amused delegates.

“There was no innovation, we had failed,” said Purvis. He explained that he felt HR has fallen into the ‘faster horses syndrome’, much like how if Henry Ford had asked customers what they wanted, they would have asked for faster horses and he would never have come up with his motor cars.

When given the specific task of improving leadership Purvis gave a more positive example of innovation.

“Typically, if you throw this challenge at HR, traditional tools like new programme design and leadership coaching get suggested.

“These work well, but because of the size of HR and how busy we were I suggested we throw it out to the whole company,” he said.

CERN crowdsourced knowledge from its employees and came up with a new design for an upward feedback system, allowing people to give comments to their supervisors.

“What I didn’t expect is that unlike HR initiatives, where we have to sell the new L&D programme to employees and persuade them to use it, because the business was driving it it sold itself,” said Purvis.

Another idea he pioneered at CERN was the use of asynchronous interviewing. Ten years ago, Purvis explained, he met a farmer from Ireland who came up with the idea of video calling to avoid long-distance travel for interviews.

“When I met this guy I was blown away,” he said. “I took it to CERN and was told ‘this is ridiculous nobody is going to want to do this’, but now everybody uses the technology.”

When introduced video interviewing reduced recruitment costs at CERN by 50% and doubled the quality of the recruitment process as a whole.

“So it is possible to innovate, but it takes time to implement,” said Purvis. “You have to ride against the flow and persevere with your ideas.”