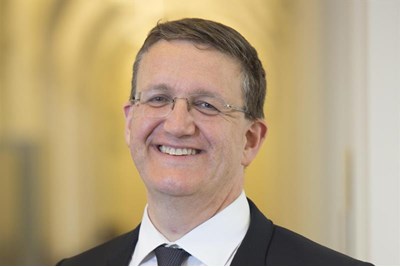 Rupert McNeil is responsible for bringing a disparate organisation together, solving its people issues, and showing its merit to the wider world

Walking to meet government chief people officer Rupert McNeil at the Cabinet Office you get a distinct urge to lay a trail of bread crumbs. So labyrinthine are the courtyards and corridors people often get lost, my guide informs me. There are apparently even maps at regular points throughout the building.

A sense of the scale and complexity of the civil service is clear from just a short walk through this tiny part of its physical footprint. While 1,717 employees work at the Cabinet Office in Whitehall, the civil service as a whole consists of 420,000 employees, spanning the whole gamut from prison officers to benefits and pensions administrators, from policy analysts to Jobcentre coaches.

So my first question when we finally reach McNeil is just where a person tasked with overseeing HR here might start.

McNeil was appointed in January 2016 from Lloyds Banking Group, where he was group HR director. Previous roles include UK HRD at Aviva and HRD for global retail and commercial banking at Barclays.

It quickly becomes apparent just how rewarding McNeil finds getting to grips with an entity so diverse, and so different from his previous posts. “Fascinating” is a word that crops up a lot.

But being a relative outsider doesn’t just imbue McNeil with a motivating awe and enthusiasm for his new environment. It also allows him to step back from the complexity to see what might need to change.

Emerging in the last five years or so in financial services has been a “systems thinking approach, where you get the people who actually know the customer working directly to make it better for the customer,” says McNeil.

“The civil service is already learning from that,” he says. “It’s citizen-centricity. It’s thinking how do you get great outcomes for the nation? And thinking end to end; starting at what you want to achieve and working back.”

McNeil is responsible for delivery of the Civil Service Workforce Plan, which sets out what it needs to do to attract the most capable and public-spirited people, and build a culture and ways of working that are as good, if not better, than anything on offer elsewhere. Integral to this overall mission to become much more outcomes- and customer-focused is breaking down silos, explains McNeil.

“A lot of this is about collaboration and the organisation is actually a fantastically collaborative environment,” says McNeil. “But it’s so diffuse it won’t necessarily know it’s connected.”

He cites the example of the Office for National Statistics (ONS), based in Newport, and the Hydrographic Office in Taunton. “They [the ONS] have set up a fantastic data centre that is doing a lot of data mining,” says McNeil. “The Hydrographic Office is a world-class brand, and these are two organisations not dissimilar in size. So you would say ‘they should connect with each other’. So they’ve connected.”

The rise of the professions to greater prominence in the civil service is vital in ensuring a joined-up approach, says McNeil. “You have to have a clear architecture and that’s what we’re building with the professions and functions,” he says.

He explains that Brexit has been a crucial accelerator for the organisation’s work around consistency of functional approach, and on workforce planning.

Back in January the National Audit Office warned that the civil service has failed to recruit enough extra staff to deal with Britain leaving the European Union. Its report said a third of the 1,000 roles created in the new Department for Exiting the EU (DExEU) and the Department for International Trade had yet to be filled, and the posts that had were mostly staff transferring from elsewhere in government.

But McNeil is pragmatic and upbeat about the moves already taken. “I and my colleagues responsible for co-ordination functions across government – commercial, digital and project delivery for example – we’ve been coming together for a number of months talking about how we pull that together,” he says. “We’ve got standard reporting that’s going up to the chief exec of the civil service… of course you’ve got DExEU which is co-ordinating the whole process. So we’re feeding into that and it’s allowing us to do some things that haven’t really happened before.”

One example is “an advertising campaign for policy staff that previously had been done very departmentally,” says McNeil. Another is external recruitment. “The way the civil service works, with a very rigorous approach to recruitment, is that you may get two appointable candidates,” he says. “If there’s only one job the other person is sort of lost… So what we’re now doing is saying ‘that’s a lot of people we’ve deduced are appointable and could move into other roles’. So the challenge is: are the other roles visible? Do we have a good view of the demand?”

Far from Brexit staffing reaching crisis point, McNeil is adamant that workforce planning at the civil service “is actually further ahead than [he’s] seen it in any private sector organisation”.

“I think we will bring people in; we are doing that,” he says. “I am confident. The architecture is being built, it’s sort of being built in real time. I believe we’re keeping up. We’re learning a lot about ourselves; we are an organisation of organisations of organisations. So it’s a complex system and we’re finding ways of getting what we need.”

Key is encouraging people to stay in departments for slightly longer, to build greater continuity. “I think there’s an element where sometimes the culture has historically been that people moved around too rapidly,” says McNeil. HR is tackling this through exploring ways people can be stretched more in post, and redressing remuneration structures that haven’t historically encouraged loyalty.

Also important is attracting more people from the private sector. “We’re doing a combined internal/external campaign for the first time,” reports McNeil, who says he’s confident of the appeal that working in the civil service holds. “Leaving the EU is a unique historical opportunity,” he comments, adding that he’s encouraged that talent is increasingly flowing both ways. “Civil servants are very employable; they could go out and easily do a range of jobs in the private sector. The capability is very high.”

In his own patch, McNeil points to Rachel Coleman joining from GSK to be cabinet office HRD as an example of encouraging signs of cross-sector fertilisation. In line with the boost being given to all the professions, HR at the civil service is now in a very good place, feels McNeil. “What I’m really struck by is that we’re into our generation 1.5 of really able HR people who bring real intellect,” he says. “Last year the HR Fast Stream [the organisation’s graduate programme] had one of the highest pass rates.”

McNeil explains that increased awareness from leaders – in all sectors – of the importance of people issues is helping HR up its game across the board. “The job of the HR professional is to protect amateurs from the counterintuitive. You can say ‘you might think that would work, but actually what do you want to achieve? Let’s think about how we do that.’

“You have to be good as an HR professional at understanding and optimising processes that involve people,” he adds. “But at the same time you have to understand how to optimise interpersonal interactions and help human beings work well together.”

A more sophisticated HR skills base than previously is allowing civil service HR to roll out several key programmes underpinning workforce planning activities, such as leadership and D&I. Vital once again is a joined-up approach.

“Last year we created a leadership and learning board with permanent secretaries and director generals,” says McNeil. “Part of its job is to shape and be the brain of the leadership academy. It’s also looking more broadly at leadership. So we have work on: who is the director general of the future? What does that mean for training and selection?

“I think probably the most important part of my responsibility is that the people coming in as graduates or apprentices will be leading in the 2030s and ‘40s,” he adds. “So what will they need to do that? They need to be rational leaders but also empathic. They need to be curious…”

The organisation launched a new leadership academy in September 2016. “We’ve been doing various pilots,” comments McNeil. “The positive of such a varied landscape is the ability to experiment and pilot in a meaningful way.”

Civil service HR is also currently in the middle of a wide-ranging D&I push. The target is to be the most inclusive organisation in the UK by 2020. It’s imperative that an organisation so involved in public life is representative of the UK population, says McNeil. “We’ve moved the dial on quite a few things, but still not enough,” he says. “We might be in the low- to mid-40s on representation in the senior civil service for women. But that’s still not what the economically active population is. And on other areas like disability and BAME we’re below 4% in the senior civil service.”

Giving each area of diversity a “senior leader, focused full time on it” is crucial, feels McNeil. As is recognising that different interventions will work for different characteristics, and making managers accountable. McNeil adds that the civil service’s inclusivity drive is about professional background and experience as much as gender, race, disability and class. (Across the civil service most jobs are operationally focused, but among the top 4,200 leaders only 15% are from the operational side, with 28% from a policy background.)

Core to all of this centralised HR activity is an awareness of striking a balance between overarching programmes and interventions at a more local level. “We’ve decided to have a leadership programme that runs across the civil service. But that doesn’t mean there’s not important stuff happening in individual departments; they just complement each other,” says McNeil, adding: “Our professions are aware of generating coherence… but I think coherence as a concept is not the same as consistency.”

But there’s still much to be done to enhance the professions in the civil service, not least around HR competencies, says McNeil. He is currently partnering with the CIPD to improve access to HR qualifications, accreditation and research – most recently involving examining what business partnering should look like in the next 10 years.

“That’s throwing up some areas where we have gaps,” reports McNeil. “We know we need to build organisation design and development capabilities. We have OD specialists like we have reward specialists. But actually the person round the table with the business has got to understand that too.”

McNeil is upbeat about what civil service HR, and indeed the wider organisation, is achieving in challenging times. “The UK civil service is a very resilient, adaptable organism,” he says. “If you go back to the 1850s and the Northcote-Trevelyan Report, when the civil service was brought into existence… that was a response to some real logistical failures in the Crimean War,” he says.

“The Haldane Report after WWI talks about women in the workplace – the lessons of that in WWI… So the external environment throws things up that have to be responded to by the civil service. History shows it adapts, learns and moves on to the next thing.”

Regarding the challenge of Brexit specifically, McNeil adds: “This is an accelerator not a catalyst… it plays to the great thing about civil servants; that they’re always up for it.”