How to make the CEO-HRD relationship rock solid 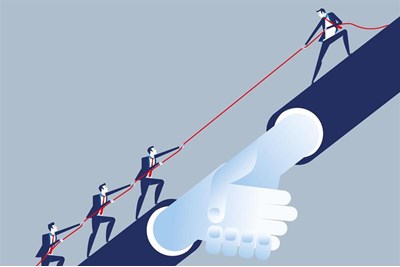 Great article, however, I 'd also suggest that whilst the personal relationship between CEO and HRD is clearly an important part of not being second fiddle, so too is the content of that relationship ...

Rather than HR playing second fiddle to the CEO, there should be bonds of equality and trust

Having spent more than 30 years working with and interviewing hundreds of top CEOs, it’s clear to us that for a company to perform well the relationship between the CEO and HR director must be rock solid. Yet there has often been a dividing line between the HRD and CEO.

HRDs have a different perspective on staff and company culture than the CEO – they are often more tuned in to the workforce and have their own views on what the culture should be. CEOs, meanwhile, have a broad view of their company, industry and how to be successful. For the best results the CEO and HRD must be aligned towards the same goal, possessing a shared vision for the company as both a commercial enterprise and a place people would love to work.

The first thing CEOs must do is cast aside the ‘hub and spoke’ leadership model. Hub and spoke is where the executive team habitually look to the CEO, who stands as the lone hub in the centre of attention. The consequence of this model is that CEOs become dictatorial and execs are unlikely to contradict them. CEOs are often more interested in figures than feelings, making it even more difficult for the HRD.

In place of hub and spoke we encourage a fellowship model. Fellowship sees the CEO as a member of a team, humbly looking to peers that complement what they lack. Fellowship is built on trust, belief and care, and under this model the HR director is a complementary equal of the CEO. The CEO’s task is to articulate a common goal and inspire the fellowship towards that goal. In this culture the HRD and CEO can support each other.

Another virtue of fellowship is that it connects the organisation as a team. Traditional companies have a silo mentality, often stereotyping the HR department as purely functional – thus replaceable. By adopting a fellowship model the equal importance of HR is signalled to all other head of departments and the whole organisation, promoting partnerships between employees and departments.

Here are two ways to get the HRD-CEO relationship flowing:

Fellowships are based on trust. This is rarely given automatically so to initiate the building of trust one might have a courageous conversation: where one party at a time shares something in openness and honesty with the other. You might want to set some topics: what inspired you when you were younger? What hasn’t gone to plan? What event changed the direction of your life? Or let the conversation flow freely. The key is to lower your guard.

We want to see CEOs and HRDs having courageous conversations about the people and decisions that really affect the company. HRDs need the confidence to step in and CEOs need to value the HRD’s input by having the humility to acknowledge that they do not know everything.

In any organisation there are people whose opinion determines the direction of travel and motivates others to move with them. They might not be senior management, but their influence classes them as senior leaders. Large companies could have 40 such people; the CEO and HRD can work together on listing who they are.

The first step is getting everyone connected, which can be done using smart questions about the business and fun questions that help everyone connect as humans. Next, an honest and open discussion about the performance and day-to-day operation of the business, identifying the issues and the senior leaders’ view on how to solve them within a timeframe. Then, the future of the company must be distilled into a common goal. This often starts with the CEO sharing their purpose (from the heart), ambition (from the head) and views about the company’s future winning position. The senior leaders then form smaller groups to give their own views, which are brought together as a shared view.

By the end of the day everyone will leave with a sense of how they will play a part in the future of the company and take that common vision away to inspire the whole organisation.

There are many ways the CEO-HRD relationship can be an essential bond in the fellowship. By ignoring the HRD or keeping a poor HRD the CEO wastes a massive opportunity to potentially build a completely new culture, connect all senior management into that culture and realise their company’s future potential.

Steve Tappin is CEO of Xinfu, founder of CEO Masterclass, NED at Renren and host of the BBC's CEO Guru programme. Matthew Hurst is head of digital operations at Xinfu and an operations consultant for the Academy of Motion Picture Arts and Sciences

Great article, however, I 'd also suggest that whilst the personal relationship between CEO and HRD is clearly an important part of not being second fiddle, so too is the content of that relationship and our courageous conversations. The opportunity here is about putting forward people oriented business strategies, based on what people could do, rather than just aligning people to support more traditional business strategies which tend to depend more on what changes to operations, customer focus or financial management could do. Relationships are essential but not efficient, ie we need the right relationships to put forward these perspectives, but if all we do is develop the right relationships, then what is the point?