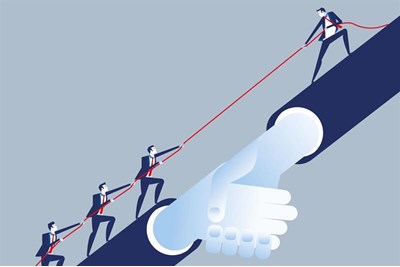 Is it even tenable to run an organisation if only one in five of your employees trusts the leadership team? Most would probably agree not. And yet just 18% of people trust business leaders to tell the truth, according to Edelman’s latest Trust Barometer Global Report.

Meanwhile, in a survey of 1,000 American executives, author Michelle McQuaid found that 65% of US workers would choose a better boss over a pay rise. That last finding has real power: people putting their choice of boss over their lifestyle and perhaps that of their family is a stark indicator of a hunger for more rounded leadership.

At a recent event in support of Pilotlight we asked an audience of HR leaders how we might develop more complete leaders. Nick Creswell, global head of talent at Ørsted, noted: “You have to articulate really clearly what leadership means to you as an organisation, what the exec expects of the organisation’s leaders, and what the exec themselves are doing to live the behaviours they recommend.”

Alice Breeden, partner and global lead for organisation and team acceleration at Heidrick Consulting, drew on her time as director of people operations EMEA at Google: “You’re pivoting your business every minute. By the time that person you’ve hired is in their team has changed, their purpose has changed, and the activity they were hired to do has changed. So what do you do to anchor them? You 'over-index' on what it means to be a leader.”

Google does this by focusing on three things: mission, transparency and voice. Firstly, it’s being very clear about your mission – and translating it to individual purpose: “Intentional time carved out to connect individuals with purpose is key,” Breeden said. Secondly, leaders are expected to be transparent – to share both personal information and information about their purpose. And thirdly “it’s important that leaders feel they have a voice, and create that for those around them too,” she said.

That is a rare skill: creating space for others to have a voice. Not least because our template for leaders has for decades assumed the excessive power and influence of their voice, rather than others'. Could this be the distant but definite sound of tectonic plates shifting?

While competence and a confidence that leaves its ego at the door are key for leaders, as HR director at Brunel University London Jane Drysdale pointed out, they’re easier to build through training and experience than connectivity, which she described as “understanding the drivers of the other person, appreciating difference, and different agendas".

While that may be something we instinctively agree with, how can leaders achieve and maintain that connectivity?

Peter MacKenzie, head of talent and leadership development at Lloyd’s Register, touched on this when he challenged the debate’s title: “Do we in fact need less complete leaders? When you become a leader you need to let some of the stuff you’ve learned leak out, rather than just keep filling up – to give yourself space to focus on thinking, noticing, getting patterns together and getting people together.”

So it’s about making those links, making those connections… But to what purpose? As James Walters, chaplain and senior lecturer in practice at The London School of Economics and Political Science, said during another recent The People Director Partnership debate: “Leadership draws communities into dialogue – and enables them to see the whole. Trying to see the whole is essentially the meaning of real leadership.”

Those two neat sentences imply a style of leadership much more relevant to emerging forms of organisations – whether teams scattered globally, individuals drawn into the organisation temporarily for specific projects, or different communities beginning to find a voice. They assume a form of leadership based on consensus – drawing communities rather than obliging them – and involving dialogue, which is going to be a challenge to any leaders who still think they’re there to deliver monologues while everyone else gapes in awe.

As for ‘trying to see the whole’, as business and society grow more segmented, more detailed in their understanding of what they and others want, and more polarised too, perhaps that’s an ambition that sounds less like something merely noble and more like something necessary.