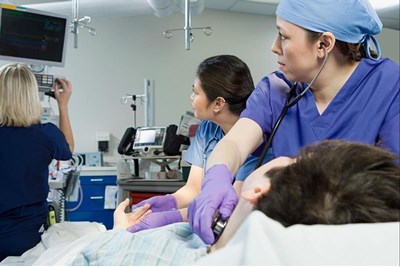 Hancock told The Telegraph that he believes the use of non-disclosure agreements (NDAs) in the NHS is "completely inappropriate".


"Whistleblowers perform a vital and courageous service for the NHS and I want more people to feel they can put their head above the parapet,” he said.

“Settlement agreements that infringe on an individual’s right to speak out for the benefit of patients are completely inappropriate. Making someone choose between the job they love and keeping patients safe is an injustice I am determined to end.”

From 2017 to 2018 356 NHS whistleblowers said they had experienced a range of negative reactions, ranging from 'subtle' punishments such as being denied career opportunities to being unjustly fired. Among the worst affected are doctors, many of whom say they have been sacked for speaking out about malpractice such as bullying, faulty medical equipment and unsafe staffing levels.

However, Paul Quain, senior partner at GQ|Littler, told HR magazine that Hancock's announcement regarding the NHS holds little weight. “This is a strange announcement from Matt Hancock. It seems to repeat the spirit of an announcement his predecessor Jeremy Hunt made in 2013. The law already ensures that settlement agreements cannot prevent whistleblowers from making disclosures. The problems in the NHS seem to arise from cultural and institutional factors, not legal issues or the terms of the agreements it is using," he said.

Danny Mortimer, chief executive of NHS Employers, agreed that there is already legislation in place surrounding whistleblowing. “The NHS has put in place roles in every organisation which support staff to speak up about unsafe care," he said. "Working with the law firms who advise the NHS we have provided clear guidance to employers regarding settlement and compromise agreements, which explains that it is not reasonable to seek to prevent staff who sign such agreements from raising concerns.”

The use of NDAs has come under fire recently after a series of high-profile cases across different sectors. Last week the BBC revealed that UK universities have spent around £87 million on payoffs to staff that come with NDAs since 2017.

In 2018 MPs and campaigners called on the government to overhaul whistleblowing laws. This was followed in March this year by business, energy and industrial strategy under-secretary Kelly Tolhurst announcing plans that would prevent employers from using NDAs to cover up wrongdoing, amid concerns that some are using them to prevent employees from speaking out about bullying and sexual harassment.

Quain said that despite the negative press surrounding NDAs, employers should not scrap them altogether, as that could lead to further legal problems. "[Employers] would throw the baby out with the bathwater and make employment disputes more difficult to settle," he warned.

"Employees would find themselves suing their employers more frequently and incurring greater legal costs. Employers should of course use these agreements responsibly, but they are generally beneficial for both sides. Confidentiality clauses in settlement agreements are often requested by employees as a way of protecting themselves. They do also provide organisations with some comfort that a financial settlement will prove the end of the matter."

Quain added: "Employees can already make disclosures to regulators, report crimes to the police or indeed press charges regardless of what a settlement agreement says, and the government is likely soon to make this even clearer in proposed legislation. Employees must also take legal advice before signing so they should be well aware of their rights.”

Misunderstanding of the term NDA is creating more confusion, Quain said: “The constant misuse of terms in this area risks confusing the debate. What is really under discussion here is confidentiality clauses in settlement agreements not NDAs, which are typically separate documents requiring parties not to disclose confidential information or 'gagging orders', which are court orders preventing disclosure of certain information.”