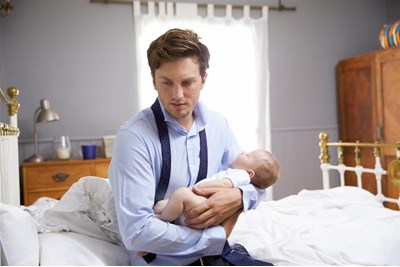 My experience is that many men will not use SPL because of concerns not connected to finances, although I am sure this is true for some. Employers have focussed their effort on supporting women in ...

Almost half (48%) of fathers would not use Shared Parental Leave (SPL), with the majority citing cost as a key barrier, according to research from Working Families.

SPL is paid at the rate of £140.98 a week or 90% of average weekly earnings, whichever is lower. This is the same as maternity leave but, crucially, the first six weeks of maternity leave are paid at 90% of whatever is earned with no maximum.

The Working Families research coincides with a report from the Women and Equalities Committee that looks into takeup and evidence from fathers on their experiences two years since the scheme was introduced.

Many fathers cited affordability issues as behind the still low takeup of SPL, estimated to be between 2% and 8%.

“SPL appeared pointless to us (and probably most relationships) post-birth because I’m the breadwinner and it makes no financial sense, as we struggle financially already," one father commented. "Hence the predicted 2% to 8% takeup. It sounded fantastic until you read the small print. Men should be allowed a longer period of full paid leave like women can be entitled to.”

Another father cited a markedly different approach towards fathers in his workplace than towards new mums, suggesting there is still stigma attached to men taking SPL.

"While there was a form to complete at my workplace to formally apply for shared parental leave, the implication of taking it was that [the] workload would not be reduced at my unit of work, nor [my] responsibilities passed to others. I would simply have received less pay for holding down the same workload," he stated.

"This differs markedly from my wife’s experience of maternity leave where her workload had to be delegated to others as she would not be at work for a protected period of time, and where a formal written plan was required with her line management to document the transfer of workplace responsibilities during her protected maternity leave, with a subsequent return to work plan."

Sarah Jackson, chief executive of Working Families, said the government needs to do more: “Families are unlikely to make use of SPL unless it makes financial sense for them to do so. The government should consider equalising statutory maternity pay and shared parental pay to prevent SPL being a second-class option and encourage more fathers to use it."

Chair of the Women and Equalities Committee Maria Miller agreed: “Fathers are questioning whether it works for them in practice, and that is a concern,” she said. “Whether it be the financial implications of taking up SPL or the attitudes and culture of employers, this policy may not be having the intended effect."

The Working Families research did, however, reveal some progress in changing attitudes. A third (36%) of the 52% who would use the scheme wanted the chance to bond with their child. An additional 25% cited their partner wanting to share childcare, and 10% said taking advantage of SPL would help their partner’s career.

My experience is that many men will not use SPL because of concerns not connected to finances, although I am sure this is true for some. Employers have focussed their effort on supporting women in the work place, which was needed, but need to set the record straight by offering more support for men. This includes addressing the issues that currently prevent many men taking SPL. They need to create an environment where men can be 'vulnerable' - expressing more emotional needs.