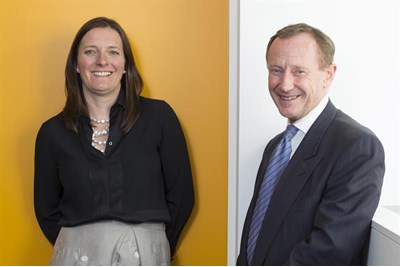 What shape is your organisation? The answer is probably a pyramid. People start at the bottom then, not unlike those Egyptian slaves who built the original pyramids, they toil over many years, giving blood, sweat and tears to reach the top.

But things are changing, with the concept of a linear career ladder beginning to look somewhat out of date. Goodbye pyramid; step forward the networked organisation.

If you’re looking for an example of such an organisation, with ‘communities’ of professional disciplines collaborating on a project-by-project basis, you might think the best bet is heading to Silicon Valley. You’d be wrong. The answer lies in Hull, at communications and IT services provider KCOM, which is on a journey to becoming, in the words of chief people officer Clare Dyer, “a flat, networked, non-hierarchical organisation”.

The driving force behind this journey is chief executive Bill Halbert, who HR magazine meets alongside Dyer at the firm’s London office. “It’s a passion of mine, and has been throughout my career,” Halbert explains. “Most organisations operate on the basis that people have fixed roles, and the organisational shape is a pyramid. Therefore the only way people can think about their careers is by climbing the pyramid, which means they lose any specialism they had. To progress you have to be a generalist, but it seems to me we’ve got it wrong. We should think of careers as a rectangle, not a pyramid.”

He speaks from personal experience. “Early in my career I was lucky enough to keep getting promoted,” he recalls. “Then I woke up one morning and thought ‘why would they make me a general manager when I was enjoying what I was doing? Why can’t I keep doing it?’ I left that organisation for that reason.”

For Halbert the obvious alternative, and a model he has implemented in a previous CEO role at Syntegra, BT’s consulting and systems integration subsidiary, is “to create an environment where people are rewarded and feel supported in a professional network”.

Dyer, who joined KCOM from the BBC just over a year ago to help Halbert achieve his organisational architecture ambitions, agrees the time has come for change in how organisations are structured.

“The way we run organisations and work is not fit for the future,” she says. “In this world, as an HR professional you have to be curious and experiment. I think all the things we have learned historically and hung onto in terms of organisation design just aren’t fit for where we are moving to.”

KCOM works on solutions for highly complex problems for its corporate customers, and that requires collaboration at all levels and across every one of the company’s 1,700-odd people. “Our customers don’t really know what they need and how to solve their problems. We need to maximise all our brainpower and capability in the organisation regardless of hierarchy,” says Dyer. “We need to take away barriers. No one person has the answer; it’s collective thought that’s important.”

“The hierarchy is not how work gets done,” chips in Halbert, adding that on a recent “hugely complex” project for HMRC people across the business “found each other, got together and did it”. “The range of technologies required had never been integrated anywhere before, but people came together in a natural network. It didn’t happen because of a hierarchy.”

What’s required now is to formalise that process, and for HR to truly understand how work gets done beyond the org chart in order to facilitate this coming together of expertise. In Dyer’s words: “We want to understand who connects with who, who gets what from who, and how work gets done. And we have the data science nowadays to be able to analyse that.”

“It’s about how do we systemise the natural osmosis and make sure it happens and is designed to happen every time,” adds Halbert.

To do this KCOM recently partnered with consultancy Complete Coherence to carry out an organisation network analysis. The seven simple questions (looking at areas like where people go in the business for guidance, information or stretch) elicited a 92% response rate. “There’s a massive amount of data science behind those simple questions,” Dyer says, advising that any HR leaders wanting to carry out a similar analysis must be “really focused” on the questions they ask and the outcomes they are trying to achieve.

Early insights include discovering that parts of the business critical to delivering strategy are only “tenuously connected through one or two people”, allowing for silo-busting interventions. “We also discovered lots of mini communities, often not where we expected,” Dyer adds. “Professional communities are new and the lever to creating our new networked business. There’s still work to do on getting [colleagues] to operate as a community.” One immediate win has been being able to see how the most successful salespeople affect the whole organisational network, enabling HR to refine and improve sales recruitment and development.

The analysis also revealed a “leadership echo”, Dyer adds, with the vision of the executive team not travelling through the organisation. “You have to think: Does everyone understand where we are trying to get to and how their work contributes to it? In a world where there’s less of a hierarchy and people are moving around different projects, understanding the outcomes we need and your part in contributing to that is really important.”

As Dyer’s words allude to, the cultural piece is critical here in reimagining the organisation – and it may not be an easy shift for everyone. “Most organisations have a role-based culture, where you value your worth based on your job role,” says Halbert.

“We’re trying to shift that to a competence-based culture, where your value is based on applying what you are good at. That means changing the norms most people have grown up in.”

“It’s going to require time, effort and energy with the leadership team,” acknowledges Dyer. “For some it will be a mindset shift. It’s no longer about ‘my piece’ of the organisation; it’s about ‘what am I accountable for and how do I bring together the people around me to deliver those outcomes?’” And, she adds, as KCOM is not a Silicon Valley start-up – rather its origins can be traced back to 1902, when the Hull Corporation was granted a licence to set up a telephone network from the postmaster general – this is about “shifting from one world from another”.

“It’s not something that’s going to happen overnight,” agrees Halbert, pointing out that although he wants to ditch the hierarchy of a traditional organisation this must be done within a framework, and that inspirational leadership remains as critical as ever. “I’m not sure I’m a big fan of some of the things that happen on the West coast [of the USA],” he says, alluding to movements such as holacracy, as adopted by online shoe retailer Zappos. “You have to have a framework that people understand – a network rather than a pyramid. We still need leadership; leadership is inspiring the organisation through vision and strategy. But it isn’t close supervision and management. In the organisation we are building people do that for themselves. We need leaders; we don’t need hierarchical managers. That’s the difference.”

Clarity of purpose is everything, both agree. “In a world where you need it to be more fluid, flexible and ambiguous, knowing what you are trying to deliver and who’s accountable for what gives people freedom to self-manage within that,” Dyer explains. “It’s not about being completely fluid. The business needs to deliver results to our shareholders, we need that line of sight.”

Halbert also believes, and has seen through his own experience of working in fully networked organisations, that this way of structuring work increases motivation and productivity. “In a traditional hierarchal organisation, the effective utilisation of the skills base is probably no better than 40%,” he hypothesises. “I think you can shift that to something like 60% doing this. That’s a massive gain in productivity.”

For Dyer, as an HR specialist, the opportunity shifting to a networked organisation provides for people experts is “really exciting”. “I think HR has come into our moment,” she says. “It’s taken us a while to find our sweet spot, but we’re in a position now where we are able to get that meaningful data and insight.”

Halbert sees HR as “part of the business and part of what we deliver to the customer”, and can see a time where the HR team becomes fee-enabling, offering a consultancy service to KCom’s customers going through big IT change projects. “We are delivering new ways of working, not just the technical skills of an IT system,” he points out. “About 60% of the failure of major IT projects is to do with the way people adapt rather than the system. That requires HR expertise.”

“The role for HR professionals is to help organisational design perform in the best way it can,” concludes Dyer. “It’s diving into a space where it’s more ambiguous and we have to be systemic thinkers, focused on outcomes. Org charts and structures give us comfort, but they don’t give us a true picture. If we step away from them we can get so much more.”