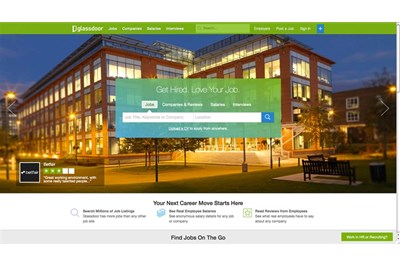 Online careers community Glassdoor is now a more trusted source of career information than employers and the government.

Glassdoor, the online career community, is now perceived to be a more trusted source of career information than employer-produced collateral, career guidance, government statistics, and recruitment agencies, according to a report seen exclusively by HR magazine.

The research, conducted by Tom Lakin, director of Career Design Coaching, found that the website was the third most trusted source of information.

The site, founded in 2007, allows users to post reviews of company culture, wage information and messages to management teams. Glassdoor launched in the UK in 2013.

Employers are not able to remove bad reviews, but they can respond to them. Lakin’s research found that appeared to raise the perceived trustworthiness of the site, with 65% of those surveyed agreeing that this policy had a positive impact on how trustworthy they believe it to be.

Lakin told HR magazine he believes this to be the first major academic study into Glassdoor. He surveyed users, analysed online content and carried out focus groups to discover what employees and jobseekers thought about the website.

He said that in every group he interviewed there was a perception that people might use the site to complain. “They were focused on the idea that angry or disgruntled employees might go there to have a moan,” Lakin said. “However, that isn’t true. The aggregate scores indicate that most people leaving reviews are pretty satisfied.”

He added: “Nobody mentioned the idea of a ‘brand fanatic’, someone who is obsessed with the brand and leaves a misleadingly positive review.”

Lakin said that user-generated content is becoming “more significant”. “I read reviews on TripAdvisor before choosing where to eat,” he said. “We sit at our desks 40 hours a week, so having the opportunity to make a more informed choice is compelling. People are using Glassdoor as another source of information before making a big decision.”

Glassdoor’s head of communications for Europe, Joe Wiggins said employers should view the site as a “source of feedback; like a free focus group”.

“People are more cynical of information they read that has been constructed by companies,” he added. “They look for other sources of information.”

Employers can use the site to monitor engagement. Wiggins revealed while about 40% of reviews on Glassdoor come from former employees around 60% are from current ones. Firms can sign up for an employer account, which allows them to track trends and respond to comments.

“It’s interesting to try and get a view, the same way you would with a customer,” he said. “You do market research about your brand – why not with your employees? What is the market saying about your employer brand?”

He added: “I know potential employees are probably going to go onto Glassdoor and see what people are saying. You need to know if their reviews match up with what you say. It’s another source of information, and I can choose to ignore it or I can choose to use it.”

“Companies understand you cannot control your message any more,” concluded Wiggins. “Your employer brand is what other people are saying about you.”