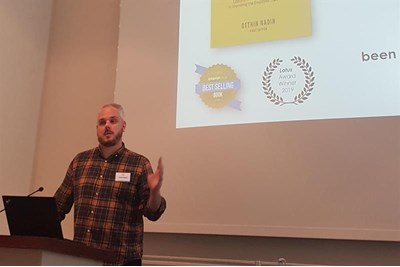 Speaking at an HR Taskforce event, psychologist and author Gethin Nadin shared some of his top tips on creating the best possible employee experience

The director of employee wellbeing at Benefex and author of A World of Good gave this advice to employers and HR:

Empathy is fundamental to design thinking, said Nadin. He pointed out that brands such as Netflix, Google and Microsoft have been able to harness this by creating products that are easy to use and can make suggestions based on our preferences.

“If you look at how big organisations design their employee experience empathy is always at the forefront. Empathy is a really important part of designing a product, especially when it comes to technology. A good example of this is Netflix... they only show films they think you’ll be interested in on the homepage,” he said.

Genuine empathy is rooted in action, he added. “People confuse sympathy with empathy quite a lot. It’s very easy to sympathise," he said. "Real empathy is about more than the words we say – it’s about actions.

"Design thinking as a concept is thinking about creating something with human beings in mind, and recognising that we’re actually quite lazy and don’t like putting a lot of effort into things. This can be useful for the onboarding experience, when we need to think about how people want to feel when they join an organisation.”

Looking at where you might be falling short is just as powerful as focusing on what you're doing well: “It sounds really simple but sometimes working out where the problem lies, and admitting that you as employers did something to someone to make them feel bad about themselves is important.

“Organisations can sometimes do really good things for people; they’ll put in huge amounts of effort around wellbeing and give people discounted gym memberships. But then what can really upset someone is actually an HR policy.”

Expenses can be an area where organisations slip up, he said. “There’s a lot of research into expenses and the effect that can have on employee wellbeing. When I was younger I remember being really annoyed with the way one of my first employers dealt with expenses.

"I was expected to pay for all of my petrol and hotels upfront. As a 22-year-old on a low wage that made a huge dent on my income, and I had to dedicate a huge chunk of time to paperwork.”

“If you look at why people leave jobs, a lot of the time it’s because the job they’re doing isn’t what they expected," said Nadin. "If how you're advertising employee experience doesn’t match up to the reality you will see people drop off. If you set your expectations really high, and if they are not maintained, you will see people become disengaged very quickly.”

This can happen from as early on as day one of someone starting at an organisation if their experience isn't good, warned Nadin.

“On someone’s first day that person might expect to fill out some forms, meet people, get settled in, and they might be given a laptop and a phone," he said. "But if this person’s experience was that actually IT didn’t do much – so they were without internet access for the day – and the person who was assigned as a buddy wasn’t in, you’ve already got someone who has gone from feeling excited and nervous, to having a very poor experience of the business very quickly."

Don’t design with individuals in mind

While thinking about differences between employees can be useful, too much focus on individuals can stop HR from introducing policies that will benefit the majority. “Sometimes we can design HR policies for bad apples. When it comes to designing employee experience don’t think too much about the individual you’re designing it for,” Nadin said.

“One example of this is flexible working. We all know that it’s a great thing to do, but there’s always someone who’ll say ‘I don’t want to introduce it because I have a colleague who I know will take the piss'. But if we’re designing it for that person then we’re ruining the experience for everyone else. The bigger question is: if you don’t trust them why did you hire them in the first place?”