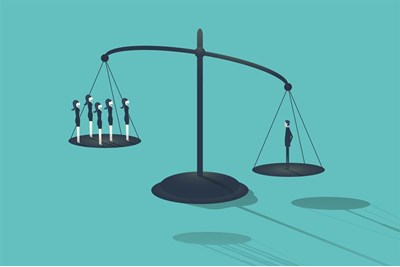 Though the survey results come as no surprise at all note the scale of the problem - latest government data from the Annual Survey of Hours and Earnings (ASHE 2016) male full-time employees were ...

More than a quarter of UK senior personnel do not see the gender pay gap as an issue for businesses, according to research by HR and payroll provider NGA Human Resources (NGA HR).

The Fawcett Society currently calculates the pay gap to be 13.9%. However, 29% of those surveyed said they do not see it as a problem.

Men in senior positions were found to be much less likely to see the gender pay gap as an issue than women. A third of men (35%) said it was not an issue, compared with a fifth of women (22%).

The fact that women are more likely to take career breaks (49%) or work part time (42%) were identified as the main factors for pay disparities. Other reasons for the gender pay gap that were suggested were the lack of representation of women in the overall workforce (20%) and fewer women in senior management positions (27%).

To combat the gender pay gap pay levelling (benchmarking pay across levels, assigning value to individual positions and ensuring that men and women are paid the same at each level) was seen as the number one solution (57%). There was also significant support for back-to-work schemes (49%) and positive recruitment programmes, such as the government’s Budget funding for returnships (47%).

Geoff Pearce, managing consultant of reward at NGA HR, said that businesses must take action if there is to be progress in closing the gap.

“It is cause for concern that a significant proportion of business leaders still do not take the gender pay gap seriously," he said. "While compulsory reporting is imminent, progress towards closing the gap will only be made if firms are prepared to put meaningful programmes in place. The government’s recent funding for returnships is a step in the right direction, yet it is up to individual businesses to develop them if the pay gap is to be reduced for good.

"By addressing their pay gap organisations will not just have good figures to report on paper, but the commercial benefits of a diverse and fairly remunerated workforce – improving performance, productivity and profitability.”

Petra Wilton, director of strategy at the Chartered Management Institute (CMI), said that gender balance in business is essential for boosting the UK's low productivity levels.

"The government’s gender pay gap reporting regulations will certainly help improve the situation, shining a spotlight on this issue and encouraging employers to set targets for change," she said. "However, as it stands businesses are failing to achieve a balance of men and women in senior management roles, or to attract and retain women to some of the better remunerated occupations. It is now up to management teams to lead by example."

Gender pay gap reporting regulations come into effect on 6 April. Employers will be required to publish information on their gender pay gap and gender bonus gap on an annual basis. While employers must collect data from April 2017 they do not have to publish it until April 2018.

And are we surprised? Of course men don't see it as an issue - it doesn't affect them. And again, women are being blamed for being under-represented. How dare they have children. Don't men have children too? Until greater value is given to the contribution made by women to organisation, their distinct and different ways of work, their talent and their potential, nothing will change.

Men don't see it as an issue as it is not an issue, but the usual whining about poor woman being done down on every issue under the sun by men- grow up

If you work in organisations designed for men, then of course men and up doing better. This is NOT about women whining, it's about organisations seeing that difference is actually valuable, and making an effort to become top performers. Top performers are invariably gender balanced, so you need to make an effort to pull women up too. That may require changes in the organisational culture and systems so they work as well for women as they do for men. Only then will you get the benefits that are proven - time and again - that mixed gender teams bring. This is NOT us against them. Some men are paid better than others. When pay is made fairer it will be better for most men as well.

Though the survey results come as no surprise at all note the scale of the problem - latest government data from the Annual Survey of Hours and Earnings (ASHE 2016) male full-time employees were found to earn more than their female counterparts for 96% of all (3 digit) occupational groups for which data are available - figures are for all employees it is true but shocking nonetheless - maybe the new regulations in this area could finally yield a result for equality nearly 50 years after the equal pay act was first introduced in the UK! - though obviously people like Donald may prefer it no to be the case.

Inge - you make an interesting observation that organisations designed by men will give men an advantage. It tends to be men that display certain characteristics of 'masculinity' that have excelled. This suggests that the problem isn't equality or diversity but men themselves. The solution therefore also starts with men. The D&I agenda has focussed away from men. It should be looking to help men develop 'vulnerability' which will promote inclusive leadership. They should encourage paternity leave in a way that hasn't been done before and offer solutions to be active fathers. If these men were rewarded for these characteristics the traditional 'masculine' traits would soon disappear, as would the reasons why D&I initiatives get slowed down.