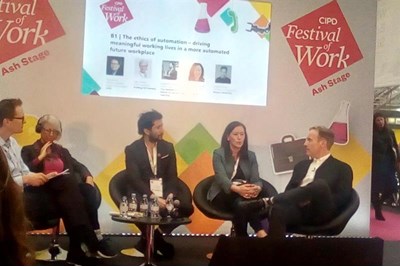 AI can only be used fairly if it is rolled out in a democratic way said Kate Davies, chief executive of Notting Hill Genesis.

“When looking at stories like Cambridge Analytica we know that technology can be used for evil. At the same time we know there’s a lot of capability for good and enjoyment too. The only way we can really make this work is if technology is used democratically, and we don’t just have it imposed on us," she said.

"Part of this is about being able to speak out if we don’t like the way technology is being used, otherwise we could be in danger of living under a police state. If we make enough of a fuss corporations will listen to us.”

Warren Howlett, head of HR content at the CIPD, said that improving job quality should always be the main aim when introducing AI into work.

“Sometimes people don’t like talking about ethics and AI because they're too closely associated with pessimism. AI can take away the mundanity of work and allow people to concentrate on tasks that are more skilled and interesting, and will lead to organisations performing better financially too,” he said.

“In the 1930s the CIPD was called the Welfare Workers' Association. It’s really important to keep people like Joseph Rowntree in mind when thinking about work changes, and make sure we are always aiming for dignity and making people’s lives better."

Recognise that AI is not a silver bullet

Alejandro Saucedo, chief scientist at the Institute for Ethical AI and Machine Learning, said that it is crucial to recognise AI’s limitations. He gave the example of Uber’s use of facial recognition, which led to the company being accused of discrimination after one of its black drivers was barred from the app because the software didn’t recognise him.

"Cases like these really show that we can’t put AI at work in the hands of tech and IT professionals. HR, and people who understand our industry, must be involved.”

Be transparent about changes

The retail sector has been forced to acknowledge its problems and other sectors can learn from this, said Suzanne Harlow, chief executive of Jack Wills. “To be a responsible leader you need to think about the messages you are giving to your workforce. Retail used to be seen as a 'glass half-full' sector. We’re dealing with a flat market, moving from bricks and mortar to online, and rising costs. We need to be mindful of this while keeping our stakeholders, customers and people happy,” she said.

“But when I’ve been transparent and open about what these changes might mean for employees I’ve been genuinely surprised by how they react once they know the facts. Just look at what technology is working, and what isn’t, and include your people in that conversation."