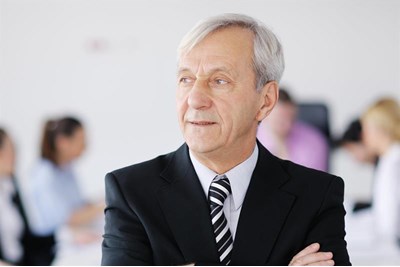 1. The ageing population is a global challenge

In her keynote speech Conservative MP and minister for women and equalities Penny Mordaunt recognised that an ageing workforce is a global challenge, and urged governments to do more to engage the older workforce, who are often left behind.

She pointed to research from Age International showing that in the UK alone more than a million people between 50 and the state pension age have had to leave the workforce involuntarily as a result of age-related bias or poor understanding among employers. “It’s important that older men and women are given the support and respect they deserve. Around the world people are living longer but all too often, particularly in poorer countries, older people are being left behind," she said.

In the talk 'Productivity: Will the Robots Steal Our Jobs?' delegates aired mixed views about the threat of AI. When asked how likely it would be that robots take over all jobs, 10% of delegates said likely, 70% said it is perhaps likely, and 20% said not likely. Speakers throughout the day agreed that data and technology could be invaluable in helping to increase access to information and to financial advice, but that when it comes to caring human beings cannot be replaced.

“When AI and technology are good is when you have lots of data – to automate financial advice and inform advisers themselves. The one thing AI and technology can’t deliver is empathy,” said professor Martin Green, chief executive of Care England.

Speakers also highlighted that a number of jobs taken over by AI would be in the domestic sphere rather than in industry, meaning that older people could have more time to learn new skills and embrace lifelong learning.

Janet Morrison, chief executive of Independent Age, highlighted that in the UK there are currently 90,000 social care vacancies and a staff turnover rate of 30% per year. To make improvements there needs to be a consistent approach across sectors, and it needs to be treated with the same urgency as changes to preserve the NHS, she said.

“Social care is at a tipping point,” she said. “We need to integrate health, housing and transport policy to enable improvements. Of course we love the NHS, but we need to love social care just as much. We need politicians to be brave about setting the choices we have in social care and our means to pay for them.”

4. We need to talk about the menopause

Yvonne Sonsino, innovation leader at Mercer, set up a drop-in ‘menopause café’ at the event. She said that much more could be done to make the menopause an accepted part of later-life working. Employers could help by pointing women to a number of simple effective treatments such as cognitive behavioural therapy, which results in a 65% reduction of treatments after just six weeks, she reported.

5. Too much emphasis on intergenerational differences can be harmful

Despite widespread coverage of how generational differences play out in the workplace and beyond, speakers throughout the day agreed that older and younger workers face similar challenges. “The inequalities within generations are bigger than the inequalities between them,” said David Sinclair, director of the ILC-UK.

Freelance journalist Marie Le Conte criticised the government for placing too much emphasis on formal higher education, stating that university is no longer the desirable option it once was for young people. She added that politicians need to do more to engage young people about the future of work, arguing that many might not want an outright ban on zero-hour contracts for instance, because of the flexibility they offer.