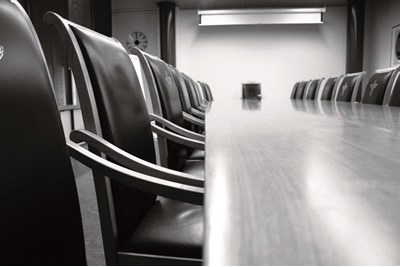 I have had much discussion amongst aspirational ladies over the quota debate , and whilst really disliking it for the stigma that it carries, I have to agree that it is most likely the only way to ...

There are now no all-male boards in FTSE 100 companies, marking a watershed in women’s representation. So why are these successes not mirrored in the public sector?

But the successes of the FTSE 100 are not mirrored in the public sector. Despite a number of government interventions since 2010, representation of women, ethnic minorities and those with disabilities remains challenging to say the least.

In health, although women account for 77% of the NHS workforce they hold only 37% of board positions. A mere 30% reach the position of chair, compared to 70% of men.

In policing, the picture is even bleaker: the system of elected Police and Crime Commissioners (PCC) introduced in 2012 was driven by the need for greater transparency and public accountability. But the elections resulted in only six women PCCS compared with 35 men.

Combined with a total lack of representation of ethnic minorities this led to the system being described as a “monoculture”. And it makes the government plans to extend the remit of PCCs to include all emergency services concerning, to say the least.

In spite of the fact that there are around 22,000 schools in England, governed by an estimated 300,000 volunteer governors, we have no idea how representative these boards are. No statistics have ever been kept.

Since September 1, 2015, schools have been required to post certain information regarding their governing body on their websites. The Department for Education is currently looking at ways that this can be made easier, but there is no indication of how this will be monitored or whether diversity data would be gathered at any point.

The government’s current emphasis on recruiting people with “business skills” as school governors runs the risk of creating exactly the same issues around diversity as have occurred in corporate public boards – the very same issue that the FTSE 100 project sought to eradicate.

Quotas or no quotas?

The FTSE report is impressive, not least because it demonstrates what can be achieved without the introduction of quotas. But it also indicates that achieving diversity on boards doesn’t come without hard work and collaboration.

Lack of supply of qualified female candidates is often quoted as a reason for the lack of diversity on public sector boards. An important part of the FTSE 100 experience lay in encouraging and supporting the pipeline of women as potential leaders. It carries the additional benefit of encouraging women to fulfil their potential on merit rather than relying on quotas to do the job.

The substantial body of research into quotas – largely relating to their use in political appointments – has shown that although they act immediately, they also have the potential to reinforce the status quo. This is because they recruit a “particular type of candidate”, which then provides too much “group think”.

Group think is recognised by psychologists as being a strong desire for harmony or conformity within a group which can result in an irrational or dysfunctional decision-making. In the worst case scenario, members go to extraordinary lengths to minimise conflict by suppressing dissenting viewpoints and isolating themselves from “outside influences”. In the case of boards, the phenomenon is found far more frequently in those that lack diversity in their membership.

Research suggests there are also problems in the appointment process: organisations often employ a narrow definition of experience, essentially seeking candidates with prior board or executive experience. This restricts the access of qualified female candidates, whose backgrounds might not fit this narrow profile.

Interpersonal dynamics are often found to play a part, largely in terms of recruiters’ preference for similar candidates and narrow perceptions of who fits and who doesn’t. Social capital and relationships have also been found to be critical and organisations such as Women on Boards (WOB) have been set up to provide formal and informal support through referencing and sponsorship.

There is little doubt that diversity on boards is a good thing. A recent report by McKinsey argued that advancing womens’ equality could add US$12 trillion to global growth.

Other evidence shows that companies with mixed boards outperform those with all male ones. There is also substantial evidence to support the fact that women also bring particular skills to the table.

Evidence from the FTSE 100 project shows that mentoring works and organisations such as Women on Boards provide a number of events which hone and refine the ability of women to rise to the challenge of chair from initial introductory sessions on pathways to directorship and access to board vacancies to guidance on crafting your CV and a full mentoring service.

But it’s not just about ‘opening’ doors for women , the kind of boardroom cultures that greet them when they are appointed are also important factors in retaining female non execs and chairs. The Mothers of Innovation report (2014), evidences the fact that the mentoring process is just as important once in post-if not more so- as it is in the period leading up to taking on a board role. A report published in 2008 looking at transforming boardroom cultures in STEM subjects recommended a number of strategies in relation to access including the development of board members and boardroom practices, exercises to promote team building and explicit guidance on the conduct of board members during meetings.

So, with ample evidence that women on boards increase performance how can the public services replicate the efforts made by their FTSE counterparts to ensure far greater diversity on public service boards?

But in times of austerity when women have been hit hardest by cuts to public services, who is responsible for rebalancing the Boards? Should we be reliant on and developing more external mentorship programmes such as the one offered by WOB, or should the responsibility fall to HR within public service organisations to make the change?

Jacqueline Baxter is lecturer in public policy and management at Open University Business School. Her research interests lie in the area of public service policy and management where she is currently investigating the governance arrangements of four services: fire; police; health and education. her most recent publication is a book for Policy Press: School Governing; Policy, politics and practices, due to be published in January 2016.

I have had much discussion amongst aspirational ladies over the quota debate , and whilst really disliking it for the stigma that it carries, I have to agree that it is most likely the only way to get the capable women a seat at the table quickly enough to have the impact that we know they can have in the performance of a business. I do see another issue - and that is the women themselves, many lack the resilience and self confidence that it takes to face the battle to the top. I do sometimes feel that there is an assumption that it is easy for men to get there - I know plenty of men who would argue that point. But women are dogged by a life time of seeing themselves in a certain way and a big issue is looking foolish in front of men for fear that this will reinforce the deep down belief that many men think women are less capable. The public sector is male dominated and as the old school males retire to be replaced by younger men who have grown up in a different world, we should see a difference in the balance. However I fear that we wont because the women lack the self esteem and belief to put themselves forwards. This is where we need to focus the fight , then we will see women putting themselves in the pathway of more opportunites and the balance changing.

You make some very good points there Penny - I agree. Once on boards the story does not end there. The challenges are often just beginning ! Some organisations recognise this - Women on boards runs sessions in various aspects of public boards and the challenges of these roles. What concerns me at the moment is also the dearth of stats on some boards: education for example. The DfE unbelievably keeps no stats , so we have no idea how what the representation is of , for example , gender , ethnicity , disability. This added to the fact that training funding has been removed , makes this a serious area of concern.